The Unveiling of the War Memorial - 100 Years On. 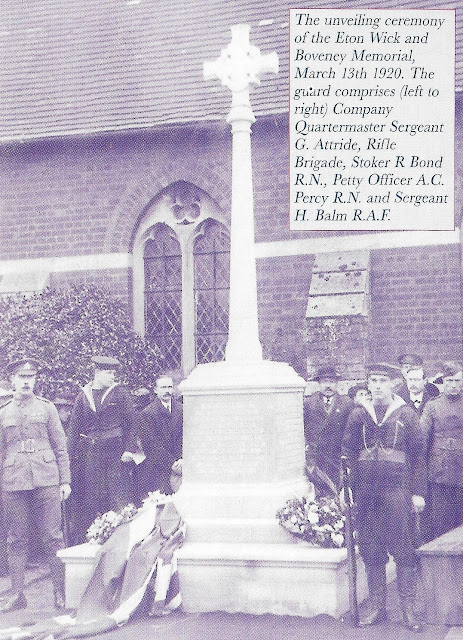 At 3.45 p.m. a procession of ex-sailors and soldiers marched from the Eton Wick and Boveney Institute to the cemetery. The members of the National Federation of Discharged and Demobilised Sailors and Soldiers being under the charge of Mr S. Binfield, a late sergeant of the R.A.F….. on arrival at the cemetery the men took up positions facing the Memorial that was draped with a Union Jack. At the four corners stood a special guard comprised of Stoker R. Bond R.N., Petty Officer A. C.Percy R.N., Company Quartermaster Sergeant G. Attride, Rifle Brigade, and Sergeant H. Balm R.A.F. There followed a service and hymn singing opened by the Band of the 2nd Life Guards. the Eton College Provost, Dr. James, gave a long address and the Vicar read out the names of 33 who had given their lives and whose names were on the Memorial.

Driving rain and a strong wind did little to detract from the occasion. During the address the Provost of Eton said:

The memory of all mankind short: pass by 80 years from now - one human lifetime - and every man who fought in the Great War will have rejoined their comrades whom lie and we honour today Pass yet one other lifetime and how many living who ever set eyes on one who fought. That may be so and will be so, but what does it matter. Nothing can make undone the brave deeds that were done, nothing can wipe out the sacrifice that were offered by these men. This stone shall be a memorial to our generations outlasting, we hope many successions of human lives. Yet in is itself subject to accident, violence and decay. Again, I say what does it matter if human memory is brief and human records, even graven in stone are perishable, there is a memory that is eternal. There is one who says, “Yet they may forget, yet will I not forget”.

This is an extract from Their Names Shall Be Carved in Stone
and published here with grateful thanks to the author Frank Bond.
Posted by Steve Denham at 16:00