The United Kingdom Census of 1911 was taken on 3rd April, that year and was the eighth of the UK censuses to include details of household members. The total number of persons returned as living in England and Wales at midnight on Sunday, April 2nd, 1911, was 36,075,269. This shows an increase of 3,547,426 upon the number enumerated on March 31st, 1901, and gives a decennial rate of increase of 10.9 percent. It is the first census that has the returns for each household as completed by the head of the house are available

Age and sex of each person: The actual age in years or months for babies under one year are recorded in the 1911 census.

Particulars as to Marriage: married, single (persons 15 years and upwards) or widowed; years married, the number of children, living and who had died. 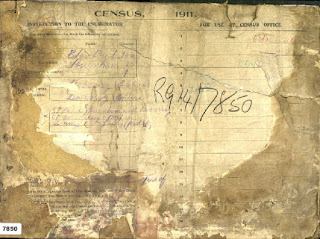 The Superintend Registrar's District was Eton, Bucks and the Registrar's district was Burnham. Enumeration District No. 1. The enumerator was not recorded on the cover of the Census records.

The area for the 1911 census included was the entire parishes of Dorney and Boveney.

The 1911 Census reveals that there were 125 households, one house was unoccupied and 503 people in residence in the parish of Boveney at midnight on the 2nd April. In Lower Boveney (Boveney New Town) there were 94 households and 389 people recorded. The oldest person, Ann Grimes at the age of 91, she was born in 1820. There were two residents in their 80’s. Arthur Lea was youngest at one-month-old, he was the third child of Thomas and Martha. There had been two children born in the first three months of 1911.

Click on this link to see our transcription of the 1911 census records for Boveney.. We will be looking deeper into what the census reveals about the growing village and publish our findings in future articles.
Posted by Steve Denham at 10:08 No comments:

The Eton Wick and Boveney WI was started in the 1930's by Edward L. Vaughan and his wife. Mr Vaughan was an Eton College master who lived in the village. The village WI ran for 72 years until Christmas 2006, here are some photographs from the final meeting.

Mrs Joan Ballhatchet, a long time member of the village WI told Windsor and Eton Express "We were determined to keep going until 2006 so we could have our Christmas party and go out with a bang. We brought out all our trophies that the branch had won over the years and former members came back especially." 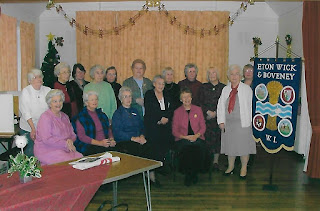 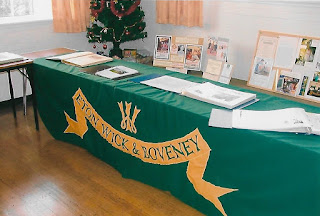 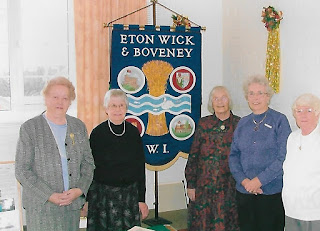 One of the scrapbooks on display was Our Community Today & Tomorrow that was produced and entered into the Berkshire Federation of the Women's Institue Golden Jubilee Cup Competiton in 1992. The Eton Wick and Boveney WI entry came 1st. To read the full report click here or copy the URL and paste it into your web browser: https://drive.google.com/open?id=1mn7PXZieX69ypFxkUNJqQ0-hXS1GHNPJ 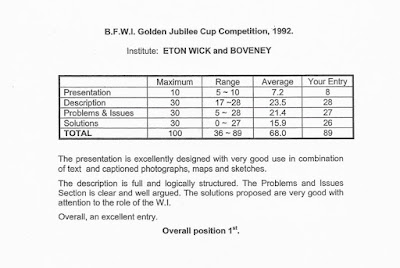 Posted by Steve Denham at 11:34 No comments:

On April 30th 1997 the History Group meeting covered how Eton Wick celebrated Queen Victoria's Diamond Jubilee in 1897. The talk was researched and given by John Denham.

June 21st, 1997 was the centenary of Queen Victoria's Diamond Jubilee.

Celebrations for both Jubilees, Golden and Diamond, had similar programs in Eton and Windsor.

Although Eton Wick became a parish with about 800 inhabitants within the Eton Rural District in 1894, for the Jubilee celebrations the village joined Eton, who in turn joined with Windsor in the organisation for both occasions.

The ten years between the Golden and Diamond Jubilees saw an increase in the number of village traders.

From Kelly's trade directory for 1887 only eleven premises are listed as commercial. (Farms, Beerhouses, a laundry, Three Horseshoe P.H) the two shops for provisions etc. were Arthur Bennett and Thomas Lovell, baker and Post Office.

For 1897, 24 premises are listed as commercial, Eton Wick now had shopkeepers, Charles Ayres, Alma Road, Edward Wilkins, butcher, Thomas Lovell, baker and grocer, Dairymen, a florist, market gardener, boot and shoe maker, draper and boot retailer, cabinet maker, plumber, carpenter and smith, and builders, but in 1897 the village relied on Eton for many domestic requirements. The increasing wealth was altering the way life was pursued by many parishioners. This brought forth the comment from the Reverend Donalson speaking at a Deanery conference at Slough on the subject of Sunday Observance that the neglect of this began with the leisured classes who robbed their servants of the privilege of Sunday worship by dinner parties, concerts and other amusements and was influencing all classes generally.

For the Diamond Jubilee celebrations public meetings were held in January 1897 at Eton and Eton Wick to consider ideas and arrangements for the sixieth anniversary. But other events of local interest were also being discussed by the Parish.

The new year commenced with the children's Christmas party given by Mr Vaughan and others for the 235 children attending the day schools in the parish., which brought the remark from the vicar that, when compared, the number attending Sunday school was miserably poor.

Temperance and thrift both got their due mention in the parish records. A decision by the local school governors in 1897 to encourage thrift introduced a savings bank for children of the parish Church of England schools. The collected monies were deposited with the Post Office savings bank.

Mr Denham's script can be read here.
Posted by Steve Denham at 10:41 No comments: