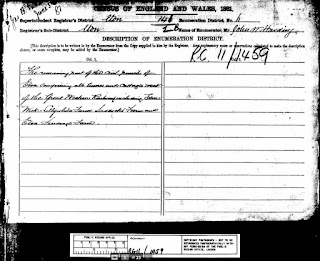 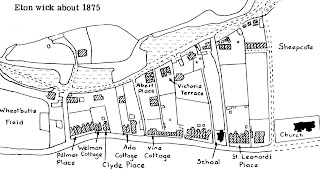 Posted by Steve Denham at 18:28 No comments: 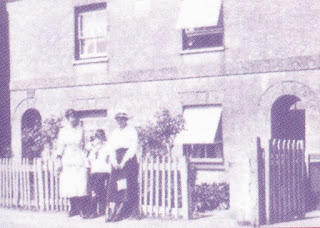 Charlie's youth was spent as an Eton Wick boy in a family of three brothers and two sisters. He was born on June 14th, 1894 as the oldest son, but second child of Mr & Mrs Edward Hammerton.

He attended the village infants school until at the age of seven he went to Eton Porny School. At that time the family was living in The Cottage, Boveney Newtown. There was at least one other move to Rosedale, Eton Wick Road, before they finally settled in No. 2 Clyde Place in the same road. He was a regular school attending youngster and was held in high regard. Charlie passed the exam to become a "Porny Scholar" and left the school on July 28th 1908 at the age of 14 years to work at No. 17, Eton High Street for the printing and bookshop of Spottiswood & Ballantyne Ltd. By 1914 he was a trained librarian. 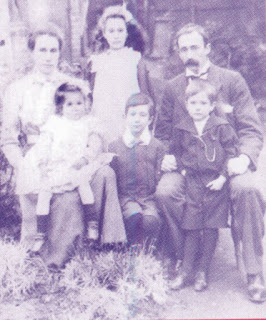 St. George's Day 1915 saw the Brigade in action in the battle of Second Ypres after only a few days' respite following a devastating ordeal on Hill 60. A report of this action states:

The troops although weary from the march went straight into action. It was a wonderful effort, but one without any hope of success. In the face of heavy enemy fire the Brigade gained to within a varying distance of 30 to 200 yards front its positions with courage and discipline of the grandest order but could not get farther. 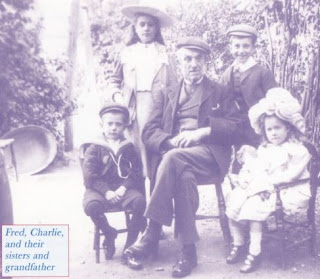 When the battle of the Somme opened on July 1st 1916, the Queen Victoria Rifles, as part of the 56th Division, was one of the two Territorial Divisions on the extreme left of the line with the diversionary task of attacking Gommecourt. Although reasonably successful the day was not a good for all the British army units. Casualties along the 20 mile front were very heavy and barely any advance into enemy held positions had been achieved. Throughout the summer of 1916 the Somme battle raged, until on October 8th the Battalion was loaned to 168th Brigade to help them dislodge the enemy from his strongly entrenched positions on the Transloy Ridge, preventing the British advance toward Bapaume.

Gunpits on both flanks of the enemy trenches had taken a steady toll of the 168th troops on the 7th October, and in particular of the London Scottish. On the 8th the London Rifles and the Queen Victoria Rifles were sent up in support. An assault was made at 3.30 p.m. but again with no appreciable success. At 10.30 p.m. all the troops were withdrawn. On October 9th they were on the brink of success but artillery support was inadequate, due to absence of aerial pinpointing of opposing guns and the destruction of useful landmarks. As the weather deteriorated with the onset of winter the much hoped for breakthrough never materialised.

It was on October 9th that Charlie was killed, either just before, or during the attempt to drive the German defenders off the Transloy Ridge. That night the 56th Division was relieved.

He has no known grave and his name is engraved on the magnificent Thiepval Memorial, five miles north east of the Somme town of Albert. The memorial records 73,412 names of the missing who fell in this sector of France during 1916 and 1917.

We wish to offer our sincere sympathy to Mr & Mrs Hammerton in their bereavement. Charles Hammerton bore the highest character from boyhood, and by his devotion to his church and her services, even when on short leave, showed that he continued in the army as he was in the home. We have no details of his death at present but we are sure he proved himself a true comrade and a gallant soldier. 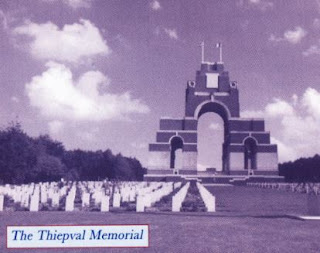 Two years later Mrs Hammerton had more welcome news when she was told her younger son Fred had been awarded the Military Medal for carrying messages under heavy machine gun fire. He survived the war.

Charlie was single and 22 years old at the time of his death. He is commemorated on the Eton Wick Memorial, on the Eton Church tablets and on the family grave in Eton Wick Churchyard.

Charles Hammerton is recorded on the Buckinghamshire Remembers website

Email ThisBlogThis!Share to TwitterShare to FacebookShare to Pinterest
Labels: 1910's, Eton, Remembering the fallen, School, Their names shall be carved in stone, War Memorial, WW1

Eton Wick is described as the part of the civil parish of Eton comprising all the houses and cottages west of the Great Western Railway including Eton Wick, Lillywhites Farm, Saddocks Farm and Eton Sewerage Farm. The whole in the parliamentary division of South Bucks.

It should be noted that Eton Wick in 1891 only included the houses on the northern side of the Eton Wick Road as far west as Bell Farm.  The map of around 1875 gives an indication of the extent of the village.

The 1891 Census reveals that there were 102 households and 456 people resident in the village on the 5th April. The oldest person, William Woolhouse was 86 and was born in 1805. There were three residents in their 80’s. The youngest at less than one month was George Greenfield. There were 4 babies born in the first three months of 1891.

We will be looking deeper into what the census reveals about Eton Wick and publish our findings in future articles. This is the first step on our Census Project that will over time cover all the records from 1841 onwards.

Click on this link to view the 1891 census transcription for Eton Wick. Or copy and paste this URL into your internet browser search bar.

The map of Eton Wick was first published in The Story of a Village: Eton Wick 1217 to 1977 by Judith Hunter.
Posted by Steve Denham at 10:37 No comments: