The Caesar family are not mentioned in early records of Eton Wick and it is believed they came to live in the village a few years before the Great War. Albert is recorded as being born in St. Pancras, London. Albert was a reservist, having served as a Sergeant with the peacetime Grenadier Guards. Undoubtedly as the result of service at Windsor he decided to make a home in Eton Wick. In fact he was one of four of the village fatalities who served with Guard Battalions and settled in Boveney New Town. The Caesar home was number 4, Shakespere Place, Alma Road. We first hear of the family in the Parish Magazine of February 1914, when a child was christened Edith May Caesar in St. John the Baptist Church, Eton Wick. Three months later, from the local newspaper, we read of:

John Cecil Caesar, aged 51/2 years, being drowned in the river at the bathing place known as “Athens”.

Rather surprisingly the lad was a pupil at Eton Porny School, and was walking home along the river bank with another five year old and decided to paddle at "Athens". Young Caesar's socks fell in the water and while trying to reach for them he toppled into the river.

Almost all village boys would not have gone to "Porny" until they were seven years old, and of course it was well over 1½ miles from Eton to John's home, via the river path. His father, Albert, gave evidence of identification at the inquest held in the Three Horse Shoes public house.

Mrs Caesar's tragedies were not yet over though. John was drowned on May 18th 1914 and in less than four months Albert, her husband, was to become Eton Wick's first fatal casualty of the war. A third time tragedy struck with the death of baby Edith May who was buried in the village churchyard on April 14th 1915.

As with all reservists, Albert would have reported for duty immediately war was declared. Eleven days later, August 15th 1914, the 2nd Grenadier Guards arrived in Havre. By August 22nd 100,000 men had been shipped to the continent, and although this represented most of the troops available it compared poorly with our French ally's army of four million troops, or with Germany's 4½ million. The British forces were formed into I and II Corps. With long marches they pushed quickly north into Belgium, in an attempt to stem the German advance south through that country. 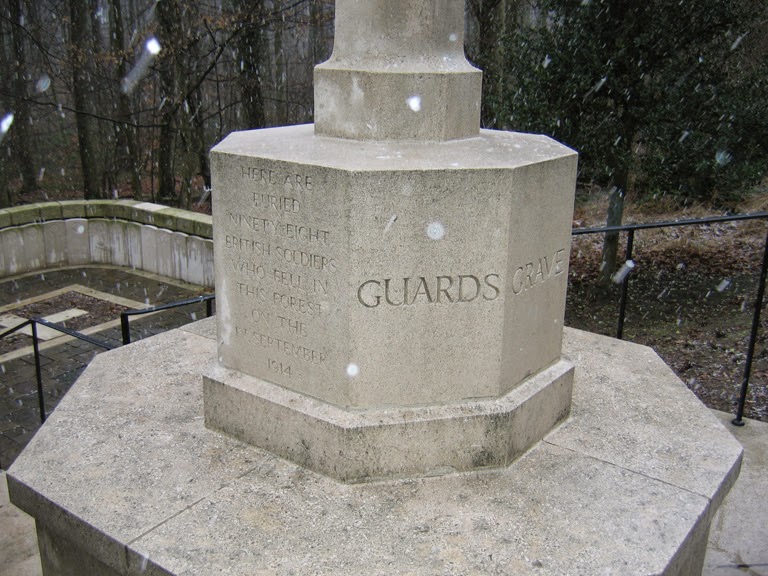 On August 23rd the opposing forces met near Mons. Mounting pressure against French forces on the through the forest of Villers Cotterets, while the 2nd Grenadiers and the 3rd Coldstreams took up defensive delaying positions in order to cover the 2nd Division's retirement behind them.
British right flank forced them to retreat, leaving the British lines exposed to enemy fire. To avoid this a general withdrawal, which soon became a hasty retreat, followed. For the next few days a march of 20 to 25 miles, under heavy packs and sweltering skies, became the order of the day. As the weary troops fell back toward Paris they discarded much of their equipment by the roadside. On September 1st the Guards Brigade withdrew

At mid-morning, the 2nd Grenadiers sent a company of men forward to support the Irish Guards, but the rapid advance of the enemy negated any chance of success. By this time the three British Battalions in the forest had become hopelessly intermixed, causing many self-casualties. It was here, while trying to delay the German advance, that Albert Caesar was killed. The C.W.G.C. record his death on September 4th, despite the fighting being on the 1st. He could have died of wounds sustained on the 1st, or perhaps his remains were not recovered until the later date.

The German's drive for a quick victory was halted on September 5th on the river Marne, and determined allied counter attacks caused the enemy to strategically withdraw to entrenched positions on higher ground. The British losses in the first five weeks of war were 15,000 and the French casualties an estimated 250,000.

Albert's death was reported in The Windsor & Eton Express:

He had previously been reported as "missing". In December 1914, the newspaper stated : 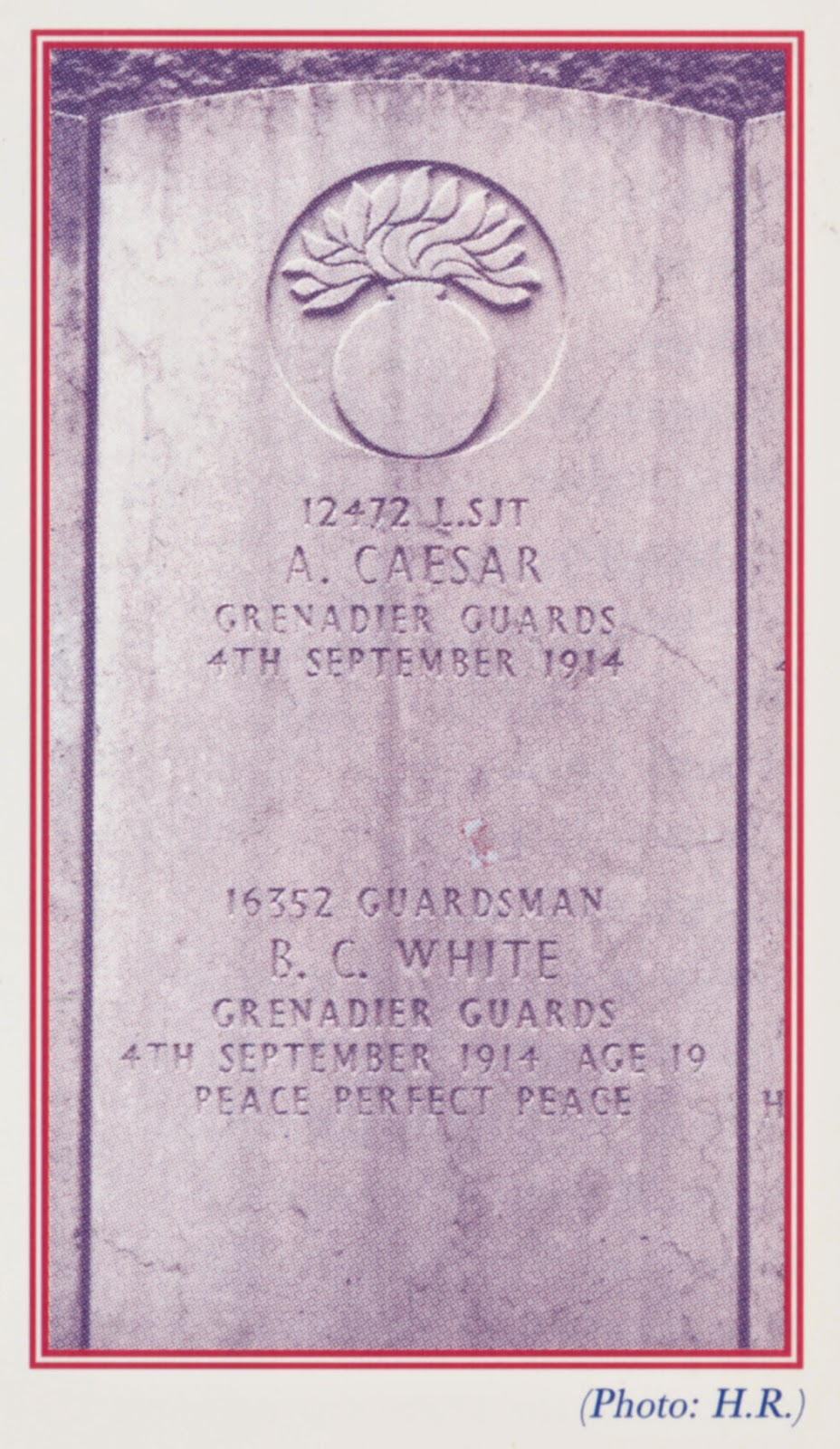 It has been officially reported that Albert John Caesar has been killed in action. He was greatly respected by all who knew him. He leaves a widow and three children to whom we offer our deep sympathy in their great loss.

Albert's age has not been established but was probably 30 to 35 years. His widow married again and became Mrs E. Pocock living at 9 The Laurels, Myall Street, Oatley, New South Wales. Albert is buried in Guards Cemetery, in the Villers Cotterets Forest, 2½ miles north of the village of that name.

The small cemetery contains 98 graves of Grenadiers, Life Guards, Coldstream and Irish Guards, all killed between September 1st and 19th, 1914. Albert is also commemorated on the Eton Wick Memorial and the Eton Church Gates.

Further information about Albert Caesar can be found here. 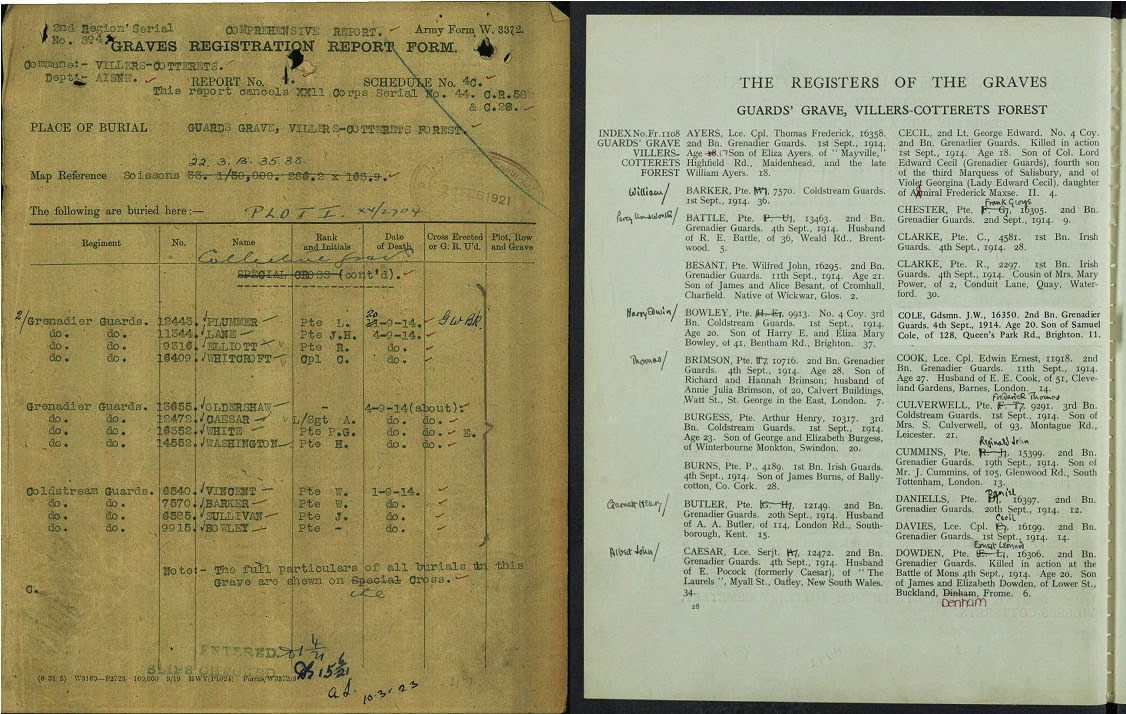 This is an extract from Their Names Shall Be Carved in Stone
and published here with grateful thanks to the author Frank Bond.
Posted by Steve Denham at 08:26