War Memorial Committee Meetings Held in April and May 1920

Proposed Mr Vaughan, seconded Mr Barrett that peter Knight's name be added to the Memorial, he having enlisted from Boveney. It was decided that Harry Quarterman was not eligible for inclusion as he lived in Hanwell before the war.

The committee thought that the "Rise in Labour" excess was not due, as no mention was made at the time of contract. It was decided to pay the £173/18/- on account and to pay Mr Nutt, the architect, £10 on account of his amended £20 fee. AS this practically absorbed the funds, it was decided to call a Public Meeting on May 19th to consider further fund raising.

The Rev. McAnally explained to the meeting the financial situation. The Committee thought Sargeant’s had no claim for the labour surcharge, but morally it should be paid, if not legally. Mrs Nottage suggested every household be invited to pay 6 pence. and this would probably raise £15. Mr Howell asked if money from whist drives would be alright. The following were collected in the meeting.

Agreed to hold a house to house collection for sale items to be held on June 23rd. Ladies to make all arrangements.

This is an extract from Their Names Shall Be Carved in Stone
and published here with grateful thanks to the author Frank Bond.
Posted by Steve Denham at 06:00 No comments: 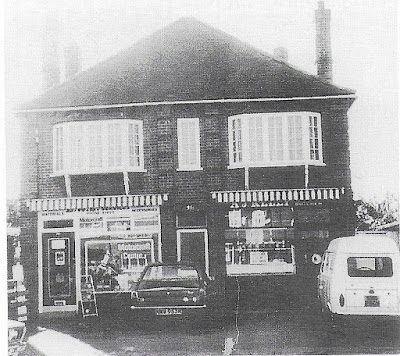 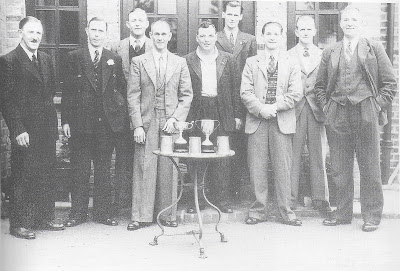 This article was first published in A Pictorial History of Eton Wick & Eton.
Posted by Steve Denham at 06:00 No comments:

Passing through Weston's Yard and the Playing Fields, once called King's -Ward or the King's Worth, we cross Sheep's Bridge, and, looking to the river bank on the right, we are reminded that, from 1557 until the year 1840, a timber and coal wharf occupied this bank, known as Leadbeater's Wharf. This was also used as a bathing place but was finally condemned as dangerous. Taking the path to the left, we pass on the right the Shooting Fields, now known as Upper Club. Crossing Slough road from the Lodge we find ourselves in Stone Bridge Mead. Formerly this was divided into three holdings. The land along Chalvey Brook belonged to the Parsonage of Eton.; It still is free of tithe and bears the name of Parson's Bush. Next came a narrow strip of arable land, one furlong in length and eleven yards wide at each end--in all, half an acre, known as Mid-furlong, which was the property of the Bridge Trust; nearer Colenorton Brook is Pocock's Field, once the holding of Henry Jordley. Crossing the footbridge to the left we pass through Timberhaws (the Timbralls), better known in these days as Sixpenny or the Field.

Coming out into Common Lane by the Fives Courts, we pass Colenorton Close on the right and find ourselves at the entrance of Long Common. Taking the path over Colenorton Brook by the side of the pumping station, we pass under the railway viaduct and are in Rossey's Piece. The long field north of Colenorton on our left is Inner Mead; on the other side towards Chalvey lie the Broad-masses or Broadmarshes or Broadmoors, famous for cowslips. Further on, on the same side, is North Field with three little strips in the corner, Little Bush Close, Bushy Close, and Long Close.

The path continues straight, until it is crossed by the road leading to Little Common. The farm on the left is Manor Farm; the farm to the right is known as Saddock's Farm, which is the property of the Crown. Behind the cottages on Little Common is what is called Great Park Close, now part of the Eton Sewage Farm, and nearer Bell Farm (occupied by the Manager) is the Hyde or Great Hide. At Bell Farm we reach the western boundary of the parish. Although Long Common is the pleasanter way, we will for the sake of the topography return by the Eton Wick road. Opposite the front of the village is Upper Tilston Shot, It is here a futile attempt was made in 1846 by T. Hughes to defy Lammas rights. Here in the present century E. L. Vaughan has succeeded in planting an Institute for Eton Wick and New Boveney.

Eton Wick Church and Schools stand on Sheepcote or Great Sheep Croft or Sheep-gate, the land on the other side being Crab Tree Close. A little further on we reach on the left Gudgeon's Pool, the land opposite being called Sandles or Sandalls. On the Eton side of the Sanatorium, to the left as we face the town, is Broken Furlong, and on the right crossed by a path, Path Sandles. Then we reach the Slads or the Water Slades, i.e. the channel by which the floods slide away,' and we come to the College Recreation Ground properly called Great Town Piece,' and Evans' Field, ' Little Town Piece,' where once there stood a pest-house for cases of plague.

We may leave the College by Keate's Lane passing the houses built on Cock Close on the right and Christopher Close on the left, and we come to South Meadow. The narrow field behind the Bellevue Cottages is marked in the maps as the Butts, 'and a small plot of ground opposite on the left in South Meadow is known as the Hayward's Butts,' The Hayward, who has charge of the cattle on the Lammas and Common, still has certain privileges on this strip of ground.

Instead of following the lane, we will take the path to the right through the town Recreation Ground, which occupies part of Ten Acres,' The path leads through 'Rush-pits' to Grass and Corn Gabbetts, and so to the bridge on the towing path over Boveney ditch. We have again reached the boundary, and turn back to Athens, which stands in Warwick Eyot with Warwick Close and plots called Bird and Buckshot Close and Burden Bushes behind it.

If we crossed Long Bray Bridge at Upper Hope we should pass from the Lower Ward Meadow into Great and Little Inner Ward, but we will skirt the Outer Ward and Cuckoo Weir, called in some maps Cuckoo Pum or Cuckoo Penn Ware. We pass on the left 'Mill Piece' and 'Mill Furlong,' reminding us of the mill which stood in Cuckoo Weir at the time of the Norman Conquest. On the right is a broken piece of ground called Gravel Close, which still shows signs of old gravel pits, and we can return either by the side of South Meadow, by the side of which flows a water culvert, or cross the Brocas field and re-enter the town by Hog Close and Brocas Lane. We shall then in two walks have touched on nearly all the places which are mentioned in the maps or other records of old Eton.

This is an extract from Old Days of Eton Parish by The Rev. John Shephard originally published by Spottiswoode and Co., Ltd. in 1908.
Posted by Steve Denham at 06:00 No comments:

Royal Navy, RAF and an Army Expeditionary Force were sent to help the Norwegians only to be evacuated at the end of April with heavy losses. Increasing air activity by the German Luftwaffe over southern England. prompted the Bucks A.R.P. service to make arrangements for a better equipped wardens post in the village.  Application was made to use the uninhabited No.1 Bell Cottage, the ARP undertaking the re-enforcement of the building together with the removal of the protection and all equipment after the war.

No 2 Bell Cottage had already been lent to the Waste Utilization Committee as a wastepaper and the scrap metal dump. Paper, cardboard, household aluminum and scrap iron, all had salvage value to the war effort.  With the help of the Scouts and Cubs, Guides and Brownies, the Schools, Women’s Institute and others the village collection of salvage, managed by Councilor Mr. A. Chew, became a profitable operation. To make the collection more efficient a local farmer lent a horse and cart. If it was not screwed down on to the cart it went such was the enthusiasm of the collectors.

A government order of 1941 allowed for the requisition of iron gates and railings from public and private property. Palmers Place, Hardings Cottages along with other village properties lost their garden wall decorative rails.

Blackout problems at the Village Hall

With no blackout arrangements available and used by the L.C.C. School during the day the village hall was not available for recreational purposes. Obtaining material from Bruce and Lumb of Slough the village hall working party made the requisite curtains, but these when finished were inadequate for the purpose due to the poor quality of the material, therefore no dances or other evening activities took place during the winter months. This curtailment on the use of the hall, also the decline in club registers as members volunteered or were conscripted to the forces or other war work reduced the hall finances. The flower show committee had every confidence and they continued making arrangements for the 58th Horticultural Show on August Bank holiday held at the Wheatbutts. The possibility of air activity over the area was to be no deterrent to Major Dabson, committee chairman with committee members Mr Kemp and Mr Laverty,

Where censorship allowed the Windsor and Eton Express reported all aspects of local happenings, some serious others humorous. This incident between the village policeman and local farmer has both ingredients.

Following a report of straying horses and the non-burial of dead animals, P.C Raynor visited Manor Farm, Eton Wick, then tenanted by Farmer Urquart. Farmer and policeman did not meet on friendly terms and the outcome was not peaceful, Farmer Urquart when approached took an aggressive attitude with P.C. Raynor. With much argument the meeting ended abruptly with P.C. Raynor suffering the indignity of having a bucket of milk poured over him. For his outburst the farmer was prosecuted and fined £4-10s.

Please note that with effect from

will be closed until further notice.

We of course apologise for any inconvenience to our hirers, but this is in accordance with Government Guidelines. 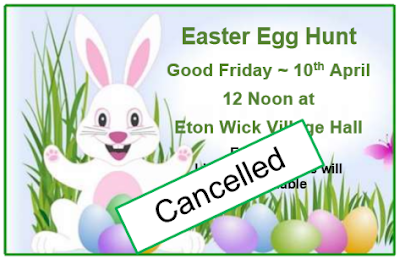 Easter Egg Hunt on Good Friday - We were hoping to make this an outside event only this year. Due to the Coronavirus this has now been cancelled.

Unfortunately many other events listed in this newsletter have been cancelled or postponed, with particular reference to the V.E. Day Anniversary Celebrations shown on page 14 of Our Village April 2020.