At 35 years of age Harry was one of Eton Wick's oldest fatal casualties of the Great War. He was born November 17th 1883 and baptised the following January. Brother Fred was born in July 1885 and it was about this time that Edmond and Louisa Quarterman took their young family from King Stable Street in Eton and moved to number 3 Oak Villas, Boveney Newtown. Two more sons were born in 1886 and 1887 and were named Alfred and Lewis. An older boy, John, apparently joined the regular army and at the outbreak of war was serving in Hong Kong, where his two sons were attending school.


Hostilities brought them all back to England and when the two lads John and William, aged 12 and 13 years, registered for the Eton Porny School on January 18th 1915, they had the unusual entry in the register as "Previous School, Hong Kong". By this time the family home was at Long Close, The Little Common, Eton Wick and John's young family went to live there with his parents and their family. At Long Close the family were pig farmers. Years later it was recorded that Tom Quarterman was living there with his mother and two sons. Perhaps Tom and John were one and the same. Certainly Harry had four brothers and one sister, Kate. He attended Eton Porny School from October 26th 1891 and left that school one month before his 13th birthday, in October 1896. Perhaps he also became a regular peacetime soldier, but the facts have not been established. The Parish Magazine did however report him as serving in the army before September 1914.


In August 1914 the 1st Battalion Royal Berkshires was at Aldershot, attached to the 6th Brigade, 2nd Division. On August 13th they arrived in France and 10 days later saw their first action. Considerable fighting took place then, and again during the long retreat from Mons. Initially Battalion casualties were not heavy but during October and November 1914, they suffered substantial losses while fighting in the First Battle of Ypres. At this time it became necessary to commission senior N.C.O.s. in the field. During the 1915 spring fighting they lost a further 423 officers and men. In September they were engaged in the Battle of Loos, and although they succeeded in taking their designated objectives, the overwhelming enemy forces drove them back again.


In 1916 the Battle of the Somme was launched, but not until the offensive was three weeks old were the 1st Berkshires involved. They arrived near Delville Wood on July 24th and three days later were fighting against a determined enemy in the woods. They suffered a further 252 casualties. Subsequent actions were at Bernafay Wood; Mansell Copse; Serre; Mailly Maillet and Bertrancourt. The Battalion diary states:


"there were hardly enough [troops] to cope with the enemy when eventually his front line was reached."


The following year, in November, they were heavily engaged at Bourlon, and it was here that a company of men decided on "No Surrender" and died fighting. It was probably about this time that Harry was transferred to the 2nd Berkshires, 25th Brigade, 8th Division. American troops were beginning to arrive in Europe in the spring of 1918 and in an attempt to preempt their obvious influence on the war the Germans launched a massive 40-mile front attack, supported by 6,000 artillery guns, on March 21st of that year. Allied armies were forced to withdraw in the face of the onslaught. At midday on May 27th gas shells rained down on the four French and three British Divisions defending between the Ailette and Aisne rivers. The defenders were very tired as they faced 18 German Divisions. At 3.40 a.m. the following morning, German storm troops attacked and reached the Aisne across a carpet of annihilated allied soldiers. The 8th Division, which included the Berkshires, was one of the three British Divisions involved. It was here on May 27/28th that Harry was taken prisoner, but not until two months later was the first news of him available.


On the anniversary, one year later the paper printed:


"Memoriam" Quarterman -Harry, Private. In memory of our dear son and brother in the Royal Berkshire Regiment, reported as missing on May 27th 1918 and is now officially reported as "Died of Dysentery" on October 30th 1918, whilst a P.O.W. at Asfold in Germany, after 4 years of active service.


We pictured his safe returning,
We longed to clasp his hand,
But Our God postponed the meeting
Until we meet in the better land.

Harry was married to Julia. He was 35 years old and is buried in the Sedan (St Charles) Communal Cemetery, French Military Extension - Grave No. 621. The cemetery is situated 11 miles south east of Charleville. All 50 British burials are of P.O.Ws. who died between April 9th and October 30th 1918, In Eton Wick, the War Memorial Committee deliberated on the eligibility of Harry Quarterman to be on the village memorial, because he had lived in Hanwell before the War.


At the time of the memorial unveiling in March 1920 a decision had been taken to include Harry's name, and it appeared on the "Form of Service". Because of the late decision however, his name was inscribed at the foot of a panel on the memorial and not in its alphabetic order. His name was not included on the Eton Church Memorial Gates: the only Eton Wick omission. Harry's brothers lived in Eton Wick and Eton for the rest of their lives, and today relatives are still living in the village.


This is an extract from Their Names Shall Be Carved in Stone
and published here with grateful thanks to the author Frank Bond.
Harry Quarterman: The Commonwealth War Graves Commission page.

Harry Quarterman:  The Lives of the First World War page. 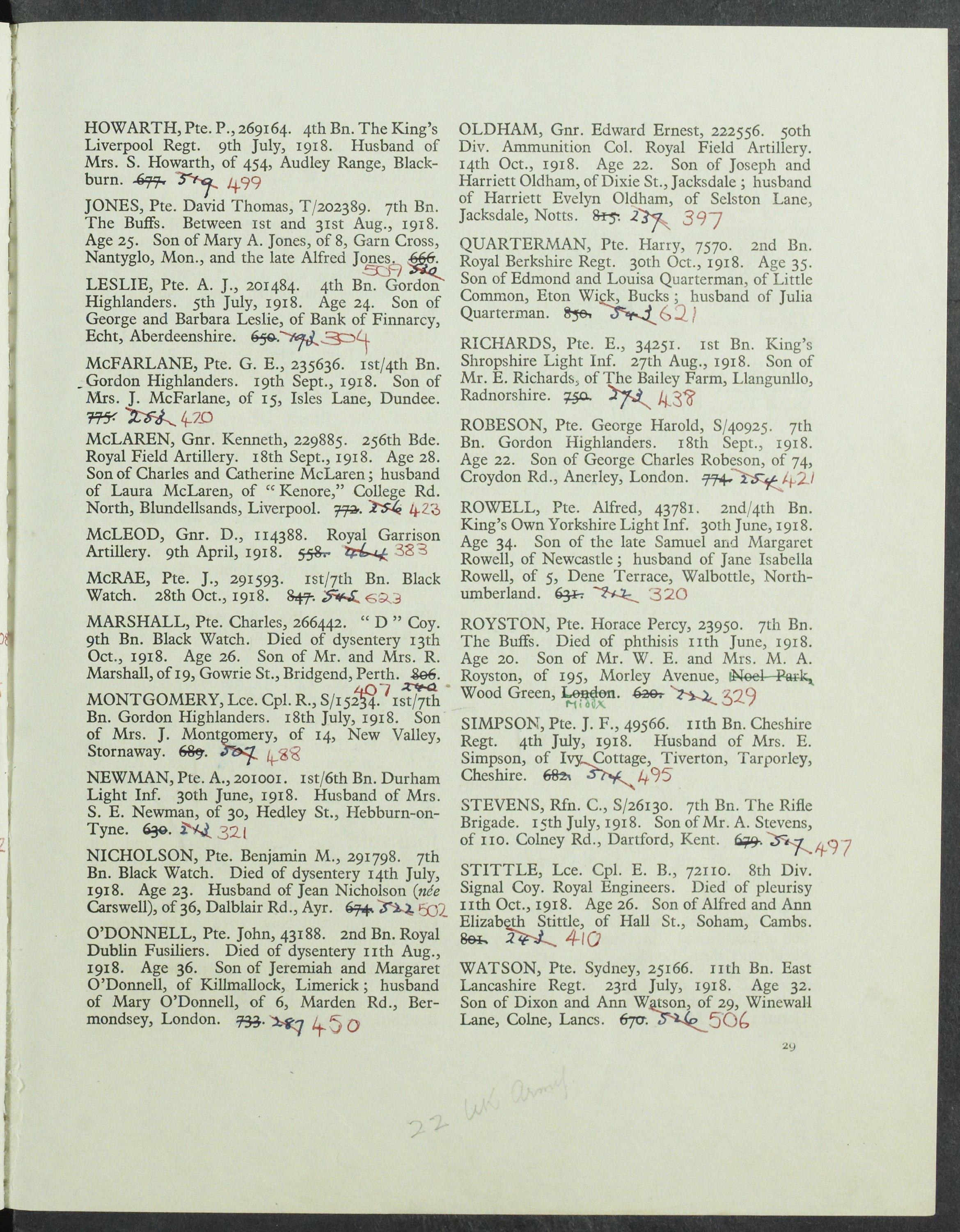 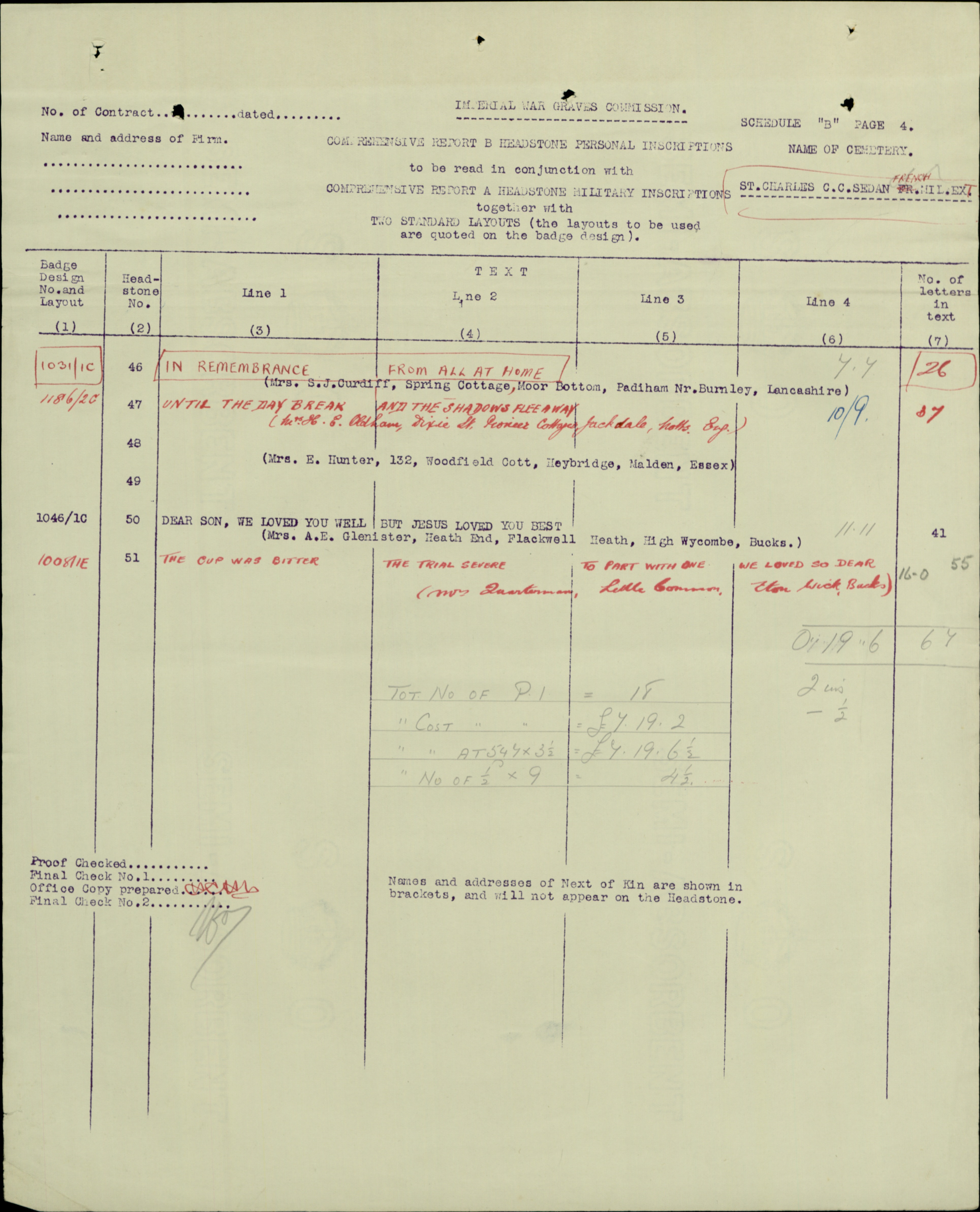 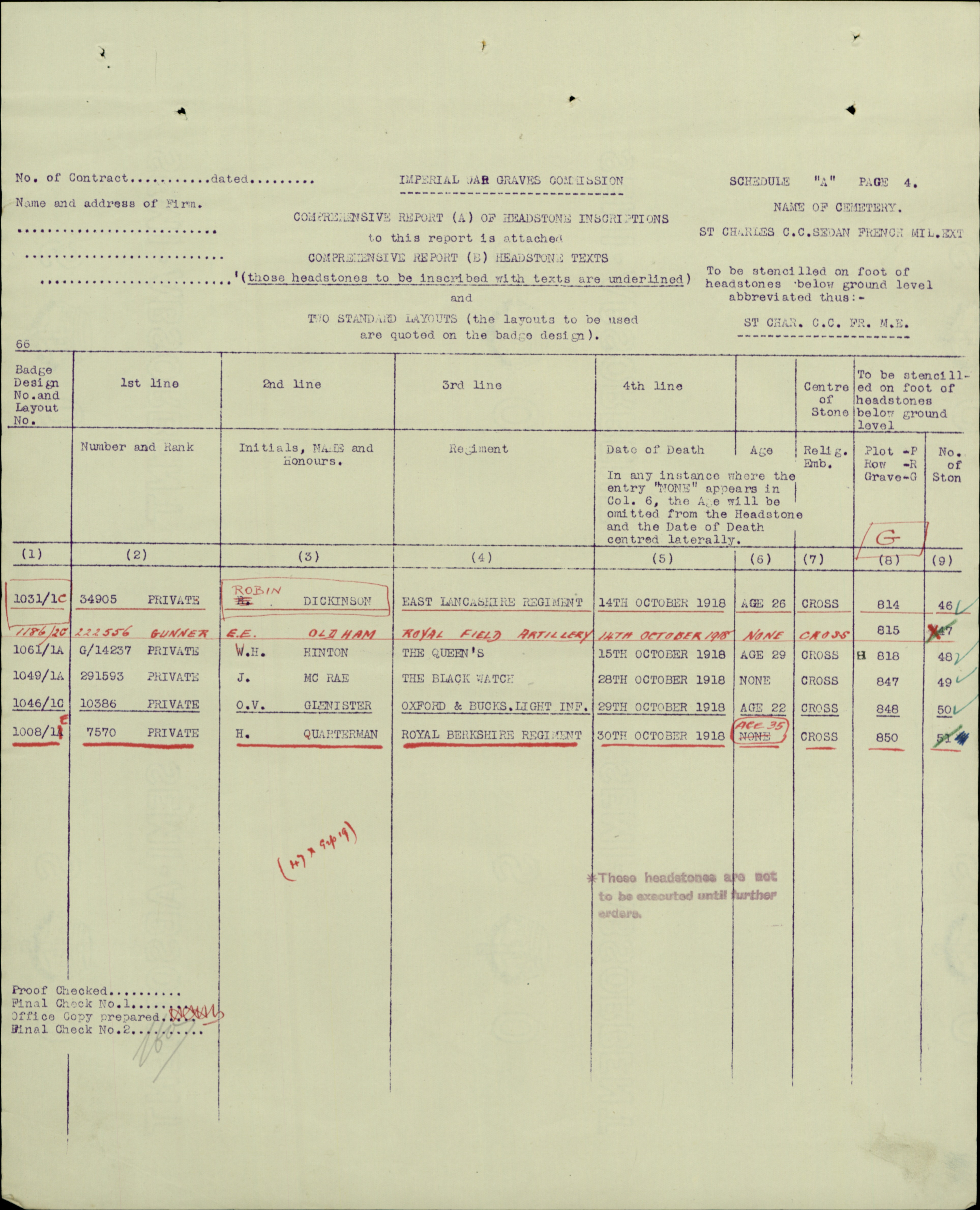 Email ThisBlogThis!Share to TwitterShare to FacebookShare to Pinterest
Labels: POW, Remembering the fallen, Their names shall be carved in stone, War Memorial, WW1