Christina Plumbridge, who had been Head Teacher at the Eton Wick School since 1935 relinquished the post and Ida M. Rooke became the new Head.

This article is somewhat limited in its scope, but while preparing the repairs have been made to an article added in 2015 that had lost its images.

If you know any more about the pictures on this page, please let us know. Or you might have some other class photographs from Eton Wick School which we could add?

The First World War took men from Eton Wick as it did from every other village and town in the country, and amongst the first four men from the Maidenhead Circuit who lost their lives was George Boulton of Eton Wick. His name was sent with others to be remembered at the Conference Memorial Service in March 1916. No doubt members of the chapel took part in the war effort, but such things do not figure in the minutes. In 1917, however, society stewards were asked to supply the names of all who had volunteered for active service so that these could be placed on a roll of honour to be hung in the vestibule of each chapel. In June 1919 the minister wrote to the men who returned welcoming them into the fellowship of the church.

Temperance was still a live issue in the Primitive Methodist Church and special temperance services were regular events. In December 1919 it was resolved that once again the circuit would do all it could to further the temperance cause. In the years 1921 and 1922 there was a national Primitive Methodist Campaign, part of a much larger national effort involving other churches and organisations and the Government. One of the important issues was the sale of alcohol to young people and from the successful Act of 1923, spearheaded by Lady Astor of Cliveden, stems our present licencing law which makes it illegal to sell alcoholic drinks to people under the age of 18.

This is one of the earliest references to Mrs Chew in the surviving records of the circuit and chapel. She was born in 1886, the same year as the chapel was built, and from the age of two she lived with her aunt, Annie Tough, at Bell Farm. She left Eton Wick in 1910 soon after her marriage to Archibald Chew, but returned in the early 1920s, and both she and her husband soon began to take an active part in chapel affairs. She was a Sunday School teacher, one of several in the 1920s, for the Sunday School had grown so large that it had spread into the chapel, with the various classes for boys and girls being held in the different corners. Mrs Lane's was by the organ. Morning and afternoon Sunday School, anniversary services, examinations and the Christmas party were all part of the Sunday School calendar, but perhaps the highlight of the year was the outing to Burnham Beeches. Mr Dear's horse-drawn coal cart was scrubbed clean and forms from the chapel made seats for the youngest children. The older ones walked, helped on the way no doubt by the sweets given by Mrs Tough and the singing:

In this jet age the Beeches seem nothing very special, but then they 'seemed so far away' and the day with its picnic and races, and a chance to explore the woods a magical time. Ferns and wild flowers were gathered and the cart decorated for the homeward journey.

Although the names of the children who attended Sunday School at this period are not known, the class book for 1927 to 1933, survives. There are 18 names on the first page, all but one of them women. The chapel had its own choir with Mr Barnes a very able choir-master. Socials, concerts and many other money raising events still took place and in the words of one elderly member 'it seems we had something going every week.' For many people the chapel was their social centre.

The chapel was now some forty years old and inevitably there had been many losses of valued members over the years through change of residence or death. In 1924 Frank Paintin died, his loss to the circuit and chapel is recorded in the pastoral letter of the Rev Daniel Dunn in the circuit plan for the winter months of that year. Emma Lane, John Lane's widow, died in 1926; she had been a devoted worker for nigh on fifty years and assistant society steward since the death of her husband some thirteen years before. Kate Bryant, much remembered as a Sunday School teacher, died in 1928 and for many years after this the chapel benefitted by the gas lamps on the pulpit, given in her memory.

Charles Tough was neither a member of the chapel or even an occasional worshipper there but in 1925 his loss was keenly felt in the chapel and circuit. The Rev Daniel Dunn wrote of him, 'He made little outward profession of religion, but he inspired a rare respect and affection in hundreds of people  he welcomed our Ministers and Local Preachers to the hospitality of his home.

What will it feel like to go to Eton Wick to many of us, and not go to Bell Farm and share a homely and happy meal and chat with him, and a prayer before leaving the home'. His funeral was conducted by two men he knew for many years, the Rev Frank Tarrant, by now a Congregational Minister in Windsor, and the Rev William Folley, then a Primitive Methodist Minister in London.

Letters of sympathy were sent by the minister whenever the death of a member of one of the chapels, or their families, occasioned the need, but only once in the forty years for which the circuit minutes survive was a special resolution passed to record such a loss. This rare honour was reserved for Frances Annie Tough.

That we record with deep regret the passing of Mrs F A Tough of Eton Wick. We rejoice in her long association with Primitive Methodism, first in Rotherhithe, and for the last 50 years at Eton Wick, which cause owes its existence to her initiative and enterprise, and the history of which is intertwined with her own life. She served in many capacities with great acceptance - as organist, Sunday School Teacher and Superintendent, Temperance worker, President of Women's Own, Trustee - and the larger interests of the Circuit and Connexion as an acceptable and warming Preacher of the Gospel. She was a woman of strong personality, abounding vitality, radiant faith. We rejoice she was enabled to do so long a day's work for Christ and Church and Kingdom, and that she was permitted to be active to the last. She had entered into a well earned rest, and her memory will be present amongst us for many days to come. To the relatives of Mrs Tough in their great loss we would extend our heartfelt sympathy'.

The funeral service was conducted by the Rev J Tolfree Parr, ex-President of the Primitive Methodist Conference and an old friend of Mrs Tough. His tribute to her filled several column inches in the Windsor and Eton Express under the title, 'Story of a Remarkable Lady'. The chapel was filled to overflowing and when the funeral cortege made its way to the churchyard the Eton Wick Road rang with the sound of the congregation singing hymns.

Her death, at the age of 67 came suddenly on 9th June 1930, and the whole village, whether Methodist or not, soon missed her presence. There was no one in Eton Wick who did not know of her and many still remember her robust figure, always clothed in black or very dark colours, and her high hat and long swirling skirts. Ardent Christian and with a great love, not only for Christ, but for those around her, she was a very forceful character, more than a little imperious at times, and not all will have loved her or even liked working with her - but few could ignore her. With her death a chapter in the history of the chapel ends. 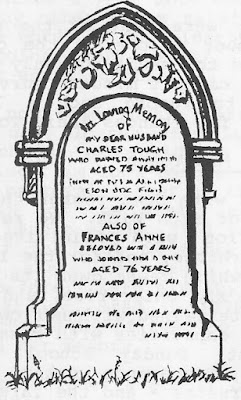 Me in Thy love,

To that fair realm where, sin and sorrow o'er,

Thou and mine own are one far The Eton Wick History website is a project born out of a friendship between John Denham and a former Slough Librarian, Alison Davies. In the early years of the Eton Wick History Group John used the Reference Section at Slough Library on a very regular basis for his many research projects. When Alison returned to her native Scotland she offered to set up a website as a way of staying in touch, that was in 2003.

John Denham was a founder member of the History Group and also its Archivist. For more than 20 years he brought together a significant collection of village memories, books and research material about the village and local area. The varied content of this website reflects this archive. This website currently has 370 articles and over 150 further pages of supporting documents.

History doesn't stop and the History Group are most grateful to have the permission of the Eton Wick Village Hall management committee to hold the Our Village Collection on this website. Three times a year since 2008 the Eton Wick Newsletter has recorded the activities of the village, its recent history. You can find the Collection by clicking on this link and the August 2021 edition can be found here.

A talk by Joshua Lovell - Thomas Lawrence and the Waterloo Chamber 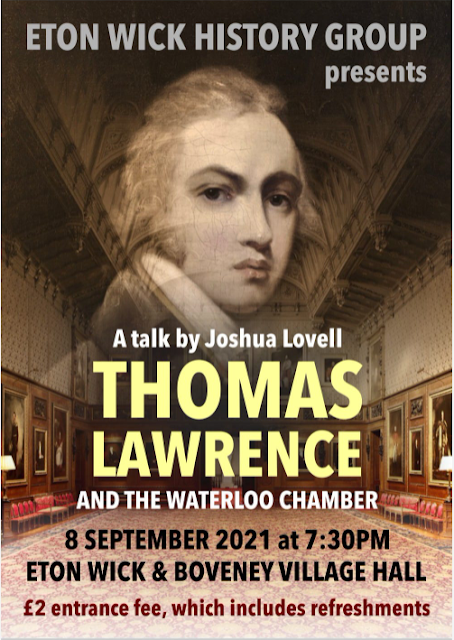 Posted by Steve Denham at 17:10 No comments: 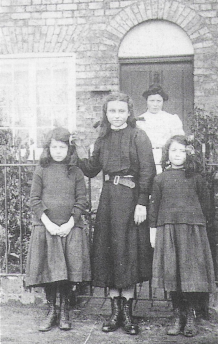 Mrs Dace is standing on the door step at Harding Cottages. Her daughters Ethel (married Harry Cook) and Alice (married William Akers) are on either side of Nellie Powell. The cottages were demolished for the building of Clifton Lodge Home for Senior Citizens. It is believed that the railings went as scrap metal as part of the 1939/45 War Effort.