The Village Hall in Eton Wick

1905
"Now that the Commoners of Eton have given their consent, and the piece of land presented by Mr. Vaughan has been freed from Lammas rights, we are justified in hoping that the Eton Wick Institute will be built, opened, and be proving a welcome addition to the comforts of the parishioners of Eton Wick and Boveney before many more months have passed." 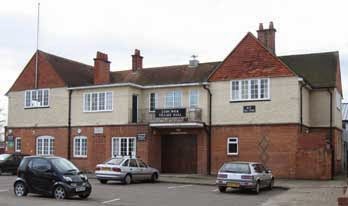 Eton Wick village hall, first known as 'The Institute', was opened on January 22nd 1907, the commemorative stone in the porch having been laid by Mr Vaughan on Friday November 16th 1906.

A brief ceremony attended by a gathering of parishioners and invited guests ended with the singing of '0 God our help in ages past' by the village school children.The evening entertainment on the day was given by Mr EMS Pilkington, the architect of the building, entitled 'The amusements of a London Boy' and illustrated with lantern slides.

The land was a gift from Edward Littleton Vaughan. a great benefactor to the village, known affectionately as 'Toddy' Vaughan. The purpose of the Institute was to provide recreation for men and boys and to encourage fellowship. Equipped with a billiard room, reading room and a bar selling non-alcoholic drinks with light refreshments, it quickly became a popular place replacing the old Working Men's club that had met at the Wheatbutts.

However, within the year the women and girls of the village let it be known that they were disappointed at being excluded. By December, due to the influence and kindness of Mr Vaughan, the situation was remedied and the formation of a Women's and girls club was formed. Girls over thirteen years of age could become members on payment of one penny per week and one shilling per quarter, allowing them to participate in gymnastics, dancing, sewing classes etc. Originally the upstairs room was for gymnastics with the billiard tables on the ground floor. This caused some inconvenience as the vaulting and jumping brought flakes of whitewash down from the ceiling onto the tables.

Over the years several village concert parties have performed in the hall, including a Minstrel Troop in the 1920's, and variety groups named the Shoestrings and the Unity Players post World War II.
The hall was enlarged in 1929 and further extensions were made in the post war years. During the early years of World War II the hall became the school for the evacuees billeted in Eton Wick.
Today the ground floor of the hall is used by the County library service and the Youth club, whilst the two rooms upstairs are used by village organisations for various activities.


How the hall began
The other seven were elected by ballot and were Messrs Burfoot senior, Long, Hammans senior, Ashman, A. Nottage, Elkins, and Blake.

At a subsequent Committee meeting, Mr. Vaughan was elected as Chairman.


1906
The Eton Wick and Boveney Institute is on the high road towards completion and already the handsome red brick building has called forth expressions of admiration from those who have seen it.
On Friday afternoon, November 16th, the Founder laid in the porch a massive stone bearing the inscription, " The Eton Wick and Boveney Institute, Founded 1906." In a short speech Mr. Vaughan stated his desire that the Institute should prove a boon to the inhabitants of the two parishes, and after mentioning his conditions—that the management must be entirely unpolitical and undenominational—declared the stone duly and properly laid. This interesting ceremony was witnessed by most of the members of the Committee (one of whom had returned from London expressly for the purpose), by the workmen engaged upon the building, and by the Architect, Mr. Pilkington.

A vote of thanks to the generous donor was proposed by Mr. Moore and seconded by Mr. Smith, who said he felt sure that Mr. Vaughan would feel amply repaid if the institute were used and appreciated by those for whom it was intended.

oooOooo
MR. Vaughan, Chairman of the Eton Wick and Boveney Institute Committee, wishes to express opinion on two points, as to which there has been some misunderstanding.