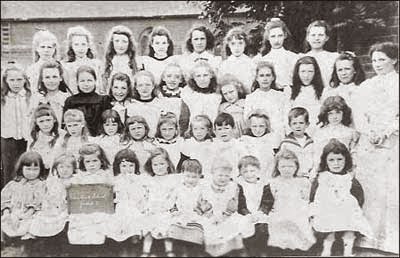 A photograph of Eton Wick School taken between 1903 and 1906. At this time the older boys attended Eton Porny School. Very few in the photograph have been identified but the teacher is believed to be Miss Stern, the Head teacher

An insight into the early days can be gleaned from the school log:

September 1899 Falling attendance due to the Lord John Sanger’s circus being in Windsor
12 January 1894  The recent snow had gone but the gravel roads were impassable
28 November 1894 The school had to be closed from the middle of November - serious floods had rendered the school unfit for use and the roads had become impassable.
20 November 1899  Visit of the German Emperor to Windsor: the school was given a half day holiday.

4 February 1901  Queen Victoria’s burial at Frogmore was made public and so a half day holiday was given.
1 June 1901  A half day holiday was given as Peace was declared (following the Boer War).
30 September 1903  School was taken over by Buckinghamshire County Council.
20 October 1905  The H.M. School Inspectors report that the school room is not fit to receive 85 children in one crowd.
2 April 1914 H.M. Inspector found that the air in the Infants room had become "vitiated" (of impaired quality).
5 September 1914  The school's long desks were replaced by the Education Committee with fifteen dual desks.
11 March 1920  Armistice Day was observed with 2 minutes silence. Sir Douglas Haig’s message was read, followed by the singing of ‘O God Our Help in Ages Past’.
3 September 1939  War declared against Germany (World War II).
September 1939  Evacuees arrived from London
Posted by Steve Denham at 17:26