The school diary records that the air raid shelters were removed in 1946 and school life was back to normal by 1947. As the school is of Church of England denomination an inspection by the Oxford Diocesan brought forth the following comment—

“The service was carefully and reverently conducted, but some of the older boys were inclined to loll and I should have liked to see a more alert attitude on the part of the bigger ones who should be an example to the rest. The singing was tuneful, but the general effect would be better if the boys did not stand anyhow and sing into their boots!”

January 29th. 1947 was a very cold winter and with fuel rationing still in force the classrooms remained very cold recording a temperature of 38f (3c) at the start of morning class and rising only to 41f (5c) by 4pm close of school. The daily temperature continued to fall, reaching a classroom temperature of 28f (-2c) on January 30th. The combination of heavy frost and snow made for difficult conditions and the school attendance dropped to 28 pupils on January 29th.

The thaw in the weather set in during the third week of March leading to severe flooding in Windsor, Eton and Eton Wick and forcing the village school to close from March 17th – 24th. In the following month, whilst the school was on Easter holiday, one pupil died from tetanus: it was thought to have been an infection from the flooded land. 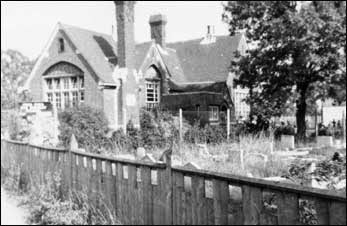 Photo of the school - probably taken in 1950s

Whilst the building work was taking place during mid 1960’s, some children were taught in the Village Hall where school meals were also partaken. 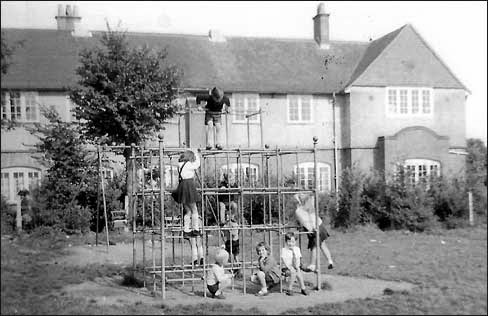 In 1965 class 7 pupils were taught in one of the ground floor rooms in the Village Hall, because of a shortage of accommodation in the school. The children are seen here on the climbing frame at the back of the Hall.

The use of the Village Hall for schooling ceased at the beginning of the summer term in 1966. Work continued on the completion of the Assembly Hall and Old building was converted to kitchen and dining hall.

In 1962 the school’s Parent Teacher Association donated a heated swimming pool for learners.

From 1882 onwards, the Head Teacher of the village school had always been a woman until the appointment of Mr V.C. Moss in 1955, which brought change to the school staffing. The longest serving teacher in the school’s history was Miss Florence Stearn, who was also the Headmistress, and who spent 32 years at the school (1903—1935). Ida M. Rooke, who was headmistress for 14 years (1941—1955), was followed by Mr V.C. Moss, the school’s first headmaster who held the post for 21 years. Headmaster Ian Hampshire was appointed on January 1st 1977, and was later followed by a new Headteacher, Mrs Robinson. The current Headteacher is Mrs M. Houston.


For at least 20 years after the Second World War, the children of Eton Wick school walked to the Village Hall every day at dinnertime. Well-balanced dinners were delivered every day by Buckinghamshire County Council. 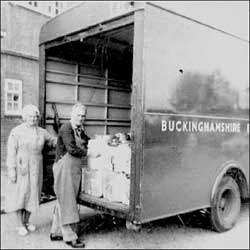 Many incidents go to make up school life, a summary of which can be gleaned from the book published to mark the School Centenary Year 1888—1988. There was some success in sport: at football under the tuition of sports master, Mr R.C .Nash, being League Champions in 1967; and in swimming, where the school won the Dolphin Swimming Trophy in 1969. 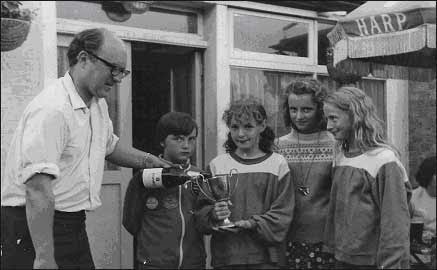 On several special occasions the Opening ceremonies were performed by personalities from the world of entertainment and sport. The new swimming pool was opened by Billy Wood, British Boys Diving Champion in 1962. Valerie Singleton from the BBC’s Blue Peter programme was a guest at the Middle School party in 1972, and there was a visit by the American Space Apollo Astronaut, Ed Mitchell, in 1977.

In 1993 the addition of a Foundation Unit allowed children to start school at three years old. The age for leaving the junior school for a more senior school was changed from eleven to nine years, with pupils generally going on to Windsor Middle School. 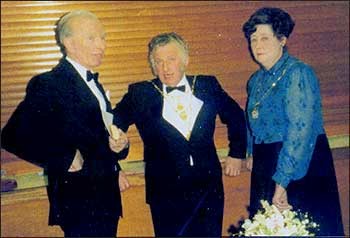 If you attended Eton Wick School, please use the comment box below to add your memories and any photographs of your school days.
Posted by Steve Denham at 09:08