The history of Eton Wick School: the beginnings 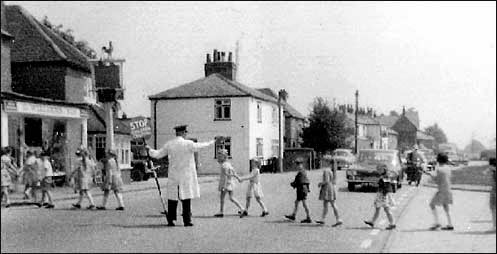 The children cross the Eton Wick road on their way
back to school after dinner at the village hall.
The lollipop man is Mr Cox.


In 1831 the Reverend Henry John Chitty Harper came from Oxford to be a private tutor at Eton College. He was an enthusiastic man of strong character who did not like to be idle. It was through his energy and enthusiasm to get things improved for the poor that the first schoolroom was built in Eton Wick in 1840 at a cost of £259, the ground being generously granted by Mr William Goddard at a nominal annual rent of 10 shillings. The building served not only as the schoolroom but also as a place to hold a service for the benefit of the villagers. It should be remembered the total village population at that time was less than 400.

This elementary school was built on part of the Greyhound Public House plot which then extended from Common Road to the Eton Wick Road. The school came under the auspices of the Church of England and took boys and girls from the age of four. Later as the village population almost doubled, the school had to be enlarged. With more mothers working as laundresses and servants with in the College and the trades people in Eton, children as young as two years were accepted to school which then required a balcony built to accommodate them.

A Church Diocesan report of 1879 stated that the school was satisfactory in every respect. The boys left at the age of six to go to Eton Porny School, whilst the girls stayed until they were 10 years. However, by 1886 development of the new community on land next to the village boundary (which became known as Boveney New Town) brought more overcrowding to the school and two year old children were no longer accepted at the school. In the October of 1887 the School Inspector said the crowded conditions were ‘unwholesome’, adding that improved accommodation would be a condition for receiving any future grants.

The little school room had served the village for some forty years but in 1886, after much discussion of several schemes, the decision was made to have a new school building. The estimated cost was £1000 to £1,100. This was a large sum which could only be raised by voluntary contributions or by the School Board. If the School Board raised the money it would be additional to the rates and a liability on all ratepayers. At the parish meeting it was agreed that the money would be raised by voluntary subscription. The site for the new school was to be a piece of Crown land given by Queen Victoria through her commissioners of the Treasury.


The new school was sited in ‘Sheepcote’ road, which in earlier times had been a farm track, and as the name implies had perhaps been an enclosed sheltered area for sheep and lambs.
This school building was of adequate size until after the Second World War, when housing development in the village during the 1950 and 60’s brought new families and the demand for school admittance increased. 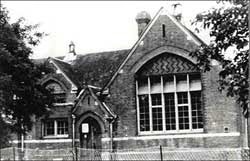