A brief history of Eton Wick 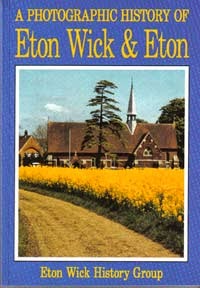 For hundreds of years Eton Wick of Eton Wick depended largely on Eton College and town for employment and trade. Fuel and produce was supplied to the town before the coming of Eton College in the mid-15th century, and to both town and college later. Local school boys were educated at Eton Porny School until 1939 when Slough and Eton (C of E) Secondary School in Slough was built. By the end of the 20th century, the development of Slough Trading Estate and other industries and services, and the vast improvements in transport had virtually severed this historic link.

Little more than a century ago, Eton Wick was being spoken and written of as a hamlet. Perhaps a fair description, as in 1841 there were only 62 houses in Eton Wick, and as recorded in Dr Judith Hunter's excellent book "The Story of A village: Eton Wick 1217 - 1977", this was three times the number existing 40 years earlier. These early dwellings were built on the marginally higher ground to the north of today's village; perhaps not noticeably much higher, but occupiers of those houses would testify to the importance of the extra inches during years of flood. Some villagers can still remember March 1947, when many homes were flooded, and yet the farm houses to the north, although surrounded by the flood waters, remained high and dry.

The growth of Eton Wick came about in spasmodic bursts and was always influenced and restricted by Lammas regulations and the parish boundary. The areas south and east of Eton Wick were Lammas and Common lands, just as they are today. Land to the west of Bell Lane was in the parish of Burnham and much of it belonged to the Palmer family of Dorney, or was part of Bell Farm. Bell Farm House itself lies just east of the boundary. The cottages built mainly for the farm workers, Bell Cottages and Bell Farm Cottages, were across the boundary in Burnham parish (it is said that the latter Cottages straddled the boundary line). It is likely at this time, in the mid-10th century, that the only other dwelling west of Bell Lane was the Shepherds Hut public house.

In the 18th and 19th centuries, most of Eton Wick development was along Common Road between Wheatbutts Field and Sheepcote Road, which was then only a gated muddy farm track. These early cottages had very long gardens or smallholdings, stretching in most cases from the building itself to today's main Eton Wick Road. The buildings backed onto Common Road, giving ready access to the stream and ponds, and the common, on which many inhabitants and livestock depended.

A few exceptions, built on the main road, included the Three Horseshoes public house and a terrace of ten small dwellings called Prospect Place (built 1833) with their gardens running down to the common. By the mid-19th century, Eton Wick population had risen from 100 to 300. Numbers were to increase in the 1860s when the long gardens and other available infill sites were built on. Many of these houses can be seen along the main road today, with construction date plaques on them such as Palmer Place, St Leonard's Place, etc. By 1880 the population of Eton Wick was approximately 500, but there was now very little land available within the old village for further growth.

The next big surge of building came in the 1880s to 1890s, west of the Parish of Eton Wick, when land formerly part of Bell Farm was made available for housing development. The residential area was known as Boveney New Town, and comprised of Alma, Inkerman and North Field Roads. It had its own parish council, and soon housed a population of 500, equalling that of Eton Wick parish. Both Parish Councils were then independent of Eton, and the two communities were conscious of their own identities, although very much inter-dependent.

Possibly the biggest incremental step in population came between World War II and the late 1960s, by which time the population was approaching 3000. Much of the post-war building development was carried out by the Eton Urban District Council (Eton Wick, which by now included Boveney New Town, lost its independent council in 1934). The new building covered Tilstone Field, the allotments which laid between Moore's Lane and the cattle gate to Dorney Common.  Privately owned dwellings were built on orchards and pigsties south of Victoria Road and Tilstone; older dwellings along Common and Sheepcote Roads were demolished to make way for houses and flats, bringing the population to much the same size as it is today.

An important feature of Eton Wick has always been its surrounding Common and Lammas lands, the Rights of which have been jealously guarded over the years. In 1965 these lands were registered under the Commons Registration Act and it is only with the consent of the Secretary of State for the Environment that such lands can be released for development.