The Eton Wick Scout Troop was first formed in the early days of the Boy Scout movement before World War I by Mr E. L. Vaughan, a master at Eton College. The photo shows the troop at camp at Osmington Mills near Weymouth, August 1914, with their Scoutmaster E. L. Vaughan. 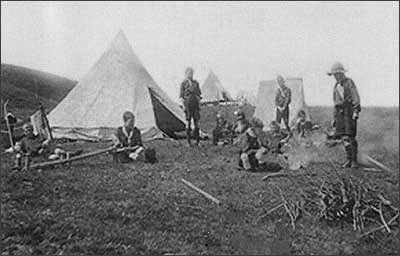 The camp was held at the outbreak of World War I; George Percy was destined to be killed serving on the Western Front, while Bill Woolhouse became a prisoner of war. He suffered severe facial wounds, which were tended by his captors.

The troop having been disbanded during the war, a new Troop was formed in October 1926. Mr Sharp was appointed Scout Master with Mr Wetherhead as Assistant Scoutmaster, and Mr E. L. Vaughan became Chairman of the group. To set the group off, Eton College Scout Troop offered secondhand uniforms at 2/6d each, the colours being green and white. Weekly subscriptions were 1d a week, and the troop met in the Eton Wick School Room.

In February 1927 Mr Evans, Vicar of Eton, took over as Chairman with Mr Vaughan becoming Vice-chairman. The group flourished with twenty Scouts attending their first camp at Lulworth Cove, Dorset at a cost of fifteen shillings a head.

February 1928 brought changes in the leadership with Mr Weatherhead becoming the Scoutmaster, assisted by Mr Judd who later became Scoutmaster of the Eton Troop.

Good Scouting achievement won badges and awards, and one particular feat won special recognition. William Hodge, a nine year-old Wolf Cub of the 1st. Eton Group, was awarded the Scout Gilt cross and Certificate by the Chief Scout, Robert Baden Powell, in April 1929. William and his friend, six year-old Alan Kingston had been playing on the ice, when it gave way under their weight and Alan fell through. William and another boy tried to pull Alan out but the ice gave way under their combined weight and they also went under. William continued his efforts alone after the other eight year-old boy left the scene. Eventually William succeeded in pulling his friend out of the freezing mire, no doubt averting a fatality. 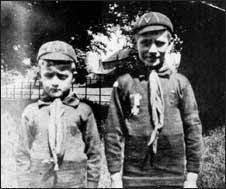 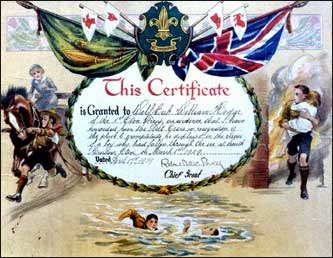 Certificate awarded to William Hodge by the Chief Scout, Robert Baden Powell, to accompany his Gilt Cross. The certificate reads: This certificate is granted to Wolf Cub William Hodge of the 1st Eton Group as evidence that I have awarded him the Gilt Cross in recognition of the pluck & promptitude he displayed in the rescue of a boy who had fallen through the ice, at South Meadow, Eton, on March 1st, 1929.

The Eton Wick troop continued to gathered numbers and in January 1930 a Scout Cub Pack was set up under the leadership of Miss Clatworthy. Another welcome phase was the completion of the new Scout Hut during 1930. The hut was located in Wheatbutts field, the site being leased from Mr Vaughan, the owner of Wheatbutts.


The first Scout Hut in Wheatbutts

Building of this Scout hut had started in 1927: Ernest Coke, who joined the Scouts in 1927, helped his father with the building work. This Scout hut was destroyed by fire in 1963.

The Girl Guide Company was formed in the 1920’s and met at the Village hall. The photograph is of the Eton Wick and Boveney Guide Company outside the hall (known in earlier time as the Institute) in the 1930s. 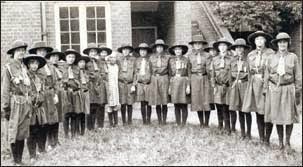 A diary of events for the Troop covering the 1930’s is not available but it is remembered that there were changes in the leadership, with Mr Williams, Mr Short, Mr Ernie Coke and Mr Maoelin becoming leaders. The last two were Rover Scouts; Ernie Coke later became Eton Wick Troop Scout Master. Another local troop change during the 1930’s was the troop scarf which went from green and white to black and white. 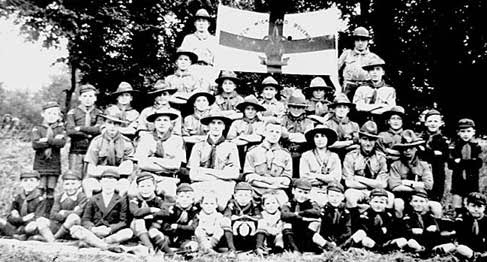 This particular Scout Troop was formed in 1926. In WW2, Stan Bond was killed in the Desert campaign and Walter Pates (an air gunner) over France.

There is no record showing how active the Scouts and Guides were in the village during the Second World War. A local newspaper report on paper and metal salvage within the village says that the Guides went about the task with so much enthusiasm that "if it was not screwed down on the cart it went", while the boys showed little interest in salvage!

It seems that the Scout Troop ceased sometime during the war years as from the diary we learn that a group meeting was held on March 1st 1946 to discuss reforming the 1st. Eton Wick and Boveney Scout Group. A new committee was formed and the Reverend Hare appointed Chairman. Mr Stevens became the Cub Master and Miss Morris became Guide Leader.

In 1949 Ernest Coke became Scoutmaster and reformed the Scout Troop with his leadership. Also at this time, Mr Peter Morris took over as Cub Master. 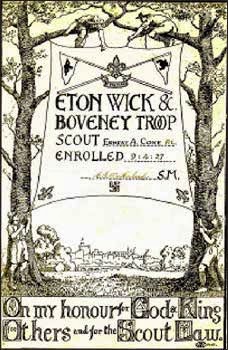 Ernie Coke enrolled as a Boy Scout in the Eton Wick Troop on April 9th 1927. 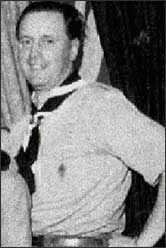 
He became Scout Master of the Troop in 1949. After he retired, his son John Coke took the post of Troop Scout Master in the late 1960’s.

To raise funds for new equipment the troop turned to collecting waste paper and holding fetes, and in 1952 were able to purchase new Troop and Cub flags, tents and other equipment. The new flags were dedicated by the Reverend Hare at St John the Baptist church, Eton Wick. 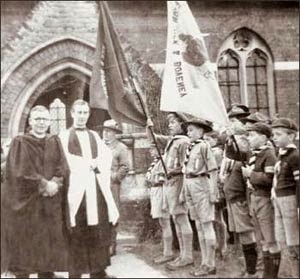 The first Scout Fete held in 1952 in the Wheatbutts. The fete was opened by Geraldene McKeown. Also in the photograph below are Bob Bond and Ernest Coke (Scout Master). 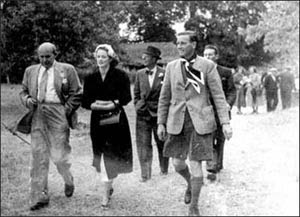 
During 1952 John and Margaret Fennel became Cub Masters of the Eton Wick Cubs. The photograph below shows Margaret Fennel (Eton Wick Cub Akela) and Ernest Coke viewing the gold Medal of Merit for outstanding service to Scouting which was presented to John Fennel, Area District Commissioner in November 1964. 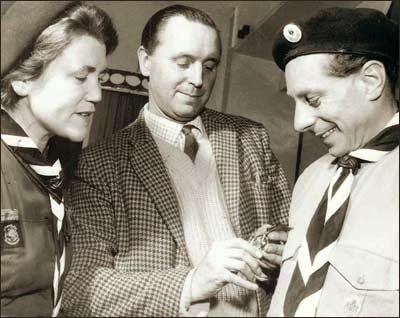 John Fennel and his gold medal of merit 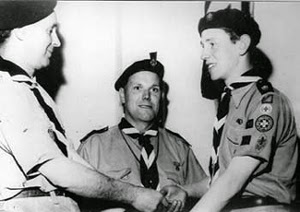 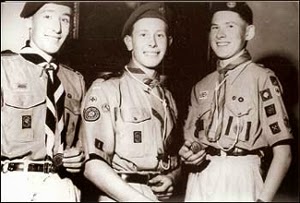 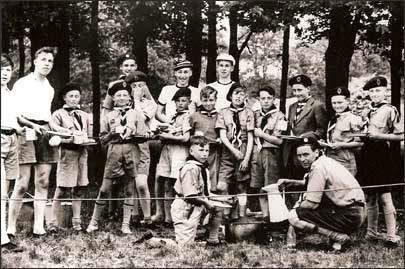 Eton Wick and Boveney Scout Camp Scout Rally, Beaconsfield, 1954.
Some of the boys are holding tin mugs, which are about to be filled from the pitcher. Among those present (left to right) were Mike thorn, Alec Benham, Chris Smith (at back), David Springford, unidentified, (?) Pitchard, Rob (?) Hood, (?) Emery, Terry Harman, Tom Foster and Tony Clibbon. Kneeling on the right is Ern Coke the Scout Leader.

The 1960’s were eventful years for the Eton Wick Scouts and Guides, and the Cub and Brownie packs. In January 1960 the Eton Wick Wolf Cub Pack entertained ten American boys from the 178 High Wycombe pack at the Wheatbutts Scout hut. The Windsor and Eton Express reported that the guests were welcomed with a “Grand Howl” and entertained with a sausage and mash supper, games, and a camp fire sing-song. 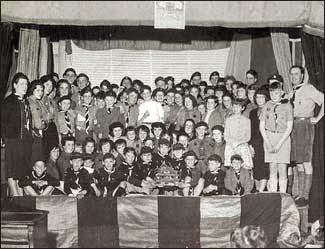 
After raising money in a ‘Long Slog’ by Scouts, Guides, and parents, the new Scout hut was opened in December 1960 by Air Commodore E.L. Brodie, County Commissioner (Scouts) for Buckinghamshire. During the opening ceremony the Air Commodore unveiled a portrait of Baden Powell which had been given by Colonel Butcher, the Chief Scout Commissioner for Australia. Also during the ceremony Margaret Fennel was presented with a medal of merit for outstanding service to the movement, recognizing her many years' service as Cub Master, Guide Captain and Ranger Skipper. 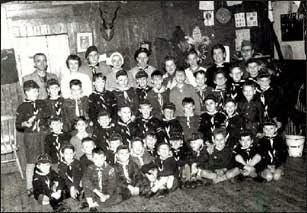 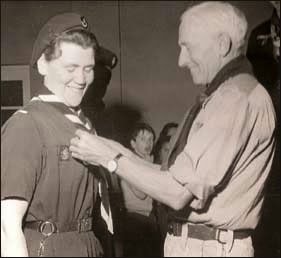 The Scouts' and Guides' fundraising activities included the annual Scout Fete at the Wheatbutts, camp fire evenings, Gang shows, Bob-a-Job weeks, and the collection of waste paper. The money raised was used to organize Christmas parties for Eton Wick pensioners, to send Scouts to the World Jamborees, and finance the annual Scout and Guide camp. 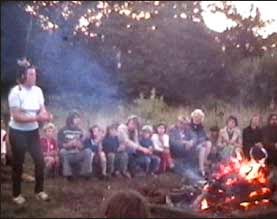 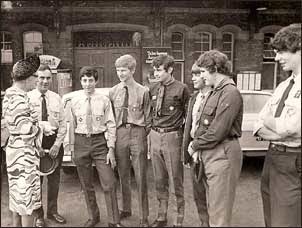 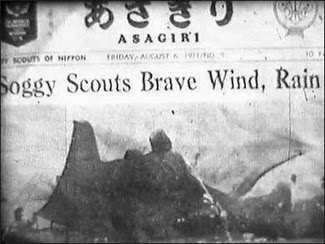 The 13th World Jamboree scout camp was struck by a hurricane 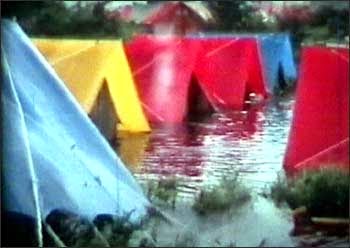 Flooding at the 13th World Scout Jamboree, following a hurricane. Many scouts had to be evacuated to schools and public buildings by the Japanese Home Defence Force and the American Army.
Scouts digging drainage ditches 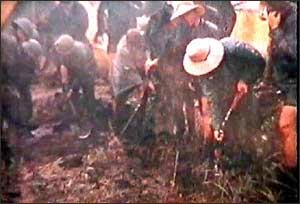 The British contingent dug drainage ditches in their camp.

The Buckinghamshire Scouts contingent performed a sword dance at the Jamboree, taught by the Datchet Morris men over several weeks before the Scouts left for Japan. The final act of the dance involved interlocking the individual swords for one member to hold aloft a star made by the interlocking swords. 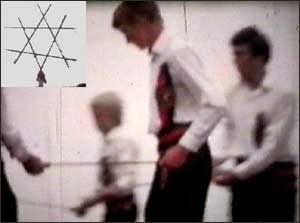 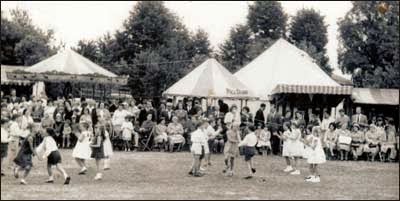 In July 1997 a disastrous fire, thought to have been started by vandals, destroyed the Scout Hut. Many trophies and much equipment was lost. Although the building was replaced, money for new equipment had to be found.

Many fundraising events were held by parents and well-wishers, including a Valentine Dance, car boot sales, and a firework night. £6000 was raised for replacement gear, but much memorabilia was lost for ever. The new Scout hut was opened by former England Rugby Captain, Will Carling, in 1998. 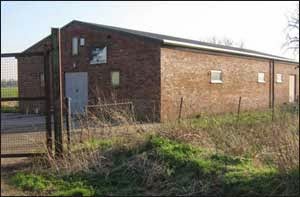 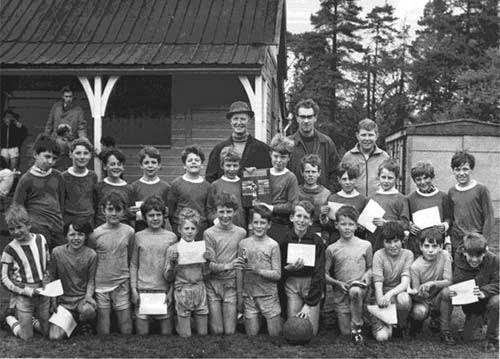 This picture was provided by Martin Deebank, who wrote:

"The photo is of the Cubs team around 1968/9, after playing in an end of season cup competition on the day of my birthday party. If I remember rightly, we had hardly won a game all season, then we played this cup competition (possibly at Richings Park - it was somewhere near the Crooked Billet roundabout at Iver Heath). We expected to get knocked out in the first round, but we managed to get to the final (so making me late for my party).

The Eton Wick cubs are in the front row; left to right as you look: Paul Miller (?), Rod Pethybridge, Steve Hynam (his parent's went on to run the Pineaple pub at Dorney), Andrew Everitt, Bruce Gould, James Moss, Roger Paintin, Martin Deebank, Paul Connor (later to die as a teenager in a horrific motor-bike accident outside the Grapes pub), don't know (?), don't know (?), Martin Rowlands. Our manager Terry (?) Reeves is the chap on the right behind the players."

"In the loft I've still got a scrapbook that the Brownies did for the Diamond Jubilee celebrations of the Guiding movement. Names of the Brownies who helped to compile the scrapbook are inside the front cover. They are as follows: Gnomes - Irene Brudenall, Diane Jarratt, Kay Symons & Cheryl Norbury; Elves - Lisa Hunt, Heather Caley, Fiona Hunt & Jane Greenwood; Imps - Pauline Sharp & Elizabeth Reilly; Sprites - Nancy Attride, Christine Marik & Jennifer Hughes.

Also, I think that my mum has sneaked into one of the photographs on your site. Under "Eton Wick Scouts" it looks like her 5 from the right (with the white hair) in the picture of Margaret Fennel leading the Cub's campfire sing-song."

Would you like to share your memories of your time as a Scout, Guide, Cub or Brownie with the Eton Wick or Eton Troop? Maybe you were involved in their competitions, or in committee work?

If you have any stories we could publish on the website, please get in touch by sending an email to guestbook@etonwickhistory.co.uk. If you have any photographs, even better!
This article focuses on the Scouts and Cubs, but it would be good to hear from former Guides and Brownies too.

There are other memories of Eton Wick Scouts in the article "A Sixties Childhood in Eton Wick" by Steven Denham.
Posted by Steve Denham at 11:46