The Hayward, the Cattle Pound and the Common Lands


The hayward grazed the cattle over Lammas lands from the commons, the Slads, Eton Wick Recreation Ground, South Field and back home. The milking herds have virtually all gone, and with them the hayward, but the name lives on in Haywards Mead housing development. 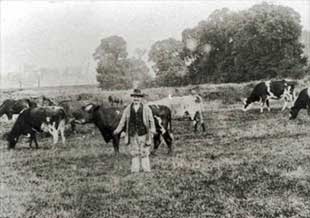 Mr 'Hammer' Stannett, for many years the Lammas Hayward.


Close to the road on the outskirts of Eton is a small brick enclosure - the Pound which was once used to impound cattle and sheep which had strayed from the field and the commons, or which belonged to people who did not have common rights. 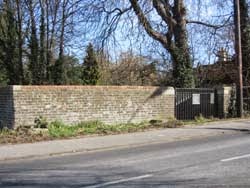 The present pound (pictured here) was built in the 19th century, but there were several earlier ones.

The Hayward was responsible for placing strayed or unauthorised animals in the Pound; owners had to pay a fine before the animals were collected. In the early years of the twentieth century the fine was 6d (6 pennies) per beast for the Hayward, and 10 shillings per beast to the Lord of the Manor. 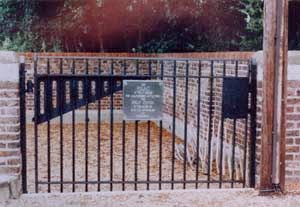 The plaque on the Pound gate reads:


There are two commons in the manor - Eton Great Common, which stretches from Eton Wick to Eton, and the Little Common to the north of the village. Commons were permanent pasture where animals belonging to those with common rights were allowed to graze from 1st May to 12th August each year, in the charge of the Hayward. For horses, cows, sheep and children May Day was an exciting day in Eton Wick!

Each commoner could graze his stint - an allotted number of animals based on the area he farmed. One beast was also allowed for every farmstead, house and cottage. The commoner must own the animals and mark them clearly.


The name "Lammas" comes down from Saxon times. The name originally referred to the "loaf mass", a special religious feast which celebrated the first fruits of the harvest. Lammas Day used to be 1st August, but after the reform of the calendar in 1752 it moved to 12th August. In Eton and Eton Wick the Lammas lands were the large common fields - arable and meadow - which were subject to common pasture rights. This meant that after haymaking and the corn harvest, the cattle, sheep and horses belonging to the commoners (that is those with common rights) were allowed to graze those fields until 31st October.

Lammas rights might well have been a hindrance to the introduction of new crops, such as turnips and potatoes, but in the early 18th century the Eton Court Baron changed the rules to allow the farmers to grow a limited amount of turnip for winter feed for cattle. In earlier times there had been as many as eight farms with livestock in the parish, but there is now only one.

Down the centuries the commons and Lammas lands have had a great influence on the development of the parish. Thanks to them, much of the land has been kept free from buildings. Otherwise the river bank might now be covered with bungalows, and Eton and Eton Wick might have become joined into one large residential district. Instead, the commons and Lammas lands were registered under the Commons Registration Act of 1965.

For more about the Common lands of Eton and Eton Wick, see "The struggle to keep the common land".
Posted by Steve Denham at 20:51