During the war many children were sent away from cities like London to live in "safer" areas. The experiences of some of those evacuees, and the families with whom they were billeted, are remembered here. 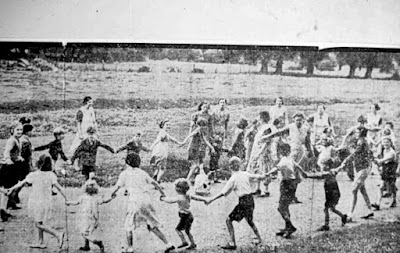 Eight hundred evacuated children from London were scheduled for Eton and Eton Wick but only 578 arrived. On arriving at Eton Wick the evacuees assembled at the village hall where potential foster parents were waiting. Some children were distraught when they realized they were to stay with a strange family and because the potential foster parents were allowed to choose which child they took.

Difficulties sometimes arose as families, brothers and sisters and sometimes mothers and children were split up but most children quickly settled into their new homes. Some fostering families viewed the situation with trepidation as they remembered stories of the East End slums and wondered how they would cope.

As no early air raids took place on London some of the evacuees returned home after a few weeks, but others stayed for the duration of the war whilst a few stayed married and now live in Eton wick.
Sylvia Collier who stayed recalls that weekend in September 1939:


"Mum had put our names down for evacuation and was told that we were to be ready to go if the war became more imminent. For a fortnight we had practiced getting to the school early with our belongings and forming into our respective groups. Our school, near to Wormwood Scrubs, had forty classes so took most of the children in the area where with we lived. On the morning of September 1st we assembled and made our way to East Acton Station to board the train for our unknown destination. My brother and I thought we were going for a fortnight, so unconcerned, waved goodbye to Mum as the train pulled away taking us to Wiltshire. Our mother, with my five year old brother, had stayed behind to care for her elderly father but was told on the Sunday morning to be ready to go, as it was advisable to get all children out of London. Her destination was the Willows, Windsor. Later we were able to join Mum at the Willows".

One evacuee still remembered is eight year old Roy Langdon who was billeted at 'Perseverance Place' with Mr and Mrs Harding. His school had evacuated from Hammersmith which, with a school from Stepney, made up the allocation to Eton Wick.


" He arrived complete with cardboard suitcase, gas mask, a tin of corned beef and a tin of Libbys milk. The revealing thing about Roy was his East London accent. One day during a discussion on the impending sugar ration, Roy chipped in with "My dad's got a sack of sugar, he knocked it off darn the docks'"

Within a week Roy's parents were down to see him. Air raids on London had not materialized so Roy only stayed a few weeks before being taken home by his parents.

The different home life of the evacuee to that of the foster parent at that time brought about difficult and amusing situations such as Mrs Cook's experience with her two billeted girls, Iris Birch and Betty Garcia.


"The first week one of the girls refused her Sunday dinner and when I asked what was wrong said, "I want my Sunday dinner". Questioned as to what her Sunday dinner usually comprised, the answer came, `"Tatters, Ham and Beer!''. On another occasion the girl came running into the house exclaiming "Quick missus, Go and jaw that women next door she's calling you names".What was calling turned out to be a Cuckoo bird, the call of which she had never heard before."

Evacuees found village life very different from that of London, to them, the new growing crops of cereal looked the same as other meadow land, so having been caught playing in a field of oats, they failed to understand why they would damage the crop which to them looked like grass.

Other schools evacuated to Eton and Eton wick included The Hamlet of Ratcliffe Central School, White Horse Lane, Stepney. From there came George White who found his wartime home with Mr and Mrs Cox, staying until he joined the army in 1943. Before enlisting he had made his mark with others, as a musician entertaining the troops stationed on the Dorney common camp. A small number of pupils also came to the village from the Green Coat School which had evacuated from Mile End but the majority of these were billeted in Eton.

Not all homes were suitable to take evacuees, and among those that were suitable the Billeting Officers at times met with householder objection. Initially there was choice as to whether or which child was taken, but eventually the Government took powers to enforce the acceptance of an evacuee if room was available in the home. A weekly billeting allowance of ten shillings for the first child of school age and eight shillings and sixpence for each additional child with three shillings and sixpence available for laundry if a child was bed wetting was paid by the Government.

Some evacuee children were perturbed by their new surroundings, finding it hard to adapt from city to village life, and difficulties did arise between foster parents, evacuee and the Billeting Officer. Often health problems, discipline within the home and the extra work involved for the housewife was the cause which put a strain on the family relationships. Difficulties arose within one village family where the health of the wife suffered so much that it became necessary to place the two evacuees in other accommodation. After a suitable period of time the billeting officer tried to place other children with this family. This was unacceptable to the husband whose refusal to take further evacuated children resulted in a Summons being issued to him by the Eton U.D.C. under the War Emergency Acts. The husband’s appearance before the court resulted in a fine of eight shillings.

The precaution of evacuating not only applied to children, some essential services also left London, such as food distribution establishments which brought the Billingsgate Wholesale Fish Market to Datchet.

This memory was recorded as part of  the Eton Wick History Group's Recall 60 years on project to celebrate the 60th anniversary  of the ending of World War 2.
Posted by Steve Denham at 12:15