How Eton Wick got it's name

The origins of Eton Wick's name by Judith Hunter


The origins of Eton Wick are unrecorded but a clue may be found in its name.  The words themselves are old English and the name Eton was given to that village by the Saxons who, together with the Angles and Jutes, colonized this country in the fifth and sixth centuries A.D.  The first part of the name the 'E' - has the same meaning as the suffix 'ey' of Dorney, Boveney and Chalvey and it would 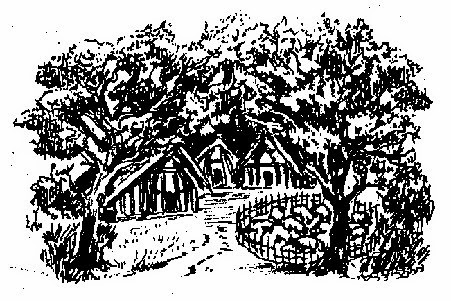 seem that all four villages were built on eyots or islands, small areas of drier land a few feet higher than the marshier land that surrounded them.  The damp oak woods of this part of the Thames valley were not particularly attractive to the Saxon farmers and it is more than likely that these sites were not used until the more favourable areas were fully settled.

From the suffix 'ton' we get our modern word, town, but in Saxon times this merely meant a village and the first Eton, situated somewhere in the area of the modern town, would have consisted only of a small collection of homesteads and a chief 'shall surrounded by a palisade.  Beyond the 'ton' the  Saxons cleared the land for their large arable fields which they worked as a community.  By the streams, the land too wet for ploughing was left as meadow for hay, and beyond the fields and meadows was the common or waste where the animals were pastured in the summer.  Here too were the woods not yet cleared, a very important part of the economy of the settlement - as a source of building material, fuel and food in the autumn for the swine.

Sometime after the establishment of this first 'island village', perhaps only a generation or so or maybe a few hundred years, a fresh part of the woods or waste was cleared and a group of   buildings put up where the dairy animals could be sheltered and probably butter and cheese made.  In modern terms it might be described as the    village dairy farm, though in those days the      animals were likely to have been both sheep and cows, for sheep provided both wool and milk and could live on poorer pasture.  In the words of the Saxons this was the village 'wick' - Eton Wick had been born.

Email ThisBlogThis!Share to TwitterShare to FacebookShare to Pinterest
Labels: Judith Hunter, Local history, The story of a village