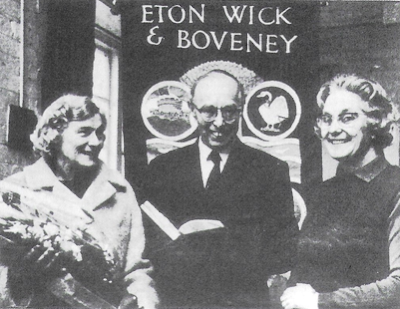 Harry Chantler and his wife Hilda being presented with a cheque and a bound book containing the signatures of many local residents marking their respect and affection, on the occasion of Harry's retirement in March 1973. Harry's father took on the village store at Clifton House in 1929. Following his father's death in 1932, Harry carried on the grocery business and sub-post office for over 40 years. He was active in many local organisations, being a member of Eton Poor Estate, the Parochial Church Council and serving as a School Governor. The presentation took place at the Women's Institute meeting and was made by the president, Mrs Joan Ballhatchet (right).