The changes did not begin in 1966 - they had already started several years back when the first discussions took place over the question of Anglican and Methodist Union. In the village there was even talk of a new, shared church, but only one joint event actually occurred that first year, a carol service in the church of St John the Baptist, to which members of the chapel were invited. In subsequent years there were to be several occasions when members of both churches shared services especially at Christmas, Covenant and Patronal Festival.

On the 6th of December 1969 a united youth club was launched. Their first meeting was held in the Memorial Hall with Dennis Nelson as the Methodist leader, but like the other youth clubs started in earlier years, this was also destined to last only a short time and the number of Methodist youngsters who joined was disappointingly small. The chapel's commitment to youth work, however, remained strong and throughout the 1970s a few young people from the chapel attended the annual youth weekends arranged by the Circuit. The good relationship between the chapel and the Church of England has grown and encompassed also the Roman Catholic Church of St. Gilbert. On a very practical level, the three village churches have accepted joint responsibility for the churchyard and contribute to the fund set up for its maintenance.

Meanwhile the chapel Sunday School was not doing very well. The numbers were still falling, as they were nationally. From 42 children in 1967 they had dropped to a mere 33 by 1975. The following year brought a small influx when the Church of England Sunday School closed. History had turned full circle. Who could have envisaged this a hundred years ago when the Rev. Keating tried to shut Mrs Tough's first small Sunday School held in the Iron Room? The pattern of Sunday School 'life, however, had changed. Numbers fluctuated and in some years, there was a very pleasing number of younger ones, but few stayed beyond the junior stage despite more attempts at mid-week youth club activities. Scripture examinations ceased to be taken in the 1970s and the Sunday School anniversaries which were great Sunday and weekday events in the 1960s (as the scholars proudly recited or sang to the congregation the poems and hymns they had learnt) were gradually phased out. More encouraging were the family services, held once a month, which brought the parents of many of the younger scholars to the chapel.

The introduction of the Mums and Tots Group in 1985 was a new venture, and though Mrs Tough would probably not have used these words, undoubtedly, she would have approved. The 5.50 club was founded in 1982 and is aptly named as its teenage members meet at 10 minutes to 6 each Sunday evening for half an hour of discussion with Mr and Mrs Wigmore. 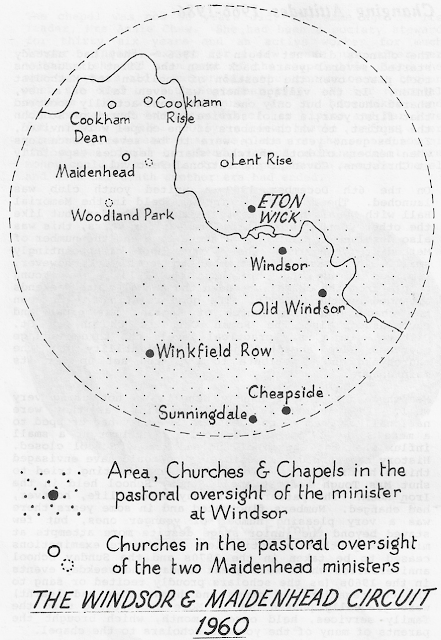 1976 brought an unprecedented change in the organisation of chapel affairs when an Act of Parliament extinguished the Methodist Church trusts and replaced them with Church Councils. No longer was the fabric of the chapel to be the responsibility of the old-style trustees and their last meeting was held on the 10th November of that year. The change-over became known as restructuring with Eton Wick subject to the rules laid down for churches with less than sixty members. The change took place gradually, and in fact the Church Council had already come into being two years earlier, replacing the Leaders' Meetings. From 1976 the Council took on the responsibility of chapel maintenance and from this date concern for the chapel building became the duty of the Eton Wick Church Council, rather than that of trustees, who had always included people from other churches and chapels in the Circuit. It was quite a heavy burden to take on, for the chapel was now ninety years old and showing its age in spite of all the loving care that had been expended upon it. Membership had now risen to 39, but even if growth was still slow, at least the ability to raise money was still one of the notable features of the chapel.

Year by year the minute books tell of the Council's attention to the needs of the chapel - new service books, windows, tables, chairs, repairs to the roof, to the floor, guttering, rewiring - the list is endless and so is the need to raise more money. Coffee mornings, jumble sales, weekly subscriptions, saving boxes, bring and buy sales - these are the usual methods of collecting money and there is nothing very special about any of them, only the amounts collected. The chapel really has a very remarkable record in this direction.

Although a considerable proportion of the money has been used for the chapel, the greater part in most years has been destined for the work of the Methodist Church at home and abroad. The Overseas and Home Missions, JMA and Women's Work remain important, but there is now also a greater awareness of other needs, such as international disasters, poverty in inner city areas and the changing role of the missionary. Since the 1970s money has been regularly sent to the Methodist Relief Fund as well as to individual disaster funds, and the Christian Aid envelopes have been distributed and collected every year. In 1978 and '79 money was given to help modernise International House in London which is used by overseas missionary students who come to study in this country. In 1983 the Methodist Conference initiated the Mission Alongside the Poor Fund whereby it was hoped that the Methodist Church would raise £l million within five years to help the most needy areas in this country. This is another fund to which the chapel now regularly contributes. A hundred years ago Mr Lodge, who chaired the first meeting at the chapel, remarked that Methodists were expected to give in both time and money. Clearly this has not changed. Several times Eton Wick has been the third largest collector for Overseas Missions in the Circuit and top of the list when the amount raised was calculated per capita. Not for nothing did one Minister call Eton Wick 'the most generous chapel in the Circuit'. In 1985 the Circuit, in common with most other Circuits in the country, recommended the adoption of a new hymn book, 'Hymns and Psalms', but in this matter the members communion stewards, and the poor or benevolent fund ceased to be kept separate from the general chapel fund. Social responsibility and community care, however, are still regular items on the agenda and reflect the chapel's concern-for the community outside the chapel as well as within. Outreach is the new word describing the churches efforts to reach out and influence those who are not yet committed Christians. The word gives a different idea of what is being attempted, and indeed the means and ways are different, but sometimes it is difficult not to reflect on Mrs Tough and her efforts to bring people to Salvation.

The restructured Methodist Society now functions on a well documented and all too familiar set of plans and reports which reveal a variety of programmes and activities covering talks, demonstrations, visits, outings, Fundays, special services, anniversaries, Christmas and Easter festivals and Harvest thanksgiving. The calendar-of events both locally and within the circuit is full and extensive and the corporate sprit is high.