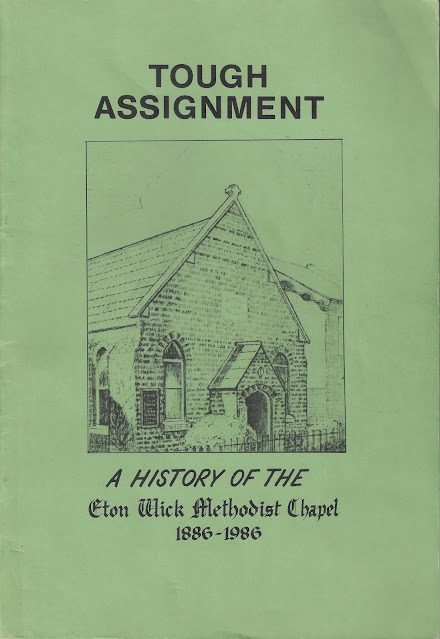 2021 will see the the 135th anniversary of the opening of the Primitive Methodist Chapel in Alma Road in what was then Boveney Newtown. In 1986, the Chapel's centenary year local historian, Dr Judith Hunter publish A History of the Eton Wick Methodist Chapel, it was sold for £1.95 per copy.

One Sunday afternoon in 1863 two small girls in Rotherhithe became so curious to know what there was to interest the many children attending the Sunday School in Union Street that they followed them into the chapel. A small event, perhaps, but one which was eventually to have far reaching results in Eton Wick. The elder of the two girls was Frances Annie Moore then only ten years old, the daughter of John Moore, a mast and oar maker. Her parents were not Methodists, but they allowed their daughters to be enrolled in the Union Street Sunday School. Annie, as she was usually called, blossomed under the teachers there, finding real joy and vocation in belonging to the church. As she grew older she became one of its most devoted workers, first as organist, then Sunday School teacher and finally class leader (a position of considerable responsibility in the Methodist Church). By this time Annie Moore was a young woman, and a wholehearted Christian who already believed it was her mission in life to win others for Christ.

In 1877 Annie married Charles Tough, a sturdy Scotsman, who had recently been appointed manager of Bell Farm, Eton Wick. It was here that Annie was to begin her married life and a new chapter in her religious experience.

At this time Eton Wick was a very small country village, its houses - less than a hundred in number - mainly concentrated between Bell Lane and Sheepcote Road, and between the common and Eton Wick Road. Beyond this area there were several farms and farm cottages, and across the parish boundary into Boveney there was just one cottage. This was the Shepherds Hut. North and south of the public house were the Tilstone Fields, then mainly arable, but now only a nostalgic memory in a modern housing estate.

The village, though very small to the modern eye, had grown rapidly during the preceding decades; indeed it had almost doubled its population since 1840. Many of the houses facing the main road had been built only a few years before. They were good working class houses, their bright yellow bricks and purple slates contrasting strongly with the warm reds of the older houses to be seen on the common side of the village. The villagers were mostly working class folk - labourers, tradesmen and artisans, many of them finding their employment outside the village. The elite were the farmers, such as George Lillywhite of Manor Farm and John Cross, tenant at Saddocks; only they could afford servants. For several years Bell Farm had been uninhabited, but it had recently been bought by the Eton Sanitary Authority for use as a sewage farm for Eton. Charles Tough was thus more than just a farmer, and although the use of the land was such a revolutionary one locally, the farm and the house itself were amongst the oldest in the parish.

For centuries Eton Wick had been part of the parish of Eton and since the 15th century the parish church had been Eton College Chapel, with the Provost as rector. Until the 19th century the villagers had looked to Eton (or beyond) for their spiritual needs. The great religious revival and spiritual awakening that spread across the country as a result of John Wesley's preaching in the 18th century reached Eton Wick in the early 19th. There was a Methodist Society in Windsor as early as 1800 which grew and flourished, and a small Wesleyan society in Eton Wick itself for a few years in the 1830s, but it was not they, but the Windsor Congregationalists that first brought church services into the village. These services and a Sunday School were held for many years in cottages until, sometime before 1840, a barn was acquired for use as a church. It probably belonged to George Lilywhite of Manor Farm. Some years before the arrival of Mrs Tough to the village the barn was replaced by an 'iron room'. It was somewhere on the common, badly situated according to Annie Tough's own memories so that it was often difficult to reach without going ankle deep in mud. Services were held only on Sunday afternoons, and in Annie's opinion these were 'dead and lifeless' and greatly disturbed by the noises of chickens, ducks and cattle which came right to the chapel door.

The Church of England had begun to take a far greater interest in the spiritual needs of Eton Wick after the arrival of Henry Harper at Eton College in the 1830s. He was one of the college chaplains and within a short time he had taken special responsibility for Eton Wick. Through his endeavours a small school room was built at the corner of The Walk and Eton Wick Road. It was used as a church day school and a Sunday School as well as being licenced for services. On 'Census Sunday' in 1851 eighty people attended the afternoon service and twenty eight children the Sunday School. Twenty five villagers went to the Congregational Church.

For several years the schoolroom served the village adequately as a church, but by the 1860s the increase in the population made it far too small. By 1865 the first moves had been made to build a daughter church (or chapel of ease) in the village; two years later St John the Baptist's Church was consecrated.

Not long after this, in 1875, Eton College Chapel ceased to be the parish church, the church in Eton High Street taking over this role with the Rev John Shepherd as the first vicar. Pastoral activities, which had begun in the 1830s, had greatly increased, and people in Eton Wick were now feeling the benefits of a shared curate, a district visitor and cheap nourishing food from the Eton Kitchen. Help also came from various new church charities such as the Provident Fund and the Lying-in Charity. The Eton Wick School was still a church school and in 1877 received recognition from the Government as a certified efficient school.

There were 106 children on the register and the average attendance at the Sunday School was reported as 41 boys and 51 girls. Under the auspices of the Rev John Shepherd and his workers there is no doubt that both the spiritual and pastoral responsibilities of the Eton Church towards its parishioners had increased manyfold.

The Eton Wick History Group is most grateful for the kind permission given by the Eton Wick Methodist Chapel to republish this history on this website.

The Acknowledgements, Sources of information and Foreword by Ray Rowland can be found by clicking this link.

The My Primitive Methodists website has an article about Annie Tough.