On the 16th September 1998, the Eton Wick History Group heard how, at one time, four of the farms in the village were farmed by Tenants. Peter Tarrant, who worked not on a farm but at the Airport, was the guest speaker - he had spent much time researching his family's history and was able to tell his audience that his family had been associated with farming since the late 18th Century. The origin of the name 'Tarrant' was De Trent' (c.1100); and early Christian names were often Reginald and ralph. His family tree diagram clearly showed links between the various Tarrants. 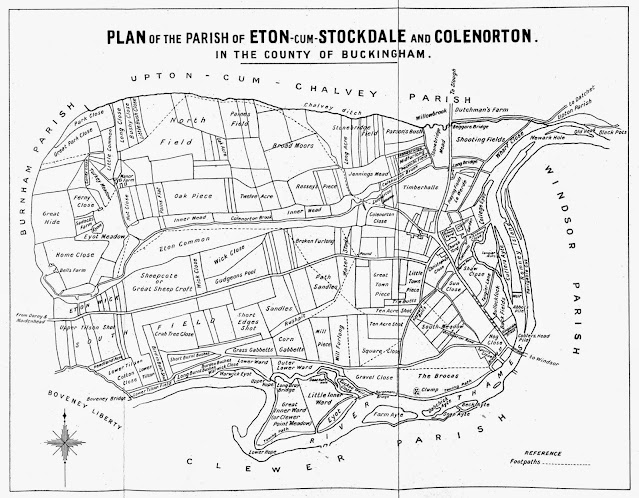 It was most interesting to see maps showing the original layout and names of fields in the area, and to see 'turn of the century' photographs of various farms and cottages and compare them and their surroundings (many Elm trees then) with the way they look today. There were photographs of haymaking in the 1920's; and how nice to see the beautifully thatched round ricks; to see the old threshing machine by the Dutch Barn (in 1948) when the threshers would move in at the appropriate time and sleep in barns wherever they happened to be working. To the non-farmers in the audience, it was perhaps a surprise to hear that, in the past, every tenant farmer had to scour his ditches by 30th November, hedges had to be trimmed or layered by 1st November, animals had to be branded (no substitutes allowed), and farmers were allowed to grow 5 acres of turnips in every 20 acres they farmed.

We all know now about the Hayward - he was paid 6d. when the cattle were turned out (apparently not until after 6.00 p.m. on 1st May each year) and 4d. per week after that, and no-one was allowed to stop the cattle from grazing. There were about a dozen dairy farmers up until the 1930's and we heard tales of cattle eating wild garlic and subsequent complaints about garlic-flavoured milk!

Mr. Tarrant was able to outline the history of many of the farms in the area; and not just the farms but also the tracks which run through them. For example, the one from our Common Road through the fields to Common Lane at Eton is called 'The Meads'. If you follow the Meadow Lane track right through to Boveney - where it reaches Boveney it is/was referred to as a turnpike.

During the War, prisoners of war used to work on farms in Eton Wick; and, as a reminder of those times, Mr. Tarrant had brought with him some memorabilia including the head of an anti-aircraft shell, part of an incendiary bomb and some brass cannon cases. He described the posts and trenches in the fields - constructed to prevent glider landings.

We saw pictures of the 1947 floods and the severe snow of1963; and heard about Bob Bond's haystack burning down; and the barn which was blown down in 1987, which was also when the roof was blown off Mr. Tarrant's father's cottages.

Then there were the chickens; Mr. Tarrant senior had bred chickens for show as well as for egg production - specialising in Buff Orpingtons and Silver Lace Wyandottes. The final photograph was a beautiful sunset - seen beyond some Elm trees.

Frank Bond thanked Mr. Tarrant for his fascinating talk and highlighted the 9th December meeting when each member is asked to bring one item of interest for a 'MEMBERS' EXHIBITION'. The Committee invited suggestions for the 1999 programme.

During the 1990's the Parish Magazine of Eton, Eton Wick and Boveney reported on the meetings of the Eton Wick History Group. A member of the audience took shorthand notes in the darkened hall. This article was published in the November 1998 edition.