A fateful day, Belgium, Holland and Luxemburg invaded by superior German forces capitulated.  The war situation was grave. Neville Chamberlain, the Prime Minister resigned in favour of Winston Churchill who formed a Coalition Government. His broadcast message to the people of Britain emphasized the seriousness of the situation with his words, "I have nothing to offer, only Blood, Toil, Tears and Sweat".

Defence of the British empire against possible attack from enemy forces necessitated sending troops to the middle east, India and the colonies leaving the home defence force weak.   The threat of landings from German parachutists to engage in sabotage was real.

To supplement the Home forces, War Secretary Anthony Eden, broadcast an appeal for men aged 17 to 65 to volunteer as local defence volunteers.   This force, first known as the L.D.V., was renamed in August 1940 as the 'Home Guard'. Volunteers from Eton Wick joined the Eton - Windsor platoons.  No equipment or uniforms were available, but one volunteer recalled being given a white arm band with the instruction to put a finger into a tin of boot blacking and to mark the letters L.D.V.  Everything was lacking except the blind enthusiasm of the volunteers. Within two weeks of this call to arms Belgium and Holland had been occupied and the allied armies were starting the evacuation from Dunkirk.

LDV volunteers were quickly formed into organized units by the county territorial army units. Patrols of the local commons, guarding public installations and manning local defensive positions against the expected invasion were undertaken with early enthusiasm. Available firearms were mainly privately owned shotguns and one or two sporting rifles.

Memories of training sessions, taken on Sunday mornings, are still kindled by the television show Dads Army.  Old soldiers became the NCO’s and took charge of training the volunteers. Retired army officers took command as they were recalled to duty. Reviewing the locally formed units on the Aspro Sports Ground, Bath Road, Slough, one oldish Col Blimp is remembered by one volunteer as thus:

"He made a speech urging that when the Germans came, as surely they would, the LDV would use their bamboo poles to shove up the invaders jacksies.  All good stuff to us untrained but eager second line of defence volunteers. Later when trained in military discipline we looked back on Colonel Blimp, or whoever he was and wondered why he had not told us the Germans may have objected to this ungentlemanly like form of combat.  We took our turn at guarding Slough by night, our depot being at Tunes Engineering. Our key role was to defend the Dover Road bridge that crosses the main railway line to Reading and Bristol on the Trading Estate. For this guard duty the platoon had three or four rifles issued and perhaps a little ammunition but none was available for practice in those early days of the L.D.V. Weeks later I often stood on that bridge and watched the fires and searchlights in the 1940 London Blitz" - (Frank Bond)

Special units such as the Upper Thames Patrol with their own distinctive U.P.T. cap badge were formed to guard strategic areas along the river Thames. Formed into three sections the local U.P.T patrolled Old Windsor to Romney lock (D1), Romney lock to Boveney lock (D2) and Boveney to Bray lock (D3). The defence of the North bank became the responsibility of Lt. Colonel W.R. Colquhoun, Commanding Officer of the Eton College O.T.C. (Officers Training Corps).  The College O.T.C. Cadets took an active role in training the newly raised local Home Guard units. With the use of rifles from their armoury the cadets, with great patience, trained enthusiastic older men in marksmanship and fieldcraft. As there was a real possibility of enemy agents being dropped by parachute river patrols were instituted. The patrols of twelve hours, commencing at 8pm, were undertaken by a NCO and four men, one of whom was a professional boatman, using the motor boat named Topsy.  Many a night was spent inspecting the moored boats and their crews identities, as well as the locks. Patrolling the riverbank on summer evenings could be hazardous, no Germans but swarms of midges that rose in clouds to dance around, irritate and bite. Across the towpath approach to the locks the LDV patrol occasionally laid a trip wire arrangement to give warning of approaching friend or foe.  This method of defence was also a source of amusement whenever an entrapped late-night courting couple found themselves challenged by an unseen sentry.  To test the capability of the UTP defence, exercises were held with the Guards regiment from Windsor Victoria barracks acting as the enemy.  On many occasions the Upper Thames Patrol were the victors due to their local knowledge of the river and its environments.

Buildings and locations were put to uses other than their original purpose, some for the needs of war, some for personal pleasure as follows ……….

Mr. King, the Boveney lock keeper, being a Naval Reservist was recalled for service at the outbreak of war.  His replacement was Ron Sparman. Ron, a Windsor man, did not live at the lock cottage but returned home each evening. With no one to deter them, village lads and evacuees were able to utilized the lock as a swimming bath on the hot summer evenings. Whereas the Scout hut, then situated at the Wheatbutts, had another part time function other than Eton Wick scout headquarters by also becoming the headquarters and meeting point for Eton Wick Home Guard Platoon. 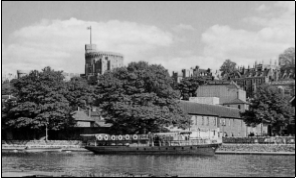 The Royal Navy with the help of many privately owned small boats began the evacuation of the B.E.F. from the Dunkirk beaches. Taking part in this naval epic was the ‘New Windsor Castle’, a well-known Thames steam launch built in 1923 and owned by Messrs. Jacobs of Thames Hotel Windsor. She was called up as part of the Emergency River Transport Service when the heavy raids commenced on London and she was one of the twenty similar passenger boats among the 665 small craft assisting in the evacuation.  Having been taken to Sheerness by her Captain Mr. Arthur Pickin, she crossed the North Sea with a Royal navy crew.

During the following days until June 2nd., 338,226 allied servicemen were evacuated to England. The situation was serious as the B.E.F. had lost or destroyed most of their equipment. British forces sent to Norway were also evacuated during the month again suffering severe losses of men and equipment. Replacing this equipment placed extra demands on the armament factories. A seven-day working week, with a twelve hour or more working day became the norm for many factory employees. Servicemen with engineering skill were sent to the hard-pressed factories to help. Forgoing their games 150 boys from Eton College made themselves available for work at factory or farm. The manpower loss suffered by the armed forces was met by raising the conscription age to include men of 36 years.

Winston Churchill, the Prime Minister, on giving the House of Commons his report of the perilous situation declared with stirring Churchillian words,

“Let us so bear ourselves that if the British Commonwealth and Empire last for a thousand years, Men will say, This was their finest hour".

Because of the grave war situation, the school Whitsun holiday was shortened for both L.C.C. and Eton Wick schools. Upon returning the children received emergency drill instructions upon which to act in the event of an air raid or invasion. A designated classroom with sandbag blast protection was the assembly point and shelter. Children and teachers wearing their gas mask practiced their ARP drill several times during these days of uncertainty. Later, following an inspection by county A.R.P. officers, the head teacher was informed that the roof of the building was vulnerable and not a safe place for ninety children. An appeal to the Eton U.D.C. for school shelters was referred to the Bucks County Education Committee with no immediate result.

Parents who had taken their children back to London during the phoney war period were again urged to evacuate them to safety. Posters issued by the Ministry of Health aimed to persuade mothers to leave the children in safe areas also available for parents were special ‘visit to evacuee’ cheap day rail tickets. Arrangements were made by Windsor and Eton authorities to receive another one thousand evacuees, Eton and Eton Wick being asked to make available two hundred billets. Billeting Officer, The Hon. Mrs. Butterwick and her staff now experienced difficulty with many householders in finding voluntary billets. It became necessary for the council to remind householders that they had the legal power under the War Emergency Acts for compulsory billeting where homes had the room. Being away from their family in a very different environment made it difficult for some evacuees to settle causing upset in the foster home. To help this situation a proposal was put to the council that a house should be purchased and staffed for these difficult cases. This was decided against due to the cost and administration of the project.

With the declaration of war, Eton Urban council encouraged residents to purchase their own air raid shelters. Six Anderson type shelters had been acquired for display, but residents showed little interest. The now changed military situation and the possibility of heavy air raids brought an urgent demand. Having recently sold the six display shelters every endeavour was made to acquire more which was unsuccessful as the more pressing demand for weapons had made supplies difficult. Mr. Chew emphasized to the council the need for public shelters in Eton Wick reminding them also that the financial position of many people in the village was such, that they could not afford the eight pounds for an air raid shelter.
This is an extract from Round and About Eton Wick: 1939 - 1945. The book was researched, written and published in 2001 by John Denham.