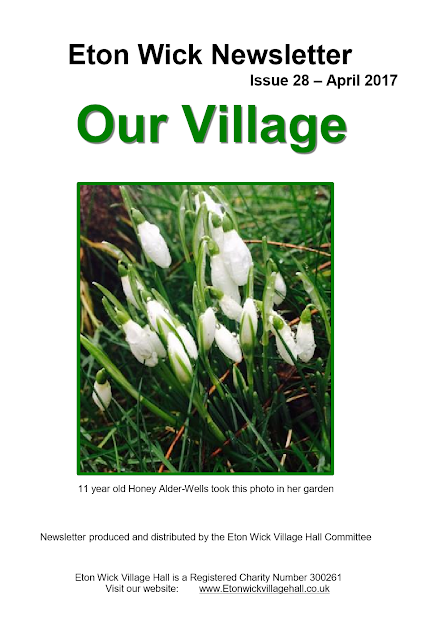 Local Charities and a deadly consequence


Surely many of Eton Wick's senior citizens will agree with me in acknowledging with gratitude the goodwill and generosity of the community and its organisations during the past winter. Some of course depend upon our own participation in happenings or clubs, and even the awareness of our existence.

For me it started with a bag of harvest goodies donated and delivered by Eton College lads and followed by a Christmas tea and Christmas dinner at Bekynton, Eton, by the College and the Eton Charteris Day Centre respectively; another Christmas dinner at the 'Greyhound' pub by the village Over 60's Club,' and the Rotary Club provided a car driven evening trip to Squires Garden Centre where a band was playing carols, refreshments were free; and each of us given a card with cash to spend.

Villagers kindly donated 'shoe box' packages of goodies which were delivered by the village scout movement, and then came vouchers from the Pote, Benwell and Simpson Trust and Eton's Baldwin Bridge Trust. The vouchers were to be redeemed at the village grocery, Eton's grocery or pharmacy. (Some details of the afore mentioned trust fund I find so interesting that I will try to impart some of the facts in this article.) The village school invited 'seniors' to their Christmas functions, and undoubtedly there were other welcoming activities by the three churches and organisations. In this era of 'always in a hurry, with no time for involvement' it is right to acknowledge this abundance of seasonal kindness.

To the best of my village memories of years before WW2 there was very little such generosity apart from the Baldwin Bridge Trust and immediate neighbours. Outpourings of goodwill were perhaps toward the young, and this mostly through Sunday Schools or choir. For a few years from 1955 some boys from the village Youth Club collected wood and chopped up logs for delivery to the older residents. This was still at a time when central heating was not available to all, and with most homes having open fires. One year. over 11,000 logs were chopped and delivered, and letters of 'thank you' received sixty years ago are still around. This received public acclaim, and the club was awarded the Saturday Hospital Fund Cup. Club girls were always on hand with cups of tea for the workers. Eton Urban Council and the College notified the club when tree boughs were available, but this was expecting too much when they said a large elm had fallen at Black Potts (Datchet Road). A few years later the Youth Club was delivering Christmas goodies to some of the village veterans, causing one to reflect that since the mid 1900's there has often been a generous giving.

Returning to Pote/Benwell/Simpson Trust it is perhaps necessary to reflect on circumstances of long since past, and the early years of the Baldwin Bridge. There is no evidence to my knowledge of why it is known as Baldwin's or Barnes Pool Bridge. History tells us there was a bridge in Eton hundreds of years ago. The  place of Eton had water courses from and to the Thames, and the road from the north (now Slough); although only a muddy track, had to cross those water courses to get to Windsor. Originally bridges were of wood and needed constant maintenance, as of course the muddy tracks did also. Today the unfamiliar may well ask where is the bridge; or perhaps observe that it seems an elaborate bridge doing very little. Not so, as it spans a substantial stream, or 'rivulet', that left the Thames just west of the Eton Brocas, flowing up Meadow Lane, where it is now piped under the road; and on through Eton's Barnes Pool; and back to the river.

With today's lower water table, and much silting, the flow is not what it once was. Even in my time as a pupil of Eton Porny School in the 1930's, the Headmaster often gave a seasonal warning of not being tempted onto the ice covered pool to retrieve coins that the College Boys tossed on to the ice In the hope of seeing a few soakings. Upkeep and repairs to the bridge have depended on a trust fund that, through much generosity and legacies, established properties that produced a regular income. Bridge maintenance is the prime concern of the Trust, and in times of a surplus income, other deserving Eton causes have been generously financed by that Trust through its twelve local trustees, chaired by their elected Bridgemaster. In the 17th century a brick structure replaced the oft repaired wood, and in 1883 this was duly replaced by an iron bridge.

Now the Pote, Benwell and Simpson Trust. Just as those early bridges needed constant attention, so did the highways. Without national financial support the responsibility for maintenance was always a local one. Again this needed generous support, and invariably more than was given, until slowly a series of what came to be known as 'Turnpikes' were established along stretches of major roads. All highways had become in a terrible state and in the mid-16th century an Act was introduced requiring all parishes to maintain their section of the roads with obligatory labour of four to six days for all male residents, using their own tools, carts and horses as necessary. This was not a satisfactory scheme, and about a hundred years later the first 'Turnpikes' were sanctioned. In practice this required a number of wealthier persons forming a trust and having the authority to improve and maintain a particular stretch of road and to charge for the use of that stretch. It perhaps took decades for an entire highway to become covered by the Turnpiked lengths. The Bath Road from London had its first turnpike in 1707 but it was 1756 before it was completely extended.

Our story concerns the Colnbrook Turnpike Trust that was the fifth of twelve Bath Road Turnpikes. It was first sanctioned in 1727 and was responsible for the road between Cranford and Maidenhead Bridge, passing through Slough. After becoming established they were persuaded to undertake extending their responsibility, to cover the Slough to Eton road. Among the Colnbrook trustees were Joseph Pote, a local antiquarian bookseller and Joseph Benwell a draper. Both men were of some standing as Baldwin Bridge trustees and either had or would be Bridgemaster (1783 and 1762 respectively).

The Colnbrook Turnpike held regular meetings at one of a small number of inns and customarily concluded with a dinner, which some may think was a feast. In March 1773 the meeting was held at an inn by Slough's Salt Hill. The meal starting with soup, then fresh water fish of pike, perch and eel, fowl, bacon and vegetable, cutlet of veal, pig's ear ragout, mutton and salad, lamb and cucumber, crawfish, sweet, Madeira wine and port. Apart from Joseph Pote all the diners were taken ill and within a few days at least six had died. At the start of the meal Pote had absented himself because he disliked turtle soup. Some unsavoury characters had been present and it was concluded they had somehow transmitted the cause of the illness and death. Joseph Benwell was among the deceased, and in his will was the bequest of £150 to the poor of Eton. Joseph Pote survived another thirteen years and his will added £50 to that of Mr Benwell, expressing that bread be given to Eton's poor on two specific days of the year. The first being March 29th; the date of that fateful dinner; expressing his wish that praise to the Almighty be chanted in gratitude for his good fortune in 1773. Years later a woman on her deathbed confessed that she had been the wife of the inn keeper at that fateful time, and that a chef from London had been hired to make the turtle soup which he duly did overnight, intending to let it slowly simmer for those hours. Unfortunately he fell asleep and on waking found the fire out and the soup cold. He re-kindled and restored the temperature, but alas the pot was copper and acids had formed a verdigris. The tragedy was not the fault of unsavoury dropouts and even Kings can get it all wrong at cooking, or so we are told of King Arthur and the cakes. The Pote, Benwell and Simpson fund includes a recent donor, Bernard Simpson, again an antiquarian book seller of Eton High Street.

Today's generous shop vouchers bearing the names of the Pote, Benwell & Simpson Trust together with that of the Baldwin Bridge Trust is obviously much supported by the latter trust.