THE MAKING OF OUR VILLAGE 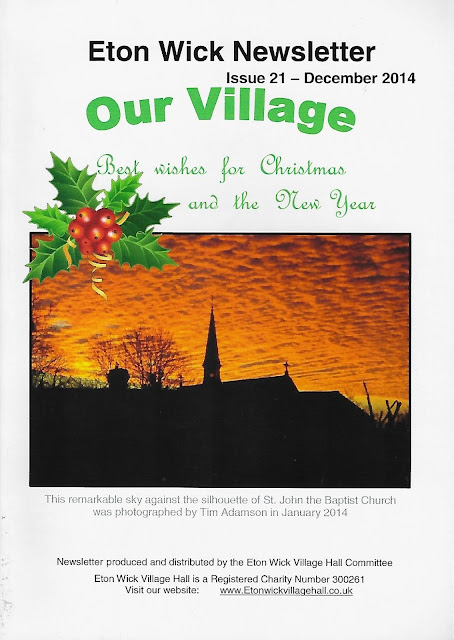 There are so many changes in a lifetime and it would not be easy to say which change has been the biggest influence of our life. It is so easy to think of advances in technology, travel and medicine, but socially perhaps education is the strong contender. Like most of my village contempories I left school when fourteen years old, and having been given the basics; proceeded to teach ourselves with experience and pursuit of personal interests. Today the extended years of schooling; often followed by university, has resulted in so much of the communities' youth leaving the village to establish their own way of life. Does that matter? It does in as much that no local young folk take over, or help to build on our established organisations.


Against this it must be admitted that many of the village's keenest workers were not local by birth or youth. This is not just a recent phenomenon. In an earlier issue I wrote of that great village benefactor, Edward Littleton Vaughan. In the early 20" Century years before WW2 he gave so generously of himself, and his money to Eton Wick. He bought two houses here, but probably never lived in either. The only dwellings built by the Council in the 1930s were the bungalows and houses we know as Vaughan Gardens; almost certainly an acknowledgement of all this Eton College classics master had meant to our village. Yet 'Toddy' as he was generally referred to, had never been a local boy. Apart from Bunce's Close, that was accorded its name; having been built on Harry Bunce's farm land of earlier years; and Bell Lane and farm that probably took its name from the Bell family who farmed the area during the 1681 and 17" Century, I can think of only two other places in Eton Wick, one a road and the other a hall, that were named after people who served the community well, yet neither had been villagers before they were adults, and almost certainly neither knew Eton Wick even existed before they were married. One was Annie Tough (nee Moore) and the other was her father John Moore; and it is from these that we get the Tough Memorial Hall and the name of Moores Lane. Who were these two people, who came to mean so much to our village and to that part of the village not even developed at that time?

We have previously read about the needs of Eton Town and College; by the mid-19" century, to improve their sewage disposal which had resulted in their purchase of the vacant Bell Farm in Eton Wick, to which they could pump the sewage. By 1870 this was in place, leaving the Authority with much farming land surplus to the sanitary requirement. The farmland had been part in old Eton Wick village and part in the Parish of Old Boveney. For the service of Eton, the sower plant was established in part of the Eton farmland boundary at Eton Wick. Previously Bell Farm had enjoyed the grazing of lammas designated ground, but now having used lammas land they owned, for the sewage plant, they were obliged to forfeit the lammas right to graze a like acreage elsewhere in the Eton Parish.

There was still a substantial farm area, and Charles Tough of Rotherhithe, Kent was appointed manager. At about that time; 1870; several acres of the farmland across the boundary and in the Boveney Parish, was sold. Within a year or two this agricultural holding was acquired by Mr James Ayres, who seeing the shortage of building sites in Eton Wick village, parcelled-up the land, plot by plot, with provision for new roads of Alma, lnkerman and Northfield.

It was 1877 when Charles Tough arrived at Bell Farm and with him his young bride age 24 years, Annie (nee Moore). In their wake came Annie's father. John Moore, with four of his twelve offspring. Presumably all from Rotherhithe. Mrs Tough was an ardent follower of the Methodist Church, but found no such building in Eton Wick. In fact the village had only had its C of E Church, St. John the Baptist, for about 10 years (1866/7). Non-conformist services were held in a farm building by the Wesleyan Society, and later by Congregationalists c.1840s; and the C of E had held non sacramental services in the old school before their church was built. Anne probably saw this as more a challenge than a help. She became accustomed to walking to Windsor town's Methodist services on Sundays and of course walking home. A long walk in many weathers, but it was forty years before a bus service, and what we consider a shorter walk along the river banks would not perhaps have been so inviting when the towpath was just that; a muddy or dusty well-trod path for teams of large barge horses. We may think Mrs Tough would have accepted the status quo of one Sunday service in Windsor, and if more were needed, to use the C of E church. She was young, a newly wed, with a lovely old farm house to establish home for herself and Charles, but it would appear not all that Annie wanted. By the mid-1880s plots along Alma Road were being built on; some single houses; some semi-detached and others terraced.

Annie really wanted her chapel here, and without the necessary purchase money apparently appealed to Mr Ayres' generosity. Eventually Ayres reputedly said 'I'm hoping to sell two plots, and if this goes ahead he would give her a plot's. Could he have been negotiating with Annie's father. John Moore? About this time John did buy at least two substantial plots on which he had the terraced row of six dwellings known as Primrose Villas, and opposite, a shorter row of houses - Snowdrop Villas built. When the promised plot was given to Mrs Tough it was with the alleged remark For your perseverance. There was a four bedroom house built several plots east along Alma Road for a Mr Howell. He named the house 'Perseverance Place. Perhaps only coincidental, but I may be missing something here, and the obvious has escaped me.

A word here about Perseverance Place. Forty plus years later it was the home of Mr Harding and his family (1929) and the Uxbridge Gas Company Depot of which he was branch manager. In 1936 Mr Harding was asked if he could accommodate the village's district nurse whose home at the thatched bungalow in Wheatbutts orchard was no longer suitable, being without a bathroom or 'phone line. Perseverance Place was one of very few in the village which had both.

Twenty years on, and after WW2, Dr Harcourt of the Windsor surgery held three clinics a week in that house. It was demolished c1970 for part of the Bellsfield Estate.

Annie had got her plot, but then of course needed to raise the three hundred pounds to build the chapel. The chapel site that was given to Mrs Tough had a narrow frontage and would forever give the appearance of having been squeezed between Primrose Villas and houses east.

Thanks to Annie's determination and drive, Alma Road got its Primitive Methodist Chapel in 1886. This same purpose saw her cajoling a congregation, and leading a determined drive with the village Temperance Guild. Many may well have said she epitomised all that was the chapel. She died in 1930, and within a few years an extension was added to the building and named 'The Tough Memorial Hall'. In 1932 the prefix 'Primitive' was removed, when the various Chapels became nationally united. We have seen that her father John Moore was responsible for the building of the two terraced rows in Alma Road, and for the end house of Primrose Villas abutting to the lane. (to later take his name) he had a slightly more distinctive front. This was to be his home. He had obviously been a determined and successful man in Kent, and was not hesitant to proclaim it. He wrote to the Rotherhithe press proclaiming his achievements in his new home at Boveney New Town. He was the first Highway Surveyor, School Governor and Chairman of the Boveney Council (as with Eton Wick, both had their own six person councils 1894 - 1934) the first Councillor; Guardian of the Poor and promoter of local allotments, and so it went on. He even claimed to be the first person to use a Post Office Collection Box in Boveney New Town.

By today's' thinking perhaps a little 'over the top', but it all happened over one hundred years ago - four generations - and attitudes and standards are very different. Certainly John Moore did achieve all he wanted recognition for. He was very generous within the New Boveney community and very supportive of Annie's endeavours for the chapel. At one time even purchasing a harmonium for the services. This was a very now area, and his organisational ability was undoubtedly a great asset and Inspiration to others. John Moore died in 1911; about fourteen years before his son-in-law, Charles Tough. There is no evidence of Charles ever becoming involved with his wife's abiding interest in the Methodist cause or services, but he was very supportive of all Annie did.

Most things in life have a downside if you look for it, and as a lad in the 1920s and 30s I did think the Chapel polarised the two communities to a great extent. Most of my 'contempories' living beyond Bell Lane were Chapel goers and those in Eton Wick were C of E. Each had a strong Sunday school and in consequent, Sunday school outings. I must say though that the Chapel youngsters saw the seaside for at least two summers while we at St. Johns' still had to be content with Burnham Beeches. Alright in the 20s when horse and cart was the transport, but come the coach era we yearned the longer ride. With daily bus rides to and from school, I guess today's youngsters would be attracted to nothing less than a flight or cruise. Thankfully Annie's endeavours for a Chapel are still much in evidence in today's' much changed village.