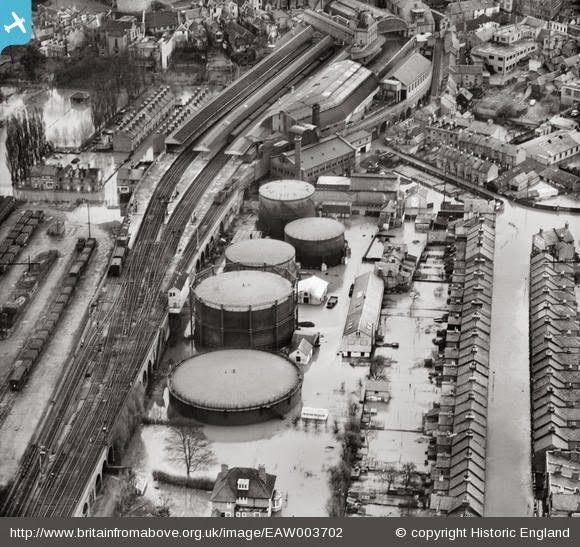 There was a large sign on the roof at the back of the house proclaiming it to be the 'GAS COMPANY'S DEPOT'. You could see it right across to the 'Shepherds Hut ‘and the Eton Wick Road. It became our address, as it was easier to spell than Perseverance Place. Gas had arrived in the village in 1914. It was supplied from Windsor Gas Works. There was an arrangement between the Windsor and Uxbridge companies to supply the gas. Eventually gas was supplied entirely from Slough, but not until the introduction of North Sea Gas much later on.

The majority of households only had gas lighting in the downstairs rooms. At that time, most people had gas cookers although some people retained the old coal fired kitchen range. Other appliances such as gas fires, water heaters, wash boilers and refrigerators were practically non-existent. During the early 1930's gas street lighting was erected in the village. There was a total of forty four lamps erected, in addition to the one lamp outside Perseverance Place put there earlier, courtesy of the Gas Company. The area covered the whole village from The Slads to Dorney Common gate. One of the fitters, usually either Fred Harris or Bob Williams was paid a quarter of an hour overtime each night to ride his bike around the village at lighting up time to see that they were all alight.

There appeared on the scene a two wheeled hand cart just big enough to carry a gas cooker and its attendant fittings. It was Dougal's job to push it and deliver any new equipment that could not be carried on a Bike. Anything larger, Harry Prior's horse and cart was pressed into service. 'The hand cart became known as the Truck, and so it always remained until it disappeared sometime in the 1950's. Another article of transport was the Barrow. This was a resplendent polished wood two wheeled hand cart not unlike a Post Office parcel barrow. On the sides was printed in Gold Leaf the company's name. It was kept in the offices of 'Hetherington & Son’ in Eton High St. Once a quarter the barrow was used to 'COLLECT THE METERS.' Hetherington'& Son were contracted for this.

The job entailed Fred Warner, a retired policeman and Gerald Mosley, Hetherington's clerk. Gerald would stand outside and 'guard' the barrow while Fred went inside with the 'BOOK' and a large Gladstone bag. Fred would empty the meter count the money, all in pennies, pay out the rebate, put the money in the bag and when the bag was full, and transfer it to the barrow. It took about two weeks to collect the whole area.

Hardly Sunday lunchtime went by without someone came to the door, they had got a penny wedged in the meter and they couldn't get any gas. There must be hundreds of bent pennies thrown in Little Common Ditch.

In the early 1930's Fred Harris arrived, and later on, Bob Williams. John North was taken on , on a temporary basis but only when they were busy. Mains Water finally came, which meant we could have a proper plumbing and central heating system with a BATHROOM!!! The kitchen floor was boarded and the scullery floor Quarry tiled.

My brother was born in 1931 and I went to the village school. The boy's stayed until seven years old, the girls remained until fourteen. I am sure that details of school life can be adequately covered somewhere else in this history.

The motor cycle combination we first had was swapped for a Morgan Three-wheeler. When we went on holiday one year the driving chain wrapped itself around the rear wheel. We went the rest of the way by bus. After the chain episode, a 1929 Morris 8 tourer appeared. It had a torn roof, so a new roof was made. It was home made of course, Father had a knack of 'do it yourself'. We couldn't sell the Morgan, so Father raffled it. He made seventeen pounds on the deal, quite illegal of course. Bill Sibley won it, but he had nowhere to keep it.

1935 was the Silver Jubilee Year. Somewhere I still have the aluminium beaker I received from the Home Park celebration. We decided to celebrate by flood lighting the back of the house, with gas of course.

The depression of 1930 was easing. New houses were being built. Among them were Leeson Gardens, Eton Square and Broken Furlong, together with individual houses infilled. 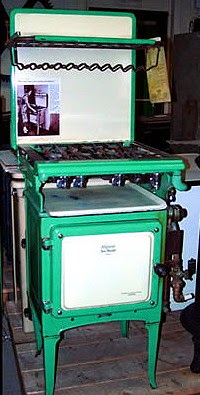 It meant gas had to be run into every new house. Sales of appliances increased. A show room was made from the front of Perseverance Place. Sales were made usually by appointment often after hours. The show room was not manned during the day, except for selling mantels which were sold at the door by anybody. There was a strict rule; they had to be paid for, no tick.

Modern cookers began to be sold. They were of pressed steel and stove enamelled. There was a big push on 'Regulo' cooking, where you turned a numbered knob to get the heat you wanted instead of lighting the gas and praying. The old Victorian cast iron cookers were brought back and sent by lorry to Uxbridge for the scrap yard. The old coal fired coppers gradually fell into disuse, replaced by wash boilers.

The first gas refrigerator appeared; it stood in the showroom as a demonstration model. We kept our milk and butter in it.

Dick Harding's full article has now been published as an e-book by and can be downloaded here.
Posted by Steve Denham at 10:10