Have you given thought to our village magazine; to what prompted its publication, to the work involved and to the support needed to keep it going? 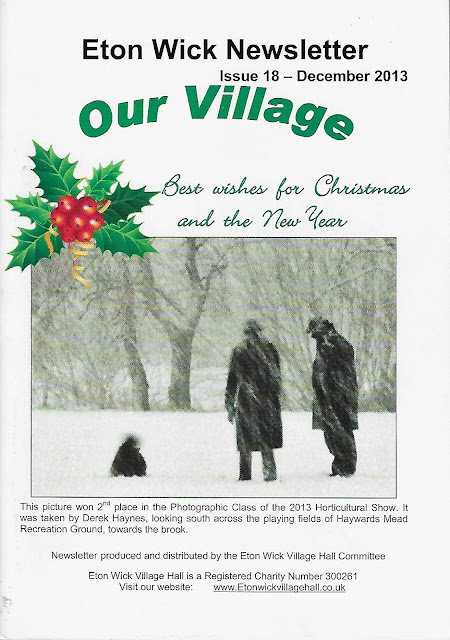 The first issue was in April 2008 and has been distributed to every household in the village, from the railway viaduct to the Dorney Common Gate free of charge, three times annually since. It was the brainchild of the Village Hall Committee and prompted by an original idea in 1949. At that time the Village Hall was known as the 'Stute', being of course an abbreviation for The Eton Wick and Boveney Institute. It was just a brief few years since some state of normality had returned to the communities following an almost 6 years of war upheaval. In 1949 and again in 1951 the 'Stute' committee under its chairman, local builder Jim Ireland, produced a magazine titled 'Our Village' at 6 pence an issue.

They were produced on a duplicator and hand stapled together. The two issues, although quite 'tatty' in today's comparison, are surely now very collectable. The second issue has adverts for most of the then new council built shops to open in 1951, along the top of 'Meux the Brewers' Field, adjoining The Shepherds Hut public house. That issue also contained an article on Bell Farm, submitted by Mrs Smith, the wife of John, who was the Eton Urban Surveyor and responsible for the layout and design of the early post war council housing in the village. Mr & Mrs Smith lived in Bell Farm for several years. Here is the article:

Bell Farm — Modern discoveries in our village — Do you know that in your own village of Eton Wick you have one of the oldest buildings in Buckinghamshire?

Built around 1360 Bell Farm still retains most of its original structure inside a comparatively modem front. The original beams and arches are still in a wonderful state of preservation. According to its history two rooms were added on the North side in 1580. Although covered by several coats of paint, gentle scraping reveals fine old oak panels mellowed by time. It is in the lower of these rooms, known as the parlour, that our most interesting 'find' has been revealed. For the past two years there have been falls of what resembled builder's rubble down the chimney, and when strong smells of something burning had been haunting the house for a month or so we decided to investigate. So one evening, having removed the furniture and rolled up the carpet we removed the broken Victorian fireplace. Result — clouds of dust, loads of bricks, birds' nests and soot. When the dust finally subsided there was a lovely Tudor arch, the original, in a miraculous state of preservation.

So yet another example of the wonderful craftsmanship of the past has come to light and the arch forms part of our repaired fireplace. When the room is entered the light falls on the bricks which have retained their delicate colouring for the past 370 years, and are still a joy to look at in 1951.

Frank Bond recalls discussing Bell Farm and the 'Parlour' room with Mrs Smith some 50 or 60 years ago, and suggests she may have been careful in her article respecting her Mother's views. Apparently Mrs Smith often felt the presence of 'another' when in the room alone. She never spoke of this to her Mother who was living at Bell Farm.

Come one occasion when Mr and Mrs Smith were going out one evening and Mrs Smith said to her Mother "I hope you do not mind being left alone." Back came the reply "I am never alone in that room, and the presence of another who is always kind and friendly." This helped prompt the chimney disturbance, ever mindful of what they might find.

"I can confirm that neither of my late parents nor I have ever seen or been aware of any ghostly presence, but that the house has always had a warm friendly atmosphere, so if the spirits of previous residents are still here they have never seemed to mind sharing the house with us. There were however some nasty "spells" in the inglenook fireplace when we moved in, indicating some kind of witchcraft perhaps - which we simply burned, but as each of us suffered misfortunes in the years immediately succeeding, I would not discount the power of witchcraft.......

Beverley also advised that according to Berkshire County Council's Head of Conservation in the early seventies, when boundary changes put Eton and Eton Wick into Berkshire, Bell Farm House is the oldest house in Berkshire. (Apparently it was the sixth oldest when in Buckinghamshire). Also. that when they bought the house in 1959, they were told that the two back rooms were added during the reign of Henry VIII (1509 - 1547), not in 1580 as Mrs Smith thought.

The Smiths had told about the 'Parlour' fireplace and it is still possible to see the Tudor arch brickwork made up of tiny bricks, now supported by a modern brick fireplace. There is an equally interesting story about the Inglenook fireplace in what is now the sitting room. Apparently this had had a Victorian fireplace, but whilst it was being redecorated, the Smiths were banging about and realised there was a hollow sound, indicating there must be a space behind it, so they took the Victorian fireplace down and revealed the inglenook fireplace and what was left of the bread ovens. Beverley doesn't think this inglenook was originally in the house but believes she read somewhere that this was added when the house was over 100 years old, so would presume it was originally a mediaeval 'Hall House' with a smoky fire in the middle of the floor of what is now their front hall.

Squirrels recently got into the roof of the Tudor bedroom and chewed holes in the fibre board ceiling. Contractors removing these chewed panels revealed magnificent beams, which also showed that the roof has been heightened at some time. The lower beams had small nail holes in them, indicating that laths had been nailed to these, so there must always have been a lath and plaster ceiling in that bedroom, whereas all the other bedrooms have exposed beams which go right up into the roof as there is no loft. This must mean that the beams in this room have never been exposed. Now that she has seen them Beverley wishes she could afford to have the fibre board removed and expose these magnificent beams.

Our thanks to Beverley Campion for these added anecdotes.