On Their Own At Last.

For at least seven centuries Eton Wick had been administered through Eton. In 1894 this came to an end, swept away by the Civil Parishes Act. The Local Health Boards were ended to and in future the vestry would be concerned only with church affairs. Eton town was created an Urban District and the rest of the parish became the separate civil parish of Eton Wick within Eton Rural District. In spite of the recent ecclesiastical amalgamation, however,  New Town remained part of Boveney with its own parish council.  Meetings were held and some of the confusion that everyone clearly felt was dispelled, but no doubt the people of those days were as sceptical of those of 1974 that the changes were for the better.

Early in December parish meetings were held in Boveney and Eton Wick, and five councillors were elected for each of the two councils.  A few days before Christmas they met for the first time: the Eton Wick Council at Wheatbutts, the  property of its first chairman, and the Boveney Council in the schoolroom of the Methodist Chapel. Although the parish of Boveney included two communities, that is New Town and the tiny village around Boveney church, all the councillors  lived  in  New  Town. The parish  magazine gave the names of the councillors and trade directories reveal something of their  standing in the Wick. 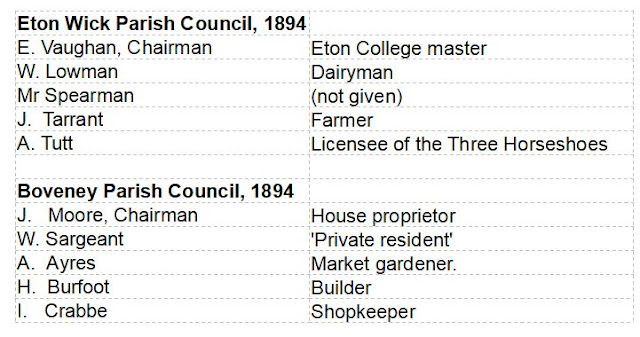 Two matters in particular were of immediate concern to the Eton Wick Parish Council - the  acquisition of more land for allotments and the release of the money given in compensation for the loss of lammas rights. The Great Western Railway Company gave just over £200 when the branch line from Slough to Windsor was laid and the Local Health Board gave £150 when the  sewage farm was developed at Bell Farm. The money was held by trustees: by 1894, with the interest it amounted to almost a £1000.

By the end of the first year both aims had been achieved. Land was leased from the Crown - the acquisition of more land for allotments and their management, rents, fences, pumps and by-laws became regular items on the Council's agenda. The matter of the compensation was not quite so simple. How to use the money for the benefit of the whole parish had been a perplexing question for many years. Many suggestions had been made and rejected because of legal difficulties. Finally the idea of a recreation ground at Eton and Eton Wick met with approval. Eton's ground was in use by 1896, but unfortunately nine years were to pass, and land exchanged between the Crown and the Lord of the Manor, before a suitable piece of ground could be found in the village. At last in 1904 the deeds were signed, site levelled and the pitch made ready for the football and cricket teams.

Much of the work of the Parish Council concerned the upkeep of the footpaths and footbridges and the repair of the gates and stiles leading to the commons . This was not its responsibility, but the councillors acted as watchdogs, requesting, negotiating and chivvying the relevant authorities, usually the Lord of the Manor or the Rural District Council, until the jobs were done. The cleansing of the Common Ditch (the brook which runs along the north edge of the common) and the removal of refuse came into the same category, and the village suffered while the authorities dragged their feet. The Council acted as watchdog in another important matter, the use or rather misuse of the commons. It is clear from the Minutes that there was not always a Hayward and the rules were frequently not enforced. On three separate occasions in the life of the Council (1894-1934) it joined forces with the Eton Urban Council requesting the Lord of the Manor to hold a Court Baron in an attempt to ensure the better management of the commons.

A committee of parishioners was even formed to report on irregularities and it is easy to imagine the mixed feelings which this must have engendered! The Council were on watch for the violation of the lammas rights even to the extent of going against the national interests in the time of war when , during World War I, they continued to forbid the building of pig sties on the parish allotments. Several were built and ordered to be pulled down. Mr Vaughan, still the chairman of the Council, was not wholly in favour of so strict adherance to the rules, and offered the use of a boar to those villagers who, in the past year, had been keeping pigs in their own gardens. No doubt his offer was gratefully accepted and resulted in one kind of litter that could meet with approval - at least while patrotism was stronger than the smell of pigs. Some time after the war the rules were changed and later Minutes record permission to build pigsties and chicken houses. By the time the Ordnance Survey mapped the village again in the 1930s there were dozens of sties to be marked.

Through all the forty years that the Council existed it was hampered by a lack of funds, since a rate of twopence in the pound brought in little more than £20, and even in those days this was a very small amount. In consequence the Council decided in 1895 not to adopt the Lighting Act, or to pay an extra Hospital Rate to the Eton Urban District Council so that fever patients from Eton Wick could attend the cottage hospital there rather than the Rural District hospital at Cippenham. Years later, when there was a suggestion that this hospital should be extended, the Council voted against the motion, once again the deciding factor was the cost. The question of main drainage and a scheme for refuse collection were brought up several times, but each time discussion was terminated because of the 'prohibitive' cost. Perhaps it was really true for many of the villagers were poorly paid and out of work for at least part of the year, though quite certainly there were more than a few people who believed that what was good enough for their fathers was good enough for them. The most that could be achieved was to see that the RDC Inspector checked the individual cesspits and the Common Ditch and its ponds were cleaned regularly. In the 1920s Mr Vaughan gave a small piece of land behind the Village Hall for use as a rubbish dump for both Boveney and Eton Wick, but refuse still continued to accumulate in a huge mound on the common is scavenging scheme, but this could never be a complete solution to the problem.

In 1902 the Eton Union Guardians wrote to the Council asking its views on the subject of secondary education; but even in this matter the Council were still mindful of costs and replied that their opinion it would not be sufficiently advantageous to the inhabitants and they the (did) not feel justified in advocating the proposed rate in the parish for the support of the school'. In retrospect it is well that the decision was not finally theirs to take. In other matters the Council was more positive in its actions. A small mortuary was built in 1913 on the edge of the common in place of the shed beside the Three Horseshoes which had been used for the same purpose. Drownings were not infrequent, and several elderly gentlemen can still recall the delicious horror of peering through the chinks in the shed when it was known that a body was inside: Incidentally the inquest was often held in a room at the Greyhound. Over the years provision was made for fire fighting beginning with the purchase of a hose and reel in 1912. Messrs Burfoot and Harman immediately offered the use of their telephones (probably the only two in the village) to summon the Eton Fire Brigade, and notices were printed to this effect. The services of this voluntary brigade were free, but a charge was made for out-of-pocket expenses and any damage to the engine. The bright red engine with its brass gleaming was a magnificent sight when pulled at full gallop through the village. All of this is just a memory, but the ladder, protected by a narrow roof, was bought about the same time and can still be seen on the west wall of the post office.