Our Village December 2012 - The way things were - from Memory Lane 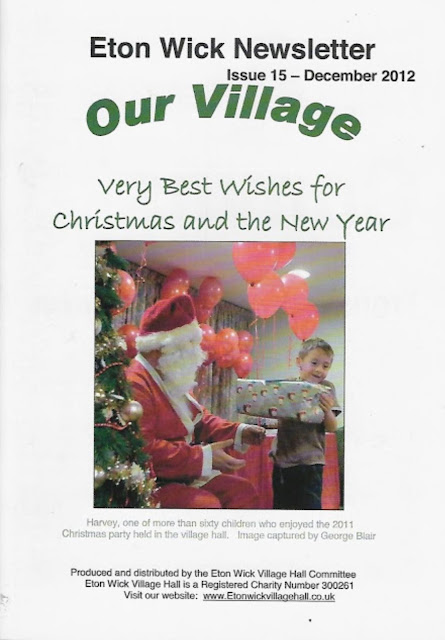 It was a warm sunny day in August — yes we did have a few — so I decided to stroll to Common Road where I could sit in the shade of the 'Victoria' oak tree. This was home from home to me as I had spent my first 29 years; apart from five years of war; in an old house exactly adjacent to that tree.

I sat alone, and with few passers-by, I really did go down memory lane with the ghosts of long departed neighbours drifting in and out of my thoughts. On similar sunny Sundays, during my childhood, my father had sat there in the shade of the tree enjoying a cup of tea and chatting to Jack Newell, the village blacksmith. They sat on the grass, but I used the seat dedicated to Jack's daughter, Jennie, her husband Allan, and neighbours Maud and Ivor Rivers. Many villagers will need no reminding of Jennie and Maud's stupendous efforts raising funds for charitable causes.

How much neater and tidier Common Road is today, but apart from an enlarged Wheatbutts Cottage; Dairy Farm House and the 'Greyhound' public house, most else has gone; to be replaced with more modern dwellings. Hope Cottages are still there, but bear little resemblance to the earlier days when unsightly backs, outhouses and toilets cluttered the view along Common Road. Many were still using bucket toilets, as the main drainage did not arrive until around 1940. The pond too was neglected and silting up. Even so, as children (we never said kids in those days, as only goats had kids) we got much seasonal pleasure on the pond with old bath tubs, fishing, and in winter, really good ice slides.

Many homes had a pail for the family food waste, vegetable trimmings etc., smelly perhaps, but many chicken and pigs were kept by householders, and farmers gladly collected the swill from the 'pig bucket' as they were called. Dairy Farm had pigs, as did Ted Watson who farmed from Wheatbutts Cottage. In fact most of the farms and some householders kept pigs. Jack Newell also had several on his blacksmith ground holding. Around the area now occupied by the Albert Place flats; the lammas Hayward, Mr Pass; who came to Eton Wick in 1933; bred pedigree and other pigs up to the 1950s and at times had as many as 400 in what was then the Thatched Cottage grounds. His large pig herd was part fed by his regular collection of food waste from the kitchens of Eton College.

During the long period of meat rationing in WW2 it was a great advantage to supplement the meagre ration allowance with home bred pork. Quite illegal of course, as it was a requirement to declare the intent to kill, and then to forego some of the official 'ration'. Not always adhered to, and I know of instances when doors were locked, complete blackout, and family vigilance while the pig was carved upon the kitchen table.

It was very pleasant on that oak tree seat, with reflections of yesteryears and the dear departed, but I was very conscious of how few people were about. One friendly lady encouraged her young lad to wave to me and we were soon having a chat. I concluded the absence of people must be due to the fact that most ladies were out at work.

In my young years the housework was so time consuming, with no washing machines, electric cookers (microwave or otherwise) and the age of 'mend or make do' rather than replace. No school meals and a dependence on a coal fired kitchen range meant very few women went out of the home to work. Consequently the houses were mostly always occupied, and the women living along the streets became very local characters. Until the mid-1930s when contractors R Bond & Sons established a vehicle base off Common Road there were no cars along the road. Apart from Cyril Doe's motorbike and sidecar at Albert Place there were virtually no motor vehicles other than the annual visit to Saddocks Farm by Ward's threshing machine, and an occasional cattle truck to one of the farms. How different now.

Despite the untidy appearance of seventy plus years ago some of today's apathy could be put to shame. Yes the ponds have gone, but the stream is a disgrace, with the large thorn hedges getting ever larger and practically hiding the water course. This is on common land and it is not good enough to say it is no concern of ours.

As a 17 year old, on a lovely sunny September morning, I was on the edge of the pond about 20 metres from where I was now sitting, when my Mother solemnly called me to the house and said "it is 11 o'clock Frank and the Prime Minister is about to broadcast to the nation". Indeed he did, declaring Britain was now at war with Germany. Far more of consequence than the landing on the moon years later.

Common Road was perhaps more fortunate in the coming conflict compared to the Great War of 1914-18. It suffered just one soldier fatality as against eight in the First World War. In fact five of the eight Great War fatalities had homes within fifty metres of the oak tree where I was now sitting and sadly the five included two pairs of brothers. Yes! They had lived out their young lives and played around this spot, albeit two of the brothers aged 20 and 23 years had lived at Dairy Farm within a stone's throw away. They had volunteered, and as I reflected, the short war poem by A. E. Houseman rang through my thoughts.

Another difference is the complete absence of cattle and horses grazing the commons. They were ever present between May 1st and November. Unfortunately of course, the farms and small holdings no longer have milking herds and work horses have long since disappeared. Several households had chicken and ducks which seemed to roam freely although mostly ducks kept to the ponds and the stream. Other roads in Eton Wick that existed in the early to mid-1900's had perhaps similar history to reflect upon, although the Lammas and ponds were peculiar to Common Road. What was once very rural has become more of an urbanisation.