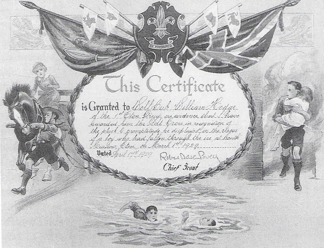 Chief Scout Robert Baden Powell awarded the Gilt Cross and Certificate to nine-year-old William Hodge of the 1st Eton Group on April 17th 1929. While playing on an ice-covered stream in South Meadow, Eton, on the 1st March 1929 Alan Kingston (6) fell through the ice. William and another eight-year-old boy tried to pull him out, but the ice broke under their weight, and they went under also. William continued his efforts alone after his eight-year-old colleague left the scene, and he finally managed to pull Alan out, averting a probable fatality. 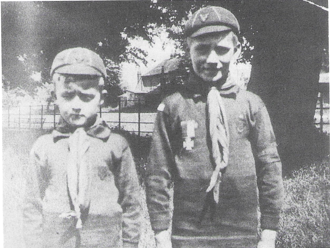 The upper photograph shows the Certificate with Baden Powell's signature, a lower photograph is of William (on the right), with Alan.