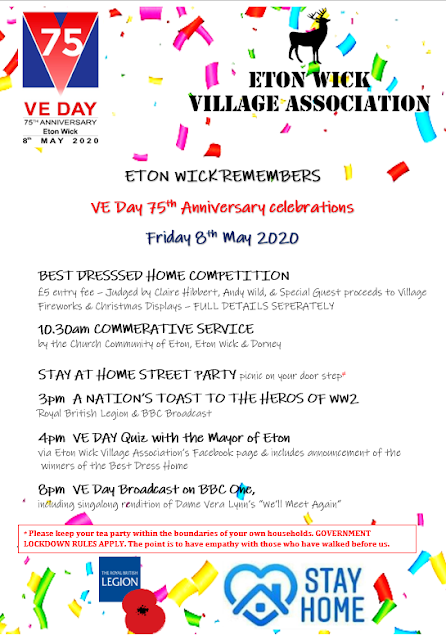 A day long programme of events to celebrate the 75th anniversary of Victory in Europe Day had been organised by the Eton Wick Village Association. Their Facebook page has details.

With the declaration of a two day holiday the nation commenced its celebration with church services which many attended to give thanks for victory and deliverance from tyranny. Flags and bunting appeared on the Tuesday morning in Windsor and Slough giving the streets a look of carnival. Celebrations had started quietly in the early part of the day, the crowds gathering during the early afternoon after the Prime Minister, Winston Churchill, had broadcast to the nation that all hostilities in Europe were at an end. Nightfall brought more people onto the streets to cheer and dance. Bonfires were lit at many places, with the Mayor of Windsor lighting a huge bonfire on Batchelors Acre, Windsor, the signal for the start of celebrations that went on into the early hours on Wednesday. Other hastily gathered bonfires appeared onto which went effigies of Hitler and his cronies. Eton College boys had commenced their celebration of victory on Monday evening when the first news of the surrender was heard.

The use of buckets of water and stirrup pumps by the Boys did nothing to dampen the enthusiasm of revellers who had to run the gauntlet along the long wall and Keate’s Lane. The next day they were given a holiday and immediately set about building a huge bonfire on Fellows Eyot which was lit in the evening. The scene was one of merriment with people dancing around the fire enthused with the excitement of the occasion. As the fire died away many boys linked arms to make a triumphant march up Eton High Street to Windsor where they met another joyous crowd coming from Windsor making their way to Slough. Many of the boys carried on their celebrations with a triumphant march over Windsor Bridge to Castle Hill.

The local Windsor and Slough papers reporting on the Victory Revels said that a two day holiday was declared and the joyous population danced, sung, cheered and wept celebrating the news. Church Bells rang out from Saint Georges Chapel and from all the parish churches around. It was a beautiful warm day with the temperature much higher than the average for the time of year. At nightfall the celebrations took off with a bang as rockets exploded in the sky. Men, women and children thronged the streets of Windsor, Eton and Slough in a night of sheer happiness that the war in Europe had ended. No more would there be anxious days when bomb or rocket would bring death and destruction. By late evening many of the pubs had run dry but the festivities continued to the early hours of Wednesday morning. No-one wanted to go home. The only floodlit building in Eton was the College Chapel but elsewhere floodlighting and fairy lights appeared. Among buildings lit were High Duty Alloys on the Trading Estate, Slough Town Hall and the Windsor riverside with colourful fairy lights. Army searchlights added to the illuminations. Villages around the district were also celebrating with bonfires and parties and impromptu dancing on the village greens and in the streets. The sky reflected the glow from the multitude of fires which in some villages were huge. The very large bonfire on the village green at Datchet commenced a night of celebration which continued through until Wednesday night when there was the added attraction of dancing to the music of the Royal Artillery band from the local Ack - Ack batteries.  For many children this was the first time to see lights in shop windows and such an outburst of gaiety.  Informal street parties and celebration teas for the children took place with tables and chairs and often a piano being brought from the houses. Street parties at Brocas street and Tangier Lane were arranged for the children who in addition to the tea were given an orange and one shilling.

Mr Addaway, driver of the Blue Bus, had a very excited passenger on V.E. Day. Streaming two strong wartime toilet rolls, Mrs Downs, showing the joyfulness of the day, rode on the bonnet of the bus. Celebration parties at Eton Wick were quickly organized at Northfield Road, the Village Hall and on the common adjacent to the Greyhound public house. Precious tin food that had been purchased on points and stored for this day came from the cupboard. The Victory street party in Northfield Road, organized by Mrs Harman and friends, entertained about twenty children and the same number of adults to a celebration tea with fruit salad from the Azores and a special iced cake in the shape of a victory "V". Private Mills, who was home on leave after three years overseas service, was guest of honour. After tea the children had dancing, races and games ending the day with three cheers for the boys still overseas and wishing them a speedy return. 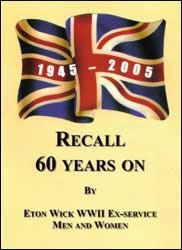 In 2005 the History Group produced Recall 60 Years On, a book about the lives of the Ex-Service men and women who had made the Eton Wick their home. 52 of the 60 plus veterans provided their biographies and it was published with the support The National Lottery Community Fund. 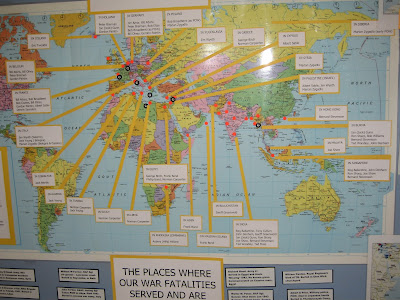 This photo shows where the veterans of WW2 who were residents of Eton Wick in 2005 saw service. It was taken at the exhibition held to celebrate the 60th anniversary of VJ Day.
Posted by Steve Denham at 06:00