Air activity during September increased the frequency of daytime alerts for the district followed by an increased number of high explosive bombs being dropped.

Parents were concerned for the safety of their children and complained bitterly to the Eton UDC about the provision of shelters for the school. The Council made another strong   appeal to the Bucks Education authority, also to the Secretary for Education to remedy the situation. Both authorities replied that it was impossible to provide shelters for Eton Wick schools at this time, but it would be done as soon as possible. With the view to erecting air raid shelters an architect surveyed the school building but months were to elapse before shelters in the Wick were sanctioned and completed.

A canvas of Eton Wick householders resulted in 57 applications for Anderson or Morrison shelters. Eventually the Surveyor reported that sanction had been obtained from the Ministry for the erection of 48 and 24-person communal shelters at the following sites.

Air raid shelters for Eton were located at:-

The railway viaduct, a half mile from Eton Wick, was not thought to be practicable and was never used by the village school. One hundred and seventeen applications were received by the Eton UDC for help with domestic air raid precautions. Materials were supplied in 58 cases and work was carried out in another 23. At Broken Furlong and Vaughan Gardens it was advised to use the archways through the houses as a communal shelter in each block.

About 4.30 p.m. a German twin engine bomber dived out of the clouds near the Slough Trading Estate and machined-gunned the town in several places. Light ack-ack (40mm Bofors) batteries opened fire as the enemy flying through driving rain South of the Bath Road, passed unharmed through the Balloon Barrage to drop several bombs causing damage to property. There had been several small raids during the day to bomb airfields in Southern England and the intended target was possibly the Hawker Aircraft factory at Langley. 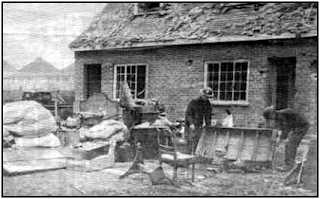 A clear moonlight night after the fog and rain of the weekend brought 400 German aircraft to bomb London. Enemy aircraft passing over the village drew fire from the surrounding anti-aircraft batteries lasting into the early hours. At 8.30am the sirens again sounded the alert, the all clear sounding at 9.25 am.

The last days of the month brought less enemy activity over the area due to cloud, rain and fog. Under the cover of bad weather, a lone raider dropped bombs on Dennis Way, Cippenham killing two people, also on the private polo ground of Dedworth Manor killing a pony. Warnings of enemy activity disrupted the Eton Wick school day on nine occasions during October which made the teachers anxious for the safety of the children. There had been no sign of work commencing on shelters so the children stilled practiced the usual precaution of taking shelter under their desk.

The official end of the Battle of Britain, which lasted 114 days, cost the German losses of 1,733 planes and 3,893 men with RAF Losses of 828 planes and 1007 men. The end of the battle did not solve the social difficulties of the evacuated families; sharing a home with strangers whilst one’s children were billeted elsewhere was a problem. To help with the   situation a centre was set up at the Church Hall, Eton, to give evacuated families somewhere to meet and also give householders a chance to have their home to themselves for a short time. Those who were able, helped with knitting comforts for evacuee and service personnel. Wool was purchased with the money earned from the sale of salvage. The salvage of waste, conducted by Mr Chew with the help of young volunteers, around the village had gone well with the sale of scrap iron, paper, rags and any other commodity worth salvaging realizing a handsome profit. A suggestion of Mrs Chew to use this money to buy wool with which to knit garments for men and women from the village serving in the forces was readily adopted.   A display of posters in the village shops asking for volunteer knitters was organized by Mrs Mead.  Forty-five volunteers   including three Eton Boys signed up to whom £15 was initially allocated to purchase wool. Once a week the Methodist Hall jumped from her bed and grabbing a bottle of gin, took herself to shelter under the stairs. A miraculous recovery followed much to the distress of some of her family who evidently found the aged person a trial. was loaned free of charge for the issue of wool and collection of finished articles. Within the first few months many knitted items were produced and about 100 items, such as scarves, mittens and socks sent to over fifty servicemen in the first few months.

To raise money for war weapons, great publicity was given to National Savings, a campaign vigorously supported by Eton Wick. The school had a flourishing savings group run by the Head Teacher, Miss Plumridge, which was well supported by the mothers. The Women’s Institute also had a group amongst its members but their committee felt more could be done in the village, so every house was canvassed. Two groups were formed, one run by the Methodist Church and the other by the Women’s Institute.  A third group made up of the school and supported by the evacuated L.C.C. School gave total enrolment of over 300 savers.  Volunteer collectors, braving the winter weather and blackout, called on savers each week with saving stamps, their combined collection averaging of £28 each week.  The school, encouraging pupils and parents to save, collected £10 in the first week and £30 during the following six weeks. Many schemes would materialize to raise money before the conflict was over such as "Wings for Victory" and "War Weapons Week". Introduction of a purchase tax on household goods and clothes at the end of October made little difference to the goods sold by village traders. Other shortages however did effect village trade, namely an acute shortage of coal. The increasing demands of factories for power produced a shortage of supplies to the householder which became evident during the winter months of 1940-41. To help overcome the fuel crisis, men conscripted for military service, were selected by ballot, and sent to work in the coal mines. They became known as Bevin Boys. Coal merchants Albert Dear, Brocas Street, Eton, - William Parrot. 1 Clifton Cottages and Albert Hood, Tilstone Avenue, Eton Wick had difficulty in obtaining supplies and rationed their customers accordingly. When Albert, who went into the army his business was acquired by R. Bond and Sons.