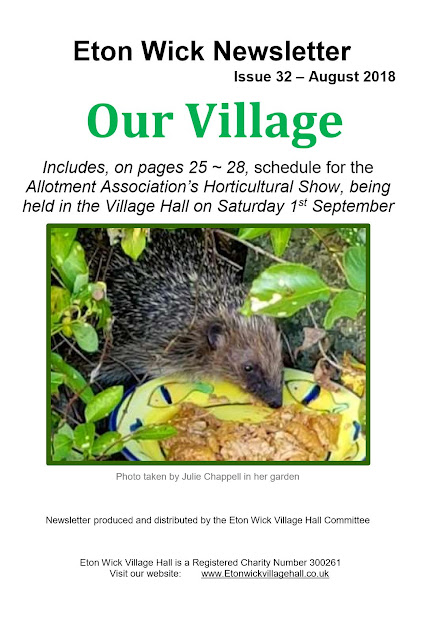 Increasingly it seems our public services are finding it difficult to meet their purpose. Almost daily our so-called news is not in any way news, but a demand for more money to be poured into Health Services, Schools, Police, rail and roads. In many respects I think we are fortunate in Eton Wick: we are still surrounded by countryside; have pleasant walks; and still within a convenient distance of towns, rail stations and airports. At times there is a traffic build-up along the road to Eton, which is probably more of a nuisance to Eton than to the village.

There had been rumoured talk, and maybe suggested plans, to divert some of this traffic away from Eton College, but probably nothing more than wishful thinking at present. If this did become a reality I personally think it could be detrimental to Eton Wick, as more 'through traffic' would consider today's present deterrent of congestion through Eton to be no longer relevant. Be that as it may, the future is not ours to see, and at my age not to get bothered about. A bit like the bungalow in Sheepcote Road named 'Byjia' meaning "B.... you Jack, I'm alright!'

Let us then look back on early Eton Wick roads. I know of very little written about them, so using what we know, and a common sense of deductions, we can conclude that roads locally often originated as tracks, were often very muddy, and at best used by pedestrians, horse riders and horse traffic — most frequently farm carts. There were four of these routes East to West and West to East, and three others North to South and vice versa. Additionally, there were probably two others; the present named Moores Lane to Cippenham, and another from the Great Common to Chalvey. The through roads East to West were our present main road variously known as the Eton Wick Road, or the Dorney Road (now B3026).

Secondly, we have the track Dr. Judith Hunter described as the King's Highway. Undoubtedly old, this track is from the village hall, then south past Hayward Mead houses, past the Scout H.Q. and on past Cuckoo Weir; Eton's Meadow Lane; and terminates at Brocas Street for Windsor Bridge. Interestingly about 200 —300 metres from the village hall this track is diagonally met by another track that starts in Boveney Village, passing north of Boveney Lock and crossing the Boveney Ditch at Splash Bridge, then on to join with the aforementioned South Field track. Given the age of Boveney, this route to town may well be our oldest. In the 20th Century this was indeed a 'splash bridge': horses or horse vehicles would be led through the stream, and rider or carter could hold the bridle and keep control while walking across the plank himself. Many villages will remember floods sweeping away the plank crossing, and today's bridge replacing it in 1993.

Our third west to east road was perhaps only ever much used by farmers, and like the South Field track just mentioned was never given a modern road surface;. destined for ever to be a relic of bygone times, being then seasonally dusty, muddy and very rural. Number three then is 'Inner Wards' and extends from Common Road, north of the Common stream, to Eton College's Common Lane. This route to town would have served Saddock and Manor Farms, and of course give access to the open land between Eton Wick and Chalvey.

The fourth west to east road is quite different, as it is not a through road, but a village road along which most of the early village was developed for homes. This of course is Common Road, probably only 600 to 800 metres in total length and for much of its length immediately south of the Common stream, which undoubtedly accounted for the early near development. From the west of the Great Common (narrow strip) it extends along the Common for about 200 metres and then turns north, terminating at Little Common. (Little Common is next to the motor museum). Any other east west roads in the village are less than 130 years old and are estate or housing access roads.

The oldest north/south roads were probably all access roads for the local farms. The Common Road (west), formerly Brown's Lane, gave access for Dairy Farm (formerly Wick Farm) to the B3026. Bell Lane gave access to Bell Farm, which incidentally also connected with the start of the old King's Highway track. Some maps show, at the junction of Bell Lane and the B3026, the road was gated. Presumably as a precaution preventing cattle straying. The third north/south road was Sheepcote Road. This was gated at the north/Common end. I remember Sheepcote Road as a straight and very muddy track with a single row of five or six terraced houses appropriately named Castle View Terrace. There were allotments opposite the houses, and below the school. No flats or bungalows. This was truly a farmer's track from `Saddocks', 'Manor' and 'Little Common.' The 'Walk' road was probably not developed until mid 1800's, from a foot track used to access the Greyhound pub. Other village roads were made when the area was developed for homes, and like so many places never built to cope with motor traffic on today's scale.

How wrong we are when we say that nothing changes. As technical boffins are busily making workers redundant with their ever-advancing automation and robots, concern is at last being expressed for the countless truck and van drivers who may not be needed when driverless vehicles become the norm. Once invented, nothing takes long before it takes over.

In 1907, just 111 years ago, and 25 years after the first motor engine was developed by Benz, villager Ted Woolhouse bought a De Dion car; the first known motor car for Eton Wick. It was quite a year for Ted, believed one of at least four brothers, as in 1907 he opened the village's first cycle shop, using the front room of what is now 56 Eton Wick Road. This was the age of high upright bikes with straight handlebars and carbide lighting. Battery lamps were to come later. Ted assembled Royal Enfield cycles for sale, and with repairs and hiring at two pence an hour, he earned a living until after WW2, over forty years later. This was of course interrupted by at least two years army wartime service, following the Conscription Act of March1916. The first two years of the 1914 - 1918 war produced sufficient voluntary man power.

Only twelve years after the first car for Eton Wick, the village was petitioning for motor vehicles going through the village to be restricted to 10 miles per hour, and at this same period a huge dump of ex-army war vehicles was created at Slough, on a site later developed as The Trading Estate, forever referred to as 'the dump'. This should not give the impression of considerable car ownership. Not until well into the second half of the 20th Century, and quite forty years later, was this the situation. As an early 1930's schoolboy walking to Eton Porny School we often whipped Meg or Tee Tops along the main road to the rail viaduct, or played 'flick on' with fag cards along the footpath kerbs, and considered the occasional car a nuisance to our games.

Pre WW2 the local 'big day' of the year was the College's 'Fourth of June'. This was the one day when many luxury limousines; often with liveried chauffeurs, parked along the college area roads. That show of splendour has never been equalled since.

In 1934 my brothers were ball playing along the road close to the 'Three Horse Shoes' pub (now a residence: 'The Shoes' no. 44 Eton Wick Road), when King George V's car drove through the village. Of course it was obliged to stop, on account of my brothers. Before Windsor Bridge was closed to vehicular traffic, in the early 1970's, it was not uncommon for V.I.P's enroute to Windsor to drive through Eton Wick. On this occasion my Mother came in for local tongue wagging, for letting her boys hold up the King.

It was about this time that families who were lucky enough to own a wireless set (not then known as radios) would tune in to hear Hitler addressing the German nation. None of us understood a word of his speeches, but undeniably there was something riveting about his ravings. At least I thought so, until on one occasion he declared that the day would come when all German families would own a car. At this I thought he must be mad, no working man would ever afford a car. Of course, this prophesy was probably the most accurate thing he did promise.

A contemporary of Ted Woolhouse was Norman Lane. He too served as a young man in the Great War of 1914-1918. Norman served in the Royal Flying Corp which became the Royal Air Force on April 1st 1918. Wireless sets were not available, or did not exist when that war ended, and in 1923 Norman and Bill Brown (ex-army) assembled a 'cats eye' receiver and claimed it as the first wireless in Eton Wick. Again, in a few years most homes had a wireless; be it second-hand or new, all were big, temperamental, and had a large dry battery and an accumulator battery that was collected weekly for re-charging. If electric radios had been available they would have been useless in Eton Wick until 1949-1954, when the village first had electricity, which slowly became installed in homes.

It would appear that whatever is new soon spreads until everybody attracted to the novelty puts it on the 'must have' list, and in this respect, nothing changes. 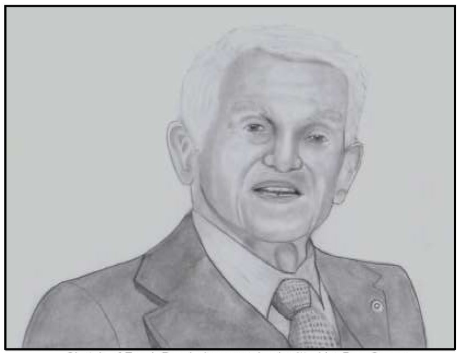 A portrait of Frank Bond by Ben Gower

First published in Our Village in August 2018