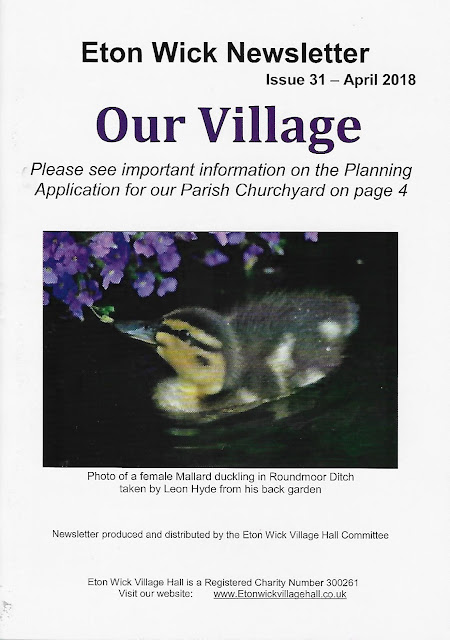 St. Mary Magdalene, Boveney — where in earth were they buried?

Twenty plus years ago a very young lad innocently asked me what it was like living with dinosaurs. I am sure my answer disappointed him. He was too young to have the perception of time, but how much better are we as adults. I have not read of an accurate account of the age of Eton Wick. It is often written that with the Saxon name of 'Wick' it probably dates to Saxon times. This is of course an assumption, as Saxon words are often used, as in 'Butt', 'Close' and others.

Early settlements may have been just that — a place a few folk seasonally settled, before moving on. Something like the travellers of today live their lives. This Thames Valley area is often described as having been damp, dark and dense, in clusters of trees and undergrowth. If we look at what is recorded, and presumably reliable, we start at 1066 when the Normans defeated King Harold's defenders. We will not steam up about that, as who can say which of us are perhaps Norman descendants. Twenty years later William was still not sure of the extent of his conquest and consequently ordered a census. The Manor of Eton, together with Hedgerley and Wexham had in total only 23 families and 3 slaves (serfs). These facts are as printed in Dr. Judith Hunter's excellent book of 'Eton Wick'. If Eton Wick was a village in Saxon times, it too would have been included in that total of 23 families, as it was part of the Manor of Eton.

I think of this period of nearly 1,000 years ago as one of seasonal mud, and thick woollen clothes to cope with the damp, cold surroundings. Let us refer to a letter sent from the Pope in 1511 with perhaps a slight reference to the mud along the Boveney Road. In a Papal letter dated August 15th 1511; twenty-three years before 'The Act of Supremacy' abolished the Pope's authority in England; he instituted a cemetery at Boveney Church, "without prejudice to anyone; that the inhabitants of Boveney may be buried therein; this being in consideration that the village is about two miles from the Parish Church at Burnham and in wintertime the bodies of the dead cannot be conveniently brought to that Parish Church."

It is difficult today to fully imagine a family procession having to wend its way along the muddy farm track we now know as the Boveney Road, on its way through Dorney to Burnham. With the Pope's authority for a local cemetery at Boveney, it seems inconceivable that nobody used it. Yet there is no visible evidence or memory of there ever having been a graveyard at the village church. Boveney was not a relatively small village, as we now consider it. In 1377 there were 165 inhabitants living in 28 dwellings. Comparing this with only the 23 families in the whole of the Manor of Eton with Hedgerley and Wexham 290 years earlier, leaves us to question the census return for King Williams' assessment. 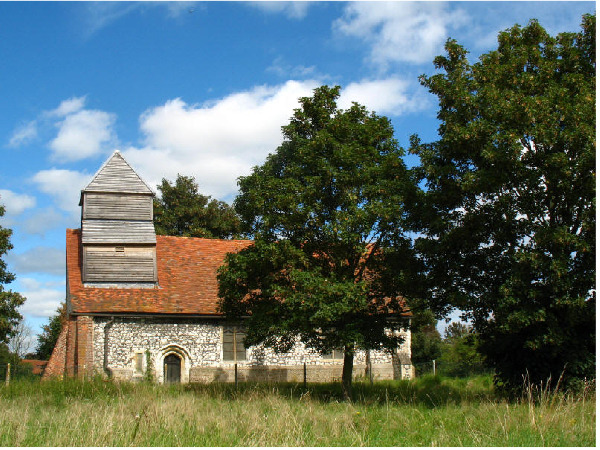 The mystery of a cemetery deepens when we look at the other recordings. In 1859 a Mr and Mrs S. Hall of London published a book titled 'The Book of The Thames'. They arrived by boat from Windsor, and wrote "Let us step ashore to visit yon wee church of Boveney, half hidden among lofty trees, it is the last of its class we shall ever encounter" etc., ....."After inspecting the interior, and wondering why so small a church was ever built, we returned to the churchyard and stood for some little time beneath the shadows of a glorious old tree, whose boughs and foliage formed a protection against the rain or sunshine. The old withered women who had opened the church door followed and regretted the gentry should be disappointed as there was nothing to see." We differed from her, saying there was a great deal that interested us, could anything be more picturesque or beautiful than the churchyard? She shook her head "The churchyard was thick with graves, some with stones and some without, like any other place of the sort — a poor melancholy place it was." "She thought it was so lonely and miserable, and yet sketchers were always making pictures of it! Yes there were stories of those who lay there"... and so the narrative went on.

Let us leave the book on the river, and glance at yet another reference to the cemetery; yes or no. Over 100 years later in 1997 a letter was posted from Brewton, U.S.A. to an authority in UK requesting information on the Boveney Chapel and graveyard where ancestors Montagues worshipped and were buried. The enquiry stated that an American family member had recently visited the church but found no signs of a graveyard, and found it out of character with England's history of preservation that the graveyard was destroyed. The Montagues dated back to 1621 in the States, and it is recorded that William Montague in the latter part of Queen Elizabeth I reign (1558 —1603) purchased for Boveney two butts of land commonly called Church Butts; so the connection was authentic enough.

With nothing to be seen, it is too easy to fall back on the old saying 'that seeing is believing' and dismiss what seems obvious. I have my own views about this, but with little more evidence I will leave it to the readers to form their own conclusion. There is so much more about 'yon wee' church that leaves perhaps more to be questioned. Have you noticed that it was built on an earth, two to three foot, plinth? This is best seen from the Boveney/Conker Alley gate at a time of year with low or no crops. Obviously this was on account of floods because at high water times this area is one of the first to flood. The church, or more correctly what is left of the original, is variously described as twelve or thirteenth century, meaning that Boveney village had a church six or seven centuries before Eton Wick (1866). Although Boveney church (St Mary Magdalene) in the Parish of Burnham served that village, I feel quite sure many Eton Wick residents of centuries ago would have attended services at Boveney. Eton Wick's only church was the Eton Parish Church which between 1440 and 1875 was the Eton College Chapel and as the College itself grew, there became an apparent less inviting atmosphere for the local folk.

It was, after all, no further to walk to Boveney than to Eton. In St. Mary Magdalene Church there are thirteen pews of four seating. The old pews are estimated to be around five hundred years old. Before this period pews were not expected, and congregations stood in the Nave. This apparently is the origin of the saying "Go to the wall", not a derogatory remark, but a polite reservation of a place for the aged and the infirm to lean against.

There are three bells dating to 1636, 1631 and one estimated 100 years older. The church walls are three to four foot thick, and oddly the two doors - one north wall one south facing. are exactly opposite each other. The original steel key weighed about two pounds and was approximately a foot long. Sadly I am told this was lost: or we are left to think otherwise. How does one lose a foot long iron key weighing two pounds? To my knowledge the last ringing of the bells was to welcome in the new millennium (2000). They were interestingly rung by visitors from London in the mid 1850's. who noticing the villagers busily working in the fields of Boveney. mused whether or not they had heard that Sevastopol, in the Crimean, had been taken by British Troops. They duly rang the bells. and the villagers hurried to the church for the news. Oh for the innocent days before radio and newspapers.

Questionable belief attached to the church is what was it first built for. Why we have to have a reason and not accept the time-honoured need for a place of worship, I do not know. Many like to believe it was built for bargees who had a wharf close by. I find it more acceptable that it was used by bargees, maybe hundreds of years after it was built. who customarily had their family living aboard, and although not necessarily use the church for services, but not disrespectfully make use of it for warmth, and perhaps a meal. Certainly timber was a major cargo, as two large sawmills/pits are shown on maps north of the roadway close to the present day car park.

Views I have expressed are my own conclusions, and I do not claim as certainty. The church was probably saved to posterity when it was taken over by 'Friends of Friendless Churches' in 1983 who subsequently made extensive refurbishment. For ecclesiastic purposes this Church of Burnham for so long. became part of the Parish of Eton in 1911. Old Boveney as a community is not part of New Boveney. which is that part of Eton Wick between Bell Lane and Roundmoor Ditch (gate to Dorney Common). Developed from 1880's and administered as part of Eton since 1934. One is Burnham (Bucks), the other is Eton (Berks).

We could go on, but I am sure space must be left for other contributions. Conviction or doubts, I am always ready to discuss these expressed views. Frank Bond

This article was originally published in the Eton Wick Newsletter - Our Village and is republished with the kind permission of the Eton Wick Village Hall Committee. Click here to go to the Collection page.