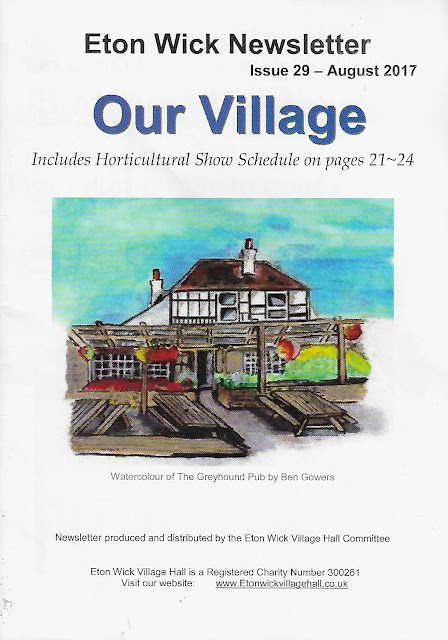 I know of no record of our village's involvement in a war earlier than the two world wars of the last century. Before that time the village population was quite small and as a community was generally regarded as a part of Eton. To meet the threat of a Napoleonic invasion in the early 19" Century, Eton responded to the national call to arms with 200 volunteers of which forty-two were called into the Militia. Very probably this number included men from Eton Wick, but we cannot be certain. Again I know of no record of villagers serving in the Crimean War (mid 1850's) or the later African/Zulu conflicts.

It was 1914, August 4th; that the Great War engulfed Europe and beyond. At that time the Eton Wick Scouts were at summer camp at Osmington Mills, near Weymouth, and the news of war would have been late in arriving in an era of no wireless or 'phones. At least two of these campers were to be fatal victims of the war, and another to become a P.O.W. of Germany. The photo tells us more than the image. Eton Wick had an established Scout troop within six years of the Scout Movement starting nationally.

The Great War lasted four years and three months, and took thirty-four village men's lives. So horrific, it was believed it would end all wars; but not so, as a little under twenty-one years later WW2 was launched (never say never). Only now that WW2 was being fought, would The Great War become known as WW1. I am not able to say how many people served in the forces from Eton Wick in either of those wars. The village population had remained about 1,100 throughout that period, and it was post WW2 that the expansion and increased population came about in Eton Wick. Conscription; or compulsory military service; was first introduced in March 1916 when the flush of volunteers had begun to dwindle, but it was a reality from the onset of WW2. In fact it had been started several months before that war, with young men being mobilised for six months' service. Some villagers were thus 'called up' but were not released, as the war started before their six months had been completed.

Probably between one hundred and fifty and two hundred villagers served in each of the wars with perhaps a little less in the 1939-1945 conflict, due to exemption for many local industrial workers on the Slough Trading Estate. The 'Estate' did not exist at the time of the Great War (1914 — 1918), having been created on a large war vehicle disposal or dump area; after that war. The term 'dump' stayed with the rapidly developing industrial area. Most of the men who were not called for military service in 1939 were however obliged to work very long hours in the factories and still serve as air raid wardens, fire service, home guard, messengers and other unpaid essential services. Younger citizens during the 1930's who were born between the wars were uncaring about the newspaper warning of impending war, but the middle-aged veterans of the past war were not so casual at what was becoming an increasing certainty.

Several months before the September 1939 outbreak, all villagers were expected to report to the Institute (now Village Hall) to be issued with a gas mask. It had to be a personal visit, as the straps holding the mask to head needed to be adjusted according to one's head size. This issuing and fitting was carried out by the village Postmaster/Grocer, Harry Chantler, and Archibald Chew. Gas masks were issued in a cardboard box, and from the outset of war were carried to school and work slung over the shoulder. It was not long before a variety of inexpensive canisters were marketed to replace the boxes, and in many instances the gas masks were not taken everywhere. once familiarity had replaced caution. Service personnel had a different respirator that tidily fitted into a khaki canvas holdall.

From the outset a 'blackout' was strictly enforced, and no chink of light was acceptable at night. Screens were made to cover windows, using special blackout material that was available without ration or coupons, or in many instances utilising thick tarred paper that was used industrially for sea conveyance of goods in the days before shipping containers. There were very few cars in Eton Wick, and mostly those would have been garaged for the duration, as very little petrol was allowed. Vehicle lights were of course mere slits of light on account of the restrictions.

The village may have missed familiar faces that were away in the services, but numbers were not so affected. This being due to the anti-aircraft battery stationed on Dorney Common. One photo of the camp reminds us of its size, showing fifty seven men and forty seven women equipped with a battery of four 3.7" heavy guns. When in action they certainly rattled many windows in the village. To protect Slough's Trading Estate from night air raids the area was lined with smoke emitting chimneyed stoves. Eton Wick being south of Slough was well lined with these and the black oily smoke would drift toward the Estate on prevailing winds. Cycling through this smoke gave sore eyes, black nostrils, and filthy curtains. In the event Slough was not targeted and did not suffer the effect of being bombed, whereas Eton did. Probably by accident, and not an intended target; Saville House in Weston's Yard was destroyed on a December evening, 1940. Quite a number of incendiary bombs were dropped locally, and on one occasion many fell in Sheepcote Road. Mostly they burnt out on allotments which covered the area now used for blocks of flats in Sheepcote. An incendiary did go through the school roof causing limited damage. As a seventeen-year-old I was with several others trying to cover the fires which of course could be a bright beacon to bomber planes still overhead. As we moved from one covered bomb to the others, the bomb recently covered quickly burned through the soil and needed more attention.

Promptly at the threat of war, London children were evacuated and although being near the city, many evacuees were billeted locally. Their schooling was arranged for the Institute (village hall), and initially they had their own teacher. Of course most peace time functions at the Institute were stopped for one of many reasons. Very dark evenings; adult organisers in the armed forces: or doing essential work; nervous leaving the house, or the evacuees in their homes. Many established groups stopped functioning for the duration; some never to be revived. These included the Tilstone Tennis Club. sports groups and the Boys Club. The latter became the Youth Club for both boys and girls in 1946 when the war was over.

The recreation ground was used for growing cereals but was not very successful. We must not forget that during WW2 Eton Wick had no main drainage, and no electricity. This meant no refrigeration, no central heating: only accumulator powered wireless sets, and most mobility depended on cycling.

Many years later I visited Harry Chantler and he told me that in the late 1930's there were only four telephones in Eton Wick. As the village postmaster he had one, Burfoot the local builder had one (now the site of a golf buggy business), Archibald Chew of Moores Lane had the third and lastly so did Roland Bond, road contractor then living in Palmer Place.

In 1939 there was no Colenorton Crescent (c) Stockdales (c) Boveney New Road (c) Haywards Mead (c) Wheatbutt Estate (p) Bunces Close (p) Tilstone Close (p) east side of Tilestone Avenue (p) Princes Close (c) Housing West of and lining the Eton Wick Road between Vaughan Gardens (built c.1939) and the Roundsmoore Ditch (c). Also Sheepcote Road, Common Road and Bell Lane have been extensively added to and bear little resemblance to earlier images (c and p). Victoria Road has also changed by building on its numerous gaps (p). The bracketed (c) and (p) denotes Council or Private development. Previous to these post WW2 developments Eton Wick was very much more rural and during WW2 several households took advantage of their larger gardens, keeping chickens, ducks and even a few kept pigs. This of course led to an occasional unauthorised killing, and more meat than the allowed ration. This did in fact lead to an Eton Wick reference by Flanagan and Allen in their Crazy Gang show at the Victoria Palace. All good humour, but perhaps best left to rest. Looking at war time photos we surely notice how slim everybody was; no sign of obesity so perhaps those uninteresting and small rations were not so unkind.


This article was originally published in the Eton Wick Newsletter - Our Village and is republished with the kind permission of the Eton Wick Village Hall Committee. Click here to go to the Collection page.