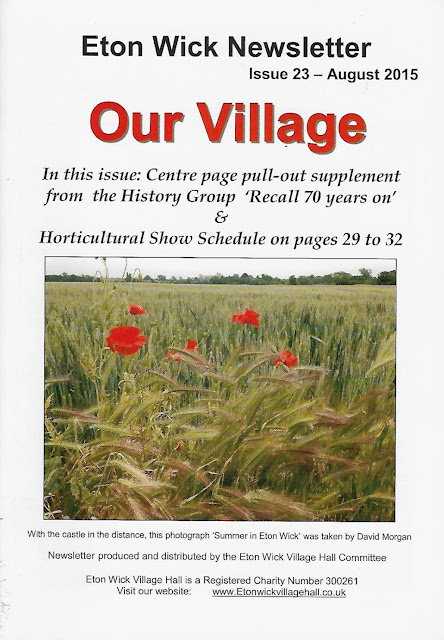 Our village - 85 years back


2014 was the 100th anniversary of the outbreak of the Great War, and a year later, in 2015, we celebrated the end of the Second World War; seventy years before. There were many functions of remembrance in 2014 but of course no living person could truly remember events of so long ago. By the nature of all things, in the passing of a very few years there will be nobody to remember WW2. Hearsay and history is often far from factual. Those who experienced the worst horrors of war rarely spoke of them, while others more fortunate readily related what they had seen and done. When I was growing up in the 1920s and 30s I noticed people dated events with the prefix 'Before the war' or 'After the war' meaning of course The Great War of 1914 — 1918. Years later my generation use the same terminology, but meaning WW2 1939 — 1945. War being a datum line in our memories; so I will now 'tap' my memory and record a little of my 'Before the war' (1939 — 1945) years in a very rural Eton Wick in Buckinghamshire. It only became part of Berkshire in 1974.

Eton Wick was only ever a working class community with no 'big houses' and gentry. In fact I only know of one titled resident, Lady Julia Hulbert, the mother of the village priest 1924 — 1931. Incidentally the lectern in St. John the Baptist Church is appropriately inscribed to her memory. The old village of Eton Wick had about 500 residents at that time, and Boveney Newtown 550. Both had their own rural councils. In 1934 they were merged and became part of Eton Urban District Council.

As youngsters — please not kids, as in those years only goats had kids, most of our free time was spent out of doors, with boys 'mooching' the commons, ditches, fields and hedgerows. To 'mooch' covered a multitude of activities, often dictated by the season. Perhaps collecting tadpoles; blackberrying; fishing; bird nesting; getting rubbish and wood for the autumn bonfires; tree climbing; making tree camps; gathering cowslips; cornflowers and making catapults; bows and arrows; and crude little boats to sail along the stream. Seasonally there was an abundance of tadpoles, frogs and tiddler fish. During the summer we gathered many different grasses for competitions in the annual Horticultural Show. Usually we collected about seventy varieties, which were displayed on a sheet of white card. In this and other ways we really got a better understanding of the seasons, and our local natural world. Many local areas had names rarely used today. There were the 'Withies'; Tip; 'Hillies'; Gudgeon Pool; Athens; Chinese Bridge; Iron Bridge; Slads; Butts; Blind Alley; Plantation; Jungle; Slipes: Spackmans; Boveney Hole and Dump. The most obscure being Gudgeon Fool. which is the field east of the track from the main road (B 3026) to Crown Farm. This was certainly a floodable area, so was there ever a fish in the flood; or perhaps attributable to a family name at some distant time. Not so fanciful when we have had Eton Wick names of Codd; Crabbe; Dace and Whiting in the last eighty years.

The 'Slads' and Folly Bridge Pound are better known. The Slads, or Water Slads, being the first place to flood, is said to mean a hollow. The Pound is where stray or unauthorised cattle were impounded, and I presume Folly Bridge is in fact just that - not a bridge but a culvert under the road, hence 'Folly'.

From the Slads, and heading south for 200 metres, and turning west toward Eton Wick from the rail viaduct, the land is a little undulating and this was known as the 'Hillies', much frequented by the Eton Church Lads Brigade during the 1930s, and here, with the Old Highway on our left, was an ever smouldering large rubbish tip. This was a great attraction for school boys, and at a time of little or no rubbish collections, very necessary. Here then was the 'Tip'. Todays' walkers west of the old tip site may be struck by the hundreds of small china shards scattered over acres of farmland. Not an ancient civilization, but the levelling effect of that old pre WW2 tip. Nearby is Chinese Bridge spanning the 500 metre backwater we know as Cuckoo Weir. Several times this bridge has been rebuilt but always retaining the familiar appearance. Maps show Chinese Bridge as Long Bridge, Long Bray Bridge and Upper Hope Bridge. Cuckoo Weir is now used as a Swan Sanctuary. Until mid-20th century it was used by the Royal Humane Society as a safe swimming place for local residents, and separately by the College for juniors and non-swimmers. Cuckoo Weir flows on until it re-joins the Thames close to the rail viaduct. The bridges at this junction are Lower Hope and Bargeman's Bridges. Why the name 'Cuckoo Weir'? I can only guess that like the play 'One flew over the cuckoo's nest' it suggests a non-existence; either the nest or the weir. I have however seen an older book that names the water as Cuckow Ware! A little upriver of the bridge is a substantial area of untidy saplings and willows, once an osiery of 'withies'. In times much past 'withies' were invaluable for eel and fish traps; baskets; furniture and wattle and daub walls. In the 1930s Eton College fenced this off, and used it as a bird sanctuary for their young ornithologists. No longer is it being well used. Here then was the "Withies"!

A little over 100 metres west of Chinese Bridge was 'Athens', an earth mound at the river bank, originally surrounded by water, and a swimming place for Eton College. The mound has now been levelled, and the site is marked by a seat which has a large stone block beneath that bears two metal tablets. One quotes the College rules for swimmers as pertained in 1921, the other states that 'Athens' was given to the College by parents of a particularly talented College boy swimmer who was killed in a flying accident in 1917. Here then was 'Athens', which with the post WW2 emphasis on a modern swimming pool, made this and other places obsolete.

Three to four kilometres upstream is Oakley Court Hotel; on the south bank of the Thames. Reputedly built to resemble a French chateau, to ease homesickness of a young French bride, it much later was used by Bray Film Studios for their Hammer House of Horror films before becoming a hotel. Very probably the original owner had a large copse of trees planted on the north bank which to this day obscures much of the Boveney farmland beyond (now of course a rowing lake). This copse was the 'Plantation' of my youth. 'Boveney Hole' I always thought a derogatory term for Boveney village. Not so! The term 'Hole' can mean a bathing place, or a place of slack water. There is such a place approximately 150 metres upriver of Boveney Church where the 'slack' water is caused by a sharp bend in the Thames. It frequently needs the dredging of a reed bed. Again looking across the river there is a fine building, now flats, that before WW2 was a home of a very wealthy Indian and his large entourage - Dunji Bois Bomanji (probably mis-spelt). An employee told me that money was cleaned on a regular basis before the gent would handle it.

The pathway from Eton Wick to Cippenham was formerly a rough and seasonally muddy track through open fields; we knew this as the 'Slipes', becoming Wood Lane half way to the Cippenham road. During the 1930s to 50s this was a regular busy route to the work places of perhaps the majority of Eton Wick's working residents employed on the so called 'Dump', otherwise the Slough Trading Estate. It was known as the 'Dump' because after the Great War of 1914 - 1918 the large area was used as a scrap yard for many of the wars' vehicles. Only later did the site become developed with many different industrial factories. Where the 'Slipes' becomes Wood Lane there is to the left an overgrown spinney. This we knew as the 'Jungle'. A little further on and to the right we now have an estate of dwellings and Asda store. Around this area was 'Spackman's' private air strip and hangar. Mr. Spackman, with his brother, reputedly flew their small biplane to Brighton for an early morning 'splash' after which they returned to base for breakfast. The windows of that small hangar were a big attraction where we would peer through at the plane. All is gone now, but nostalgically there is a Spackmans Way on today's nearby estate, thereby ensuring that what is gone is not necessarily forgotten.

Then we had 'Blind Alley', not far away, but usually we went there from Little Common. This dark, overgrown and muddy cow track is off the North East corner of Little Common and leads to the Chalvey stream where we occasionally found Newts. To the east was the 'Butts' where Eton College cadets had a long distance rifle range. The post WW2 building of the M4 motorway resulted in a shorter and much diminished range. In times of use, red flags warned pedestrians not to use the Eton Wick to Chalvey footpath. The route was much used in my youth as it could lead to Chalvey and Slough's Adelphi cinema. Now of course we all have cars and there are no big cinemas. I guess we cannot have everything.