John was not a local lad; he had been born in Aberdeen around 1898, spent much of his life in Montgomery Street, Edinburgh and returned to Aberdeen to enlist. We know very little of his life before he joined the army, except that The Windsor and Eton Express dated 22.5.17 stated he was the second son of Mr & Mrs W.G. Clark of 2, Ada Cottages, Eton Wick, and after two years service in France he was killed in action on the 23rd April 1917 at the age of 19 years. Allowing a period of training, and two years in France, he was probably 16 years old when he falsified his age for acceptance into the army.
Until 1913 Ada Cottages were occupied by T. Lovell, where he ran a successful bakery, general stores and the village Post Office. It was about this time, perhaps one or two years later, that the premises may have been let to Mr Clark. There were several families named Clark in Eton Wick at the time, but no apparent relationship between them. It seems very likely Mr & Mrs W.G. Clark moved to Eton Wick and Ada Cottages during the first year of the war.
A former Eton Wick resident, whos e maiden name was Clark, has declared no knowledge whatsoever of John Carfrae Clark, though her own father's name was Albert Shiel Clark. He lived in London, but because of Zeppelin raids on the capital, he moved to Eton Wick around 1916, to live at Ada Cottages. Their address in Eton Wick and the fact that both men had, for second names, Scottish place names (Shiel and Carfrae) points to a family relationship. Nevertheless, in later years, Albert Shiel never made mention to his daughter of his own dead brother, or cousin.
A few years later there were plans to use part of Ada Cottages as a shop again. Mr & Mrs W.G. Clark moved to 28, The Walk, Eton Wick, and A.S. Clark moved to 5, Albert Place, Eton Wick.
John was in the Royal Field Artillery, 255th Brigade as part of the 51st (Highland) Division, originally the 1st Highland Field Brigade from Aberdeen. An artillery Brigade was numerically very different to a Brigade of infantry but was not dissimilar to an infantry Battalion.
By 1917 the R.F.A. batteries of guns on the Western Front, were either of 6 field guns or 6 x 45 Howitzers. There were 4 batteries to each Brigade and 2 Brigades to each Division. On the 23/24th April 1917 the 255th Brigade R.F.A. (John's) were in support of the 51st Highland Division (Artillery), taking part in the Battle of the Scarpe. Specifically their attack was aimed on the village of Roeux, with its chemical works. The official history (1917) states:
"a great deal had already been asked of the 51st Division"
and in Roeux they undoubtedly met with fierce opposition. 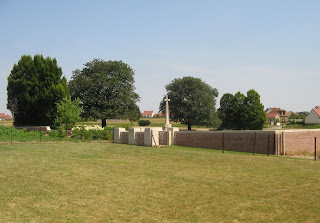 It was on April 23rd John Carfrae Clark was killed. He is buried in the nearby cemetery of Anzin-St-Aubin. The cemetery was first used in July, 1917 by John's Division, the 51st. It records a total of 358 graves: 291 being from the United Kingdom, 63 from Canada and four others. The cemetery is situated three miles north west of Arras. The local paper of May 22nd 1917 reported:
Clark, John Carfrae, second son of Mr and Mrs W.G. Clark of 2 Ada Cottages, Eton Wick and formerly of Montgomery Street, Edinburgh, and of Aberdeen. Gunner Killed in Action 23.4.1917 after 2 years service in France. 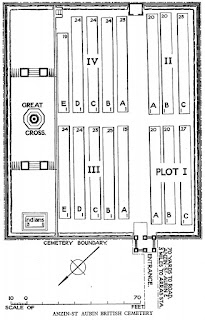 John was a single man.
The Commonwealth War Graves Commission have his records showing "No Next Of Kin". This is not an uncommon entry and several village men are likewise recorded. After the war, letters were sent to the homes of the fallen. This would state place of burial etc., and invite the next of kin to submit a text to be included on the headstone. To many, the form filling and the pain, was more than they wanted, so they declined to answer.
When no reply was sent, the records were marked as "N.N.K." Sometimes men may have declared no next of kin at the time of enlisting, in the same way that others chose to serve under an assumed name.
John C. Clark is commemorated on the Eton Wick Memorial and on the Eton Church Memorial Gates and he was possibly Eton Wick's youngest fatality. 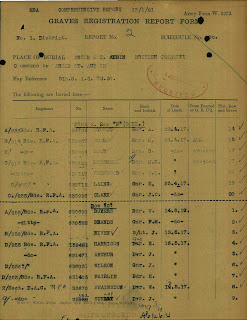 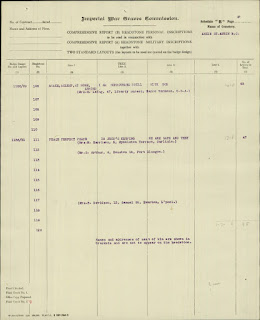 We have discovered very limited further details about John Clark by way of online search. The family tree records by Nicholas Ferrar indicate that John was born on 27th January 1898 in Edinburgh to William Glen and Charlotte Clark. Why the family was living in Eton Wick when he joined the Army has not yet been discovered, but his father, William is recorded as a pupil at Eton College in the 1881 Census living in a House in Keats Lane.

Email ThisBlogThis!Share to TwitterShare to FacebookShare to Pinterest
Labels: 1910's, Remembering the fallen, Their names shall be carved in stone, War Memorial, WW1