Tough Assignment - A Chapel of Their Own 1886

At first Mrs. Annie Tough met with considerable opposition from the owner of the land; she was after all in no position to offer a fair price for a plot, however small. There were no rich patrons offering a hundred guineas or more as there had been when St John the Baptist's Church was built, and however dedicated the band of Methodists, they were few in numbers. We know the names of only a handful of them - John Moore, Ada Moore, John and Emma Lane Mr & Mrs Thomas Green and Henry Goodman. Annie's father had left Rotherhithe and bought land in Boveney New Town on which were built Snowdrop, Primrose and Shakspear Cottages. He and his family lived at Primrose Cottage. Annie's younger sister, Ada, already an adult woman, also came to live in the village. John Lane was a master builder who, after being widowed, had met and married a member of the Maidenhead Church and was thus brought to Primitive Methodism. Henry Goodman came from Dorney where his family had been prominent Primitive Methodists since the 1850s. No doubt these and other loyal workers supported Mrs Tough to find a site for the chapel, but it was she who finally wore down the resistance of James Ayres, the developer. As a businessman he was far less impressed by her ardent Christianity than her sheer persistence! At long last she 'obtained from him a conditional promise that if a certain gentleman effected a purchase of land that day she should have a site for a chapel.' The sale went through and he kept his word. 'I give it to you', he said, 'as a reward for your perseverance'.

The stage was now set for the next great effort - raising the money to build the chapel. The land was a gift, though as Mr Ayres had refused to give it to anyone except Mrs Tough, it had first posed a problem, solved in the end by the property being invested in her as Trustee. The cost of the building was only to be about £300, not a great deal even in those days for a church, but a considerable amount for the Primitive Methodists of such a small community to find. But find it they did, and in a very short time there was sufficient money guaranteed for the work to begin. 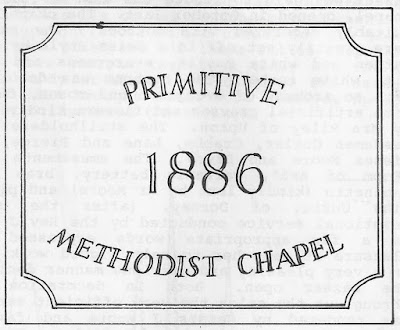 It was a proud moment that first Sunday in October 1886 when the chapel was at last officially opened. We can still see the building with its yellow bricks, porch, and arched windows, and its inscription 'Primitive Methodist Chapel 1886.' From Alma Road it looks very much as it did a hundred years ago. No doubt it was viewed with immense pride that day, but no records survive to tell us the details of the occasion. Imagination must paint the picture of the congregation crowded into the tiny chapel - Mrs Tough supported by members of the Moore family, John Lane, skilled tradesman and foreman with Henry Burfoot (who built the chapel), village and circuit members of the Methodist Church, as well as many other well wishers from the neighbourhood.
In spite of the rain the meeting held the next day attracted a good congregation. It was a circuit as well as chapel affair and Mr Lodge of Maidenhead acted as chairman. Addresses were given by church members from Maidenhead, Dorney and Slough as well as by John Lane of Eton Wick, who was the chapel treasurer and one of the eight trustees. This was a time for congratulations, a time for appraisal of successes achieved - and the work yet to be done. No doubt the speakers talked of the spiritual life of the chapel, but it was the more practical considerations that the local newspaper reported. over £130 had already been raised towards the building fund, but a further £145 was still required to clear the debt.
The Eton Wick History Group is most grateful for the kind permission given by the Eton Wick Methodist Chapel to republish this history, Tough Assignment on this website.
Posted by Steve Denham at 06:00