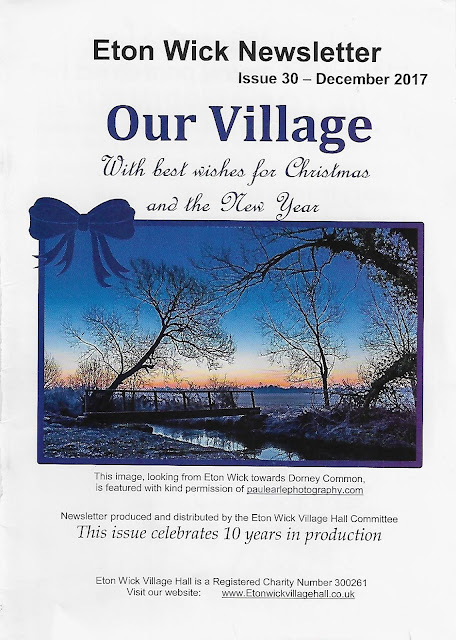 Yes, this issue of 'Our Village is number 30 and marks the tenth anniversary; but It was born of an Idea In 1949 that this rural, post WWII village should produce a 'one off magazine of Eton Wick news. It was named 'Our Village' and was in fact produced again In 1950. Those two earlier Issues were produced by duplicator and sold at six pence (21/2p today's currency). Articles covered The Village Hall; post war village development; sports; youth club; poems etc., All of course much influenced by the gradual return to normality after the long six years of war and shortages.

To mark our anniversary we have selected one of those earlier items:

When I first came to Eton Wick I was told by a man from Windsor that the people of this village were originally those who had flitted from Windsor because they could not pay their bills. I am sure this Is a libel, but if it Is true, then it happened a long time ago, for there was undoubtedly a settlement here in Saxon times, and some Saxon customs are still in use today. Early records are few, but as Canon Shephard tells us in his book 'Old Days of Eton Parish' many of the local names are from Saxon origin. Shot, butt, ward, croft, weir, all these are Saxon terms. 'Wick' is a hamlet, 'ton' a village surrounded by a palisade, (in this case no doubt the river) and leyof is an island. Eton (Ey-ton) therefore means the island town. Bufan means 'above' from which the name Boveney is derived, and Domey comes from 'Donna' which means bumble bees, and Is the bumble bee island (Has anyone been stung lately).

What was the place like in those early days? We can form some idea, in spite of the scarcity of written evidence. It was certainly much more thickly wooded, for later, when the Domesday Book was written In 1086 it is said that there were woods and copses to feed 200 swine. The river must have been very different then, for there is evidence that the main stream has considerably shifted its course, and in those days it was probably several intersecting streams flowing round a number of islands, on the largest of which Eton itself was founded. Salmon and Lampreys were among the fish caught and trapped, and eels were plentiful. Domesday Book mentions 1,000 eels (in Mill Pool at Deadman's Hole).

We know that the Manor of Eton belonged to Queen Edith who was the wife of Edward the Confessor and sister to Harold who was killed in 1066 at the Battle of Hastings. She would probably have had a Steward or Reeve to safeguard her interests. Doubtless many a basket of eels, many a fine pig, horse or sheep, together with honey from his wife's bees, and butter and cheese from their dairy would have had to find their way to the old Saxon Palace at Old Windsor. A Hayward would have been appointed to safeguard the hay crop and care for the cattle, and disputes would have been settled at a Court Leete before an open Jury.

This Court Leete was revived by Eton College in January 1947, they, having acquired the Manor Farm at Eton Wick and with the rights of the Manor of Eton. The temporary bailiff, Mr Bob Bond, swore in the jury who then confirmed him in his office and Mr John Pass was then appointed Hayward. Various matters of dispute were settled regarding the upkeep of hedges and ditches abutting on the Commons, and the number of cattle to be grazed. Long Common and Little Common and the Common rights which entitle households to graze an agreed number of cattle are still jealously guarded from these early days.

Lammas rights come down to us from the 7th Century and have undoubtedly saved us from a lot of indiscriminate building. Lammas Day was the first day of the grazing season after the hay crop, and the name is derived from Loaf Mass or Bread Feast. In Saxon times the day was kept as a day of thanksgiving for the first fruits of the harvest. It is interesting to see Mr Tom Bond and his family working their land by the Eton Wick Road and to think that the organisation of the fields retains a link with the past which has been unbroken for the last thirteen hundred years.

The above article is printed exactly as it first appeared sixty seven years ago, and perhaps reflects the old rural interests of that time, and the more active relevance of Lammas. Probably John Pass was the last of so many Haywards, and although Bob Bond may have been succeeded by other Bailiffs It is not considered necessary for us to know, and we for our part do not consider it necessary to enquire.

Long Common is variously known as The 'Great' or Eton Common and reaches from Eton's Common Lane, through the village to the two bollards approaching Bell Lane. Little Common is quite separate and approximately 300 plus metres north of Sheepcote Road, (by the Motor Museum). The land worked by Tom Bond was the large South Field opposite the Church of St. John the Baptist. He only had the land In the early post WWII years and used it to grow currant bushes and fruit trees. Neither of course acceptable had it been Lammas designated land. The land was later sold to Eton College and is now mainly mono cropped.

*Deadman's Hole is perhaps last shown on local maps of the pre 19th Century. It was situated close to the water course we know as Cuckoo Weir and Just north of 'Chinese' or 'Long Bray Bridge'. Often In river terms a 'hole' indicates the area Immediately down stream of Eyots (Islands) or promontories. I.e. Boveney Hole is just upstream of Boveney Church and Andrews Boathouse.

Florence Wilson was a very good Councillor of Eton Urban in those post war years and helped influence the present day larger 'Eton Wick'. She was on several village committees from Village Hall, Women's Institute and Treasurer of the Youth Club. She also wrote plays using the pen name of Ivy Brides, an adaptation of her maiden name Florence Ivy Briddes. Lammas lands and Lammas law must still be relevant today, but with a much changed residency in old Eton Wick, together with the loss of most active farming, apathy has replaced the diligent adherence to all things Lammas or Commons.