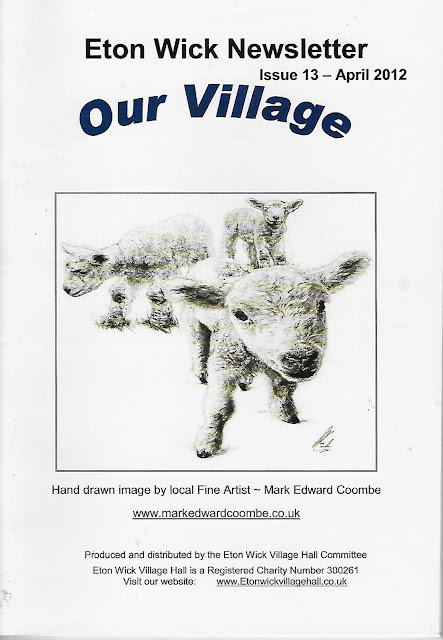 The Way Things Were

During a recent tidy-up of files and folders on Eton Wick I came upon a listing of organisations; groups and clubs dating back to the early 1800's. Part of this list was the work of the old Eton Urban Council — pre 1974, and part of it we produced in the 'Pictorial History of Eton Wick' book published in the year 2000. There are now quite sixty groups etc; on the list, and I do not pretend the list to be complete. Many may pose the question of how they originated and what caused their demise. Others may need to reinvent their title to be acceptable in today's world. This of course includes a 'Minstrel' and a 'Black and White' Minstrel group which were Eton Wick concert parties before and after the Great War of 1914 -18. Perhaps there was a social need for concert groups after the family disruptions of wars, because after the Second World War 1939 — 45, the village again had concert groups such as "The Unity Players" and "The Shoestrings". The need to raise funds also prompted some of these groups, as it did with the annual Scout fetes and gymkhanas; the Village Hall fetes, and 'The Wicko Carnivals'.

Looking at sports groups, the first mention I have of a local club is the Eton Excelsior Rowing Club dating back to at least 1826. Sports in the village did not really feature before the 1880s - around 1882 the first mention of a village football club and 1889 when the cricket club originated. Both clubs played their home fixtures on the common, there being no recreation ground until 1904. Undoubtedly there would have been some local opposition to the common being used on the grounds of Lammas misuse.


Both the Eton Wick and the Eton Recreation Grounds were purchased with accumulated funds accrued principally with the Great Western Railway compensation for the loss of Lammas rights when the viaduct was built around 1846. Eton Wick's ground, opening in 1904. Not until the village had a recreation area could it really be feasible to have regular organised sports, although it is doubtful if the small population could have fielded team sports much sooner.

The first organised group mentioned is dated 1811. Not sport and not recreation but a 'Friendly Society' at the Three Horse Shoes, which lasted for at least 12 years. This was believed to be the first of various support motivated groups, although with the low wages of that time, probably not affordable to all. It cost five shillings (25p) to enroll and a monthly payment of one shilling and nine pence (9p). In return there was a weekly payout of ten shillings and sixpence (52p) in times of sickness, for up to six months, reducing thereafter. The other pubs later introduced similar schemes which in one form or another existed until the mid-20' century; after which time the state ensured social security, and the said 'Slate Clubs' or 'Didtem Clubs' as they were known, went into decline. Other groups of a 'support' nature included 'The Temperance Guild' c. 1884; 'The Mother's Union' (1902) and the Infant Welfare 1915. Sped groups were Football c.1882; Cricket 1889; Rifle Club 1899; Harriers 1907; Tennis Club 1930; Badminton P.T.A. c.1960; Indoor Bowls 1991 and The Nomads 1949.

The Nomads were a cycle camper group of youths within the Youth Club, and the name was that used for registered membership within the Camping Club of Great Britain. They existed for about four years and cycle camped to the coast; the Isle of Wight; and twice toured the Cornish Coast — the West Coast, Land's End, Lizard, Plymouth and the coast home. In 1952 they toured an area in North France. Youth Club ages were appreciably different at that time, with all members being aged 15 — 21. Before we look at more village youth groups it is appropriate in this Olympic year to mention the Harriers Club of 1907. The following year of 1908 the Olympics came to Britain, and a villager competed in the marathon race. The 26 mile course was Windsor to London and the runner was Edwin Stacey, the second youngest son of the 'Shepherd's Hut' landlord. Incidentally our bird man, Bill Stacey, is a relative.

Of the Rifle Club it is claimed they had some very good competitors and in fact qualified tocompete at Wisley. Unfortunately they were not a good match for the other teams who were using Vernia sights on their rifles, which the 'Wicks' team had no experience of. Both the Harriers and Rifle Club had the support of the village benefactor, Edward Littleton Vaughan, who gave his time and generosity to Eton Wick and in particular to its youth. He promoted a young men's club in the redundant old school building and when in 1903 the site and building were purchased for a shop he made Wheatbutts Cottage and orchard available to the Harriers and Rifle clubs, meanwhile giving the site and building for the Village Hall (then The Institute) that we still take pride in today. It is believed Mr Vaughan was Eton Wick and Boveney's first Scout Master. He certainly had the village group at summer camp near Weymouth at the outbreak of the Great War of 1914 — 18. In 1935 at the age of 86 he started a boys club in the village. His club leaders were a local guards' sergeant and Mr Les Moreby. Unfortunately the club closed after two years when Les left the 'Wick' to take up an appointment as Boys' Leader in the newly opened and nationally prestigious Slough Community Centre.

In 1939 came the war. Our village hall was taken over for evacuees and classrooms; the recreation ground was ploughed and used for cereal growing; there were complete blackouts and many men went into the war. Others not enlisted for health or essential war work reasons all had to take on other duties such as Home Guard; Fire Service Wardens; Air Wardens; or Messengers.

Consequently, many clubs and organisations fell into decline; some never to recover. One such being the Tilston Tennis Club. Their courts were behind the village hall on the exact site of todays' large youth club games hall. After the war the youth club attempted to repair or replace the rusted and dilapidated court fencing; all to no avail. There had been allotments between the courts and the Boveney Ditch (south side of the Rec') and these were vacated in the 1950s. I presume the vacation was influenced by the building of Princes Close on the Brewers' Field c.1953-4.

Youth groupings very much included Boy Scouts; Cubs; Guides and Brownies - the uniformed groups. These were quick to establish after the war and of course much aided by having their own hutted quarters in the N.W. comer of Wheatbutts orchard (now Wheatbutts estate). Sadly arson destroyed most of the Scouting records/photos etc., in later years.

Socialist Britain in the post WW2 years established Advisory Committees to oversee youth services. Locally the committee found little to do in the Eton Wick scouting set up, so concentrated on the youth club, as a mixed sex organisation. In the first five years the club had full time paid leaders that could be barely justified in a time of post war austerity. By 1951 this had changed, and I was appointed the unprofessional club leader, receiving nine shillings (45p) an evening as recompense.

There have been other youth groups in the village run by the Church of St. John the Baptist and the Methodists. Later the Catholic Church formed a group of 'Charlie's Angels' but as is the modern trend, for a younger age range. In my youth the Sunday Schools were a big issue in the village, but I think perhaps the main reasons were twofold. Firstly, families were large and it was convenient to know where the children were on Sundays, and secondly the 'Sunday School annual outings'. There were no family cars, so without an outing we rarely left the immediate neighbourhood. Before charabancs and coaches the annual outing was to Burnham Beeches and transport was by coal cart. The horse drawn coal carts were used because they had low platforms, suitable for the coal merchants easy lifting on his back.

The Methodist Chapel were the first to use motor coaches to the seaside. This was around 1932-3. Oh! how we envied them, as most of us had never seen the sea. Within two years St. John's had matched the chapels' coast trips, so we were then able to argue the merits of which was best.

Many villagers of eighty plus years ago would never have gone far beyond where their legs would take them, and undoubtedly the initial attraction of young men volunteering for war in 1914 had more to do with the thought of seeing France and Belgium than the mortal conflict. Social groupings in Eton Wick included The Working Mens' Club, 1890's; The Sisterhood early 1900's; The Womens' Recreation Club c.1925; The Over 60s Club c.1950; Young Wives Group c.1940's; The Mens' Club c.1930's and The Ladies Club c.1960.

There are two entries under music. The Fife & Drum Band c.1890 and The Crusader Skiffle Group c. late 1950's. There are several others, some still exist today. Perhaps the latest is The knit and natter' group held at the library. Not all the groups have had a mention as I have to keep an eye on the magazine space I can reasonably use. Perhaps as a last thought I should say that football had just one mention but there have been at least five different football clubs and probably more.