John Denham, the treasurer and archivist of the newly formed Eton Wick History Group in 1992 undertook a research project to understand how World War Two affected the village and surrounding area. His findings were published in a very small number of copies in 2001. The book was researched, written, typed, designed, printed and bound by John himself and the text was proofread and corrected by Mary Gyngell.

The acknowledgments give an indication of the scale of his project:

Today is the 80th anniversary of the Munich Agreement and we start our serialization of Round and About Eton Wick 1939 - 1945 with the introduction entitled 1938. 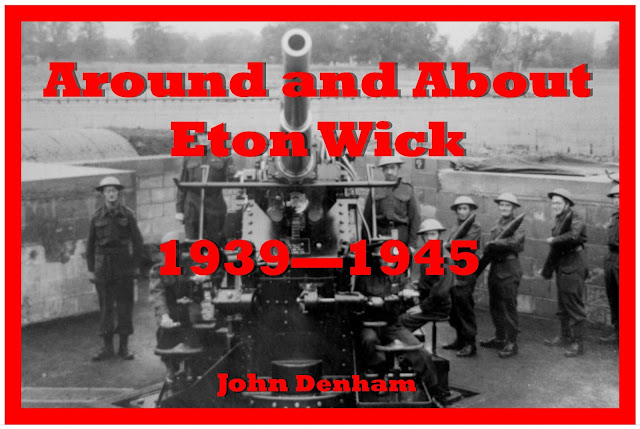 Following the excitement of George VI’s coronation in May  1937 caused by the abdication of his brother Edward  VIII, disturbing reports appeared in the papers of German participation in the Spanish Civil War. Cinema newsreels were showing the German aircraft of the Condor  Legion bombing Guernica inflicting a horrific loss of civilian life.  Within Germany, non-Aryan nationals such as Slavs and Jews, who had been condemned by Hitler as an inferior race, were persecuted and hounded. Marauding Nazi gangs smashed Jewish businesses forcing many Jewish families to flee Germany whilst others were arrested and sent to concentration camps.  Germany, ignoring the peace treaties of the Great War, increased her military capability and by the summer of 1938 became a threat to the peace of Europe.

The Government of Prime Minister Neville Chamberlain announced in 1937 that air raid shelters would be built in all cities,  this was followed in January 1938 with the announcement that children would be fitted with gas masks. This was followed in  July with an order for 100 Spitfire fighter aircraft to Vickers Supermarine.  New aircraft shadow factories started in 1937 were nearing completion and tooling up began for production of fighter and bomber aircraft. The Hawker Aircraft Company received planning permission from Slough Council to build a factory at Langley to produce Hawker  Hurricane fighters production of which commenced at Langley in 1939.  The  ARP and other Civil Defence Services were also expanded local recruitment of  ARP volunteers in Eton, Eton Wick and Dorney had a strong response. The volunteers undertook training in demolition, decontamination, first aid and general anti-gas work, having gone through the gas chamber at  Slough.  At the Eton Fire Brigade sports in August, the presentation of badges and broaches to these early ARP volunteers took place in connection with their work in the scheme.   Preparing for the possibility of war with Germany, the government re-introduced conscription in April 1939  for 20 and 21-year-old men to the armed forces.  Such was the European political situation that there was little public opposition to the announcement.
Adolf Hitler having been elected German Chancellor 1933 took the title of ‘Fuhrer’ in 1934.  During  1938 he annexed Austria unopposed.  This was followed by his demand to annex the German-speaking parts of Czechoslovakia. A deal signed in Munich September 1938  with the British Prime Minister, Neville Chamberlain, gave in to Hitler.  On landing at Heston Airport Chamberlain made great play of the deal, waving the document and declaring that peace was assured.  One month later, German armed forces marched on Czechoslovakia.  By March of 1939 German forces had occupied the whole of the country. Britain and France had pledged to defend Czechoslovakia but no action came forth until September 1st, 1939 when German armed forces invaded Poland.

Email ThisBlogThis!Share to TwitterShare to FacebookShare to Pinterest
Labels: 20th century, Local history, Round and About Eton Wick 1939 - 1945, WW2