The 1930s were a decade of change. Mrs Annie Chew, in place of her aunt, became joint society steward with her husband, Archibald Chew. They brought to the role their own ideas and a loosening of the reins. Such changes, however, were over-shadowed locally by the plans for an extension to the chapel and also nationally by the Methodist Church Union and the publication of 'The Methodist Hymn Book'.

The first steps in bringing to fruition Mrs Tough's dream of a larger schoolroom were taken within a few months of here death and in January 1931 it was decided that 'rough plans and an estimated cost' should be obtained by Mr Chew as soon as possible. By September the Circuit Committee was able to give the necessary permission for a fund to be set up and early in 1932 the Tough Memorial Fund was launched. It was a large undertaking for so small a Society. Membership was only about twenty and much of the money would have to be found from outside the chapel.

Meanwhile another problem had to be faced - the need for new trustees. Of the original eight appointed in 1886, only three remained. James Leaver and Robert Kirby, both elderly men, asked to be allowed to retire. It was decided that in future there should be twelve trustees, and in January 1933 eleven new ones were appointed with only Jessie Wilkins continuing in harness to give continuity to the Trust. Both Mr and Mrs Chew became trustees with Mr Chew the new secretary and treasurer.

The important change which took place in 1932, however, was the union of the various Methodist Churches. The Primitives had broken away from the Wesleyan Church in the early 19th century over their evangelical preference for open air services, or camp meetings. Now some hundred years later such differences were being resolved and the Windsor and Maidenhead Wesleyan Circuit and the two Primitive Methodist Circuits centred on Maidenhead and Slough (previously Windsor) became one Methodist Circuit. Eton Wick was no longer a Primitive Methodist chapel, and in the wake of the amalgamation came a re-organisation in the running of the society. It is difficult now to separate these changes from those brought about by the death of Mrs Tough and the end of her autocratic rule, but the appointment of Mr Frederick Styles and Miss Winifred Jewell as poor stewards was an innovation taken from the Wesleyan Church. The annual meetings of the trustees were now more formal affairs with minutes being taken, and class leader meetings were begun. Mr and Mrs Chew were clearly the central figures running the chapel, but other members were also taking more responsibilities.

The Society, however, was still very small, with less that twenty five members at the beginning of the decade and only twenty nine at the end. But in spite of this there were over sixty children on the Sunday School roll. The little schoolroom on the other hand could only seat comfortably about a dozen children, and most of the classes had to be taught in the chapel itself. A new schoolroom was badly needed.

The first appeal letters were sent out in 1932. A concert was held in the village hall in June and throughout the year subscriptions and promissory notes trickled in. The fund grew slowly, and it wasn't until January 1934 that Mr Cooper of Langley was appointed architect. By April tenders had been received from three building firms - but with these the blow fell. All three were much higher than anticipated and any decision to proceed with the plans had to-be deferred until more money could be raised. The fund had started with a legacy of £90 (£100 before tax) left by Mrs Tough, but even counting this the total amount collected was woefully far below the £390 of the lowest tender. Indeed, a month later when Mr Chew filled in the official application form for permission to enlarge the chapel, no more than £190 had either been received or promised. To the question as to what other money was likely to be received from subscriptions and public collections, he could only answer 'uncertain'. As to whether any other amounts were expected he simply wrote, 'Hopeful and trusting that financial help will come'.

It was obvious that greater efforts would have to be made and over the next year Mr Chew was to write many more letters appealing for help. Sales of work, buffet suppers, socials and house to house collections all boosted the fund. The Manchester and London Extension Committee indicated that it was prepared to make a grant, and the plans were altered to comply with their suggestions. New tenders were received and in June 1935 that of Mr Miles, builder of Eton Wick, was accepted. A sub-committee with powers to act was formed and at last, on June 18th, the contract was signed. Building could now begin.

After the five-year struggle to raise the money it took only three months for the extension to be built and the main arrangements for the lighting, heating and furnishing to be completed. It was in fact more than a mere schoolroom. The architect's plans included a kitchen, two toilets and a meeting room labelled the main room. The whole building was dignified with the title, 'The Tough Memorial Hall'. 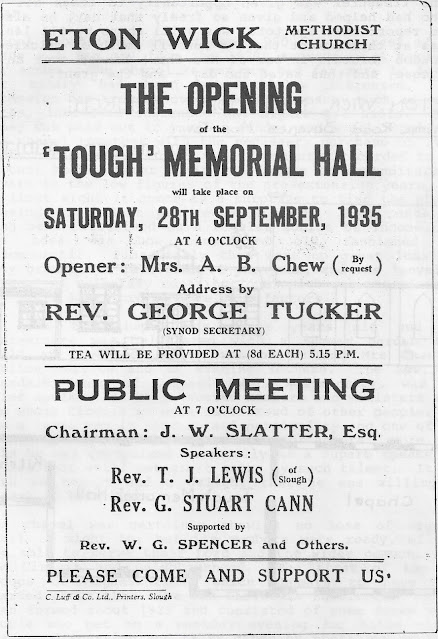 The Hall was officially opened at 4pm on 28th September 1935. The dedication address was given by the Rev. W. George Tucker, Synod Secretary, but it was Mrs Annie Chew who performed the actual opening ceremony by unlocking the door of the new Hall. After the service, tea was served in the Hall and a public meeting was held there in the evening. Both the local newspaper and the 'Methodist Recorder' reported the success of the occasion making much of the fact that the Hall had been opened free of debt - or nearly so. It had cost just over £519 but on the morning of the 28th, £56 was still needed, and this had to be raised before the end of the day if the chapel was to qualify for the remainder of the grant from the Manchester and London Extension Committee. Collections from the service and the profits from the tea had done much to reduce the outstanding amount, but when the treasurer was given opportunity to thank all those who had helped and given so freely that day, he also had to report that the total was still short by £11 14s. It was at this moment that Mr Russell Smith of Cricklewood, London (brother-in-law of Mrs Chew) handed over an open cheque, and thus saved the day --and the grant. 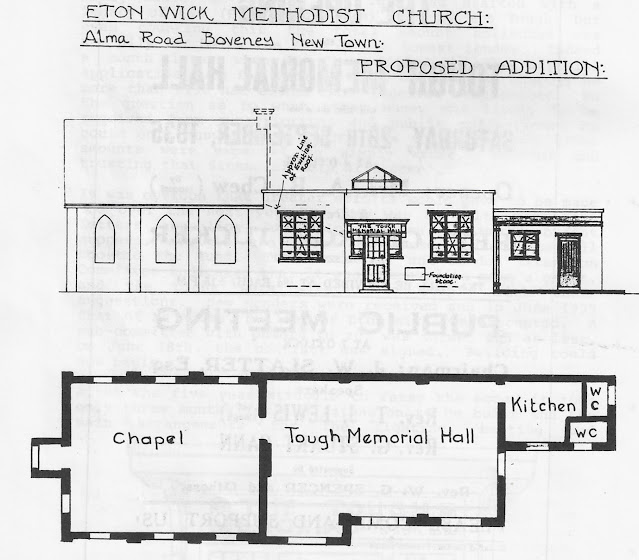