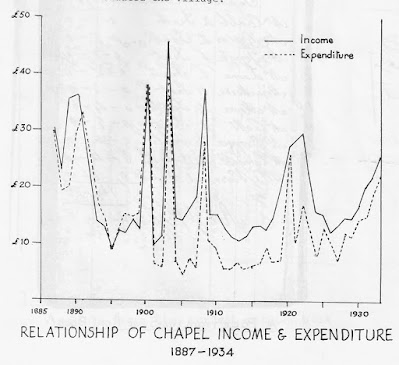 Money matters dominate the early records of the chapel. The account book shows that there
was an income of almost £160 in the first year. The money came from special collections taken at the stone laying and opening ceremonies, donations, profits from teas and collections made outside the meetings and services by chapel members such as Mrs Tough, Mr Goodman and Mrs Lane. Of the 69 people who gave to the chapel this way, 62 made their contributions through Mrs Tough. By this simple statement in the account book we catch a glimpse of the energy and dedication of Annie Tough which was to characterise her contribution to chapel life for the next fifty years.

Hers, however, was not the only effort and there were many helpers at the bazaar held over three days in December. The event merited a whole paragraph of description in the Windsor and Eton Express:

'On Tuesday week and the following three days a bazaar was held to reduce the debt of the new chapel, opened in October last. The chapel was suitably decorated with mottoes. The stalls were prettily set off in a Swiss style by pink sateen and white muslin, evergreens and pink with white ruche. The rostrum was decorated with an archway of evergreen and roses, filled with artificial grasses and flowers kindly lent by Mrs Riley of Upton. The stallholders were Mesdames Cutler, Crabbe, Lane and Pierce, the Misses Moore and Davey. The amusements were 'Room of Art', galvanic battery, bran tub, cabinetto* kindly lent by Mr Moore) and piano. Miss Curie, of Dorney, (after the usual devotional service conducted by the Rev J Lee) in a few appropriate words expressed the pleasure it gave her to help a good work, and in a very pleasing and gracious manner declared the bazaar open. Both in decoration and throughout the sales the very efficient service was rendered by Messrs J Moore and family, J Lane, T Green, J Crook and A Cutler. Through the kind help of many friends in the neighbourhood the profits amounted to £16 1s 2d.'

Few people in Eton Wick had more than a very modest income, and although by the standards of the time, as well as today, this sum was quite a small reward for such a lot of effort, it was the equivalent of half a year’s wages for many a village man.

After this great effort, the subsequent years brought in much less money - an average of only £30 per annum for the remaining years of the 1880s and less than £17 per year in the 1890s.

Donations now were few in number and the income came mainly from seat rents, collections at anniversary services, special collections for such items as 'lighting', profits on teas, the occasional entertainment, sale of 'bazaar articles' and the various small contributions made through chapel members' books. In the last few years of the 19th century only Miss Ada Moore continued collecting, and for a few years the income did not cover the expenditure and the treasurer had to lend the difference.

In spite of this, however, each year £5 or £10 was 'paid off the principal', the £100 borrowed
from Miss (?) Lane to pay the remainder of the builder's bill in 1887. Tables, trestles and such homely items as brooms, teapots and spoons feature in the accounts of these early years and there are fairly frequent mentions of repairs. The clock was mended in 1893 and two years later the harmonium, which had been a gift from John Moore. Oil, wood, lamp glasses and candles were regular items of expenditure, as was the £3 paid each year to the chapel keeper. It was his or her responsibility each Sunday to light the upright stove in the chapel and the school room fire, to look after the oil lamps and to keep the chapel clean, a more onerous task than today for the untarred road was muddy or dusty according to the season. The winter of 1894 brought extra work clearing up after the floods which inundated the village.

Neither the seat rent book nor the account book, the only surviving chapel records from this period, give much indication of the richness of the spiritual life, but a little can be deduced. There were occasional mentions of the Sunday School and its scholars, so dear to the heart and the aspirations of Mrs Tough. A roll book was bought in 1893, and though we can only guess at the numbers on the roll, it was certainly no more than a dozen, for even seated close together on forms, no more than this could squeeze into the tiny back schoolroom. Sticky on hot summer days, it was wonderfully cozy in the winter heated by an open fire. Mottoes and testament cards were purchased and also school prizes, described as 'story books' one year. Oranges - a real treat for most village children - were bought at Christmas, and excursions (Sunday School treats) began as early as 1890.

The Eton Wick History Group is most grateful for the kind permission given by the Eton Wick Methodist Chapel to republish this history, Tough Assignment on this website.
An example of a cabinetto being played can be found on YouTube.
Posted by Steve Denham at 06:00