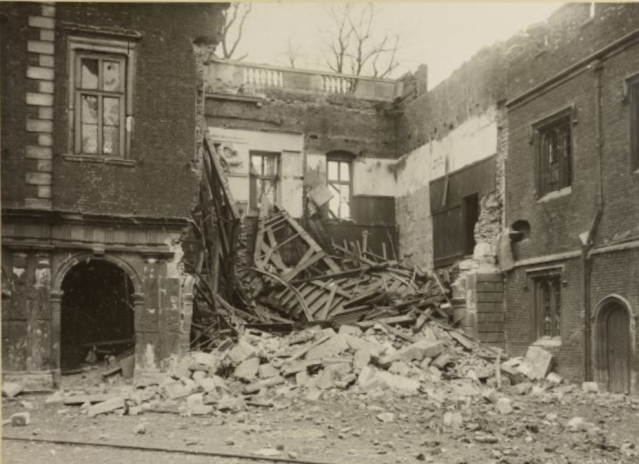 At about 8 pm. bombs fell on the G.W.R. goods yard at Windsor. Damage to coal wagons scattered timber, coal and trucks over a wide area. One wagon thrown into the air was propelled with its contents onto the roofs of the neighbouring buildings. Shops in the Goswells and Bridgewater Terrace, Windsor were damaged, also windows in Thames street were shattered by the blast. Two bombs fell on Eton College buildings, one on Savile House in Westons Yard, the home of the College Music and Choirmaster Dr. Henry Ley. The other bomb fell just outside the entrance to the Headmaster’s room. This bomb was of delayed action, its presence not being discovered until several hours later. The first bomb exploded on impact causing severe damage to Savile House, one of the finest college buildings. It was fortunate that Dr. Ley had been detained on some minor business which had delayed him going to dinner as the dining room was completely destroyed.

Two residents of Eton Wick, Eva Bond, and Mr Cox were at the college during the evening. Frank Bond describing the bombing said his sister Eva was employed by Dr. Ley as a servant and was working at Savile House that evening. Several bombs had dropped around the district but on hearing of the Savile House bomb I cycled furiously to Eton only to be forbidden to venture past college corner. Unable to get any information as whether there were casualties, I return home to Eton Wick. Long after my returned Eva, covered in filthy brick and plaster dust with matted hair came home in a very disturbed state. Also in the house was a young girl evacuee who, fifty years on, wrote to Eva recalling memories of the night of near disaster (Frank Bond)

Reporting later on the bombing of Eton College said that a high explosive bomb had fallen in the front garden of Savile house, residence of Dr. Henry Ley, the College Presenter. Adjoining property was damaged and windows were broken in in the buildings in Westons Yard. Fire also broke out in Savile house. Sometime later a time bomb was discovered by Mr E. Bendell, the school clerk, outside his office in the colonnade. After the alarm was raised, staff salvaged many valuable papers, books, and important records. Everyone in the vicinity were evacuated. Later when the bomb exploded stained glass windows in the chapel were broken or damaged. Damage was also sustained to the school office, the roof, and an outside wall of Upper School. Upper School built in the reign of Charles II by Christopher Wren had the names of many Etonians carved on its walls and efforts were made to collect as many pieces as possible with the view to restoration later.

Mr Cox was doing fire watch duty that evening at Walpole House, where he witnessed the following incident involving a boy who had gone for extra tutoring to another house. Returning late from this tutorial after lock up, he found his House Master, H.K. Marsden, waiting in the boys’ entrance as he entered. Within Mr Cox's hearing, the boy was given a severe dressing down. He was covered in dust but just replied “I have just had a very bad shock, Sir”, which was putting it mildly for he was on his way back and just passing the Memorial Hall when the bomb fell in Westons Yard demolishing part of the Music Master’s house and school office near the Chapel. Needless to say that once it was realized what the boy had been through he was taken care of. Mr Cox said how much he admired the young boy for the way he handled his ordeal. (Daphne Cox.)

Chapel. Needless to say that once it was realized what the boy had been through he was taken care of; Mr Cox said how much he admired the young boy for the way he handled his ordeal. (Daphne Cox)

Evacuated to Eton Wick, George White remembered vividly the night Eton College was bombed. "I was cycling home in the dark from the cinema at Slough; suddenly, when about a half a mile from Eton, the air raid siren sounded and within a very short space of time huge high explosive bombs fell in the direction of Eton. I threw myself into a ditch at the side of the road and after possibly a minute I looked around me and saw dozens, maybe hundreds, of incendiary fires from incendiary bombs all across the fields and in the roads etc. (George White)

The unexploded bomb (UBX) which fell in the College Colonnade caused several difficulties necessitating parts of College to be evacuated and the main road to Slough closed to traffic. Later in the evening the bomb exploded causing much damage to Upper School fortunately there were no casualties. Following the bombing of Eton a letter to A.A. Command from the College Provost expressed the view that the method of A.A. defence was unskilful. There was anxiety that College buildings would be destroyed by the Anti-aircraft guns firing at enemy raiders that were merely passing over head and he was sure that falling shrapnel would cause damage to the buildings as well as being dangerous. It was of no importance where the guns were positioned as long as they did not fire, as the firing of the guns could scare the German pilots into dropping bombs on Windsor and Eton.

Throughout December the bombing onslaught continued on London and other towns and cities throughout Britain. Whenever enemy aircraft ventured over the district came within range the anti-aircraft guns at Datchet, Burnham, Windsor Great Park and Dorney went into action. The barrage of exploding shells and occasionally exploding bombs drove some household pets and farm animals wild. Mrs Miles recalled having to take her dog to the vet to get tranquilizers for him as he would tear madly around the house madly when the guns on the common were firing. Village residents had a fear of shrapnel from the exploding shells causing casualties as well as damage to their homes, but none were ever reported from this source.

During the evening of the 21st. December two high explosive (H.E.) and one delayed action bomb dropped on Kinross's farm in the Windsor road Eton, causing no damage or casualties. The bombs had dropped close to the College tennis courts, one of which exploded leaving a crater 22 yards across; this was filled in with rubble by Alf Cook and Amy Armstrong, the College carters also included from previous bomb damage, utensils from the boys bedrooms. The second H.E. bomb failed to detonate and was listed as an U.X.B. (unexploded bomb). This bomb became the subject of a request from the army to the farm foreman to pull it out with the tractor. His reply in no uncertain terms, told the Army what they might do with it, and for all that is known, it might be still be there - future golfers might get a surprise!. An incendiary device also burnt out the rick yard (Jim Kinross)

A legacy from the late Sir Sydney Herbert, an old Etonian, enabled Eton College to purchase Manor Farm at Eton Wick with all its buildings, including the rights of the Manor of Eton including the Manor and its lands. This completed the package of lands bought by the college in 1929 with the help of the Eton Land Fund. Lands of the farm are scattered over South Meadow, Athens fields near the river and land near to the railway arches. With the requirement of Manor farm and the ownership of the other lands there about, it was professed that the amenities of the surrounding district would be preserved the history of the Manorial Rights and Customs of Eton gives protection as to the use of the Little Common and the Large Common that stretches from Common Road to Eton Wick. A number of fields, including the Eton College playing fields of Mesopotamia, Racket Court Field and South Meadow are subject to Lammas Rights. This gives the right to those freeholders and tenants to graze their cattle on those fields from 1st. August to the 31st. October.

Under the emergency powers given to the County War Agricultural Committees some of the common and lammas lands were taken for arable crops. The demand for food production on the home front became urgent as an increasing number of merchant ships bringing food supplies were lost to attacks by German U-Boats. Conscription and membership of the Territorial Army had taken some farm labourers from the land before it became a reserved occupation. Land Army Girls, Prisoners of War, Service personnel, Eton College boys and other volunteers were employed or gave help on local farms and horticulture holdings in the drive to produce more home-grown food.

Towards the end of the year 262 Battery left Dorney Common to be replaced by another battery and the relieving troops were probably from the London Scottish Territorial A.A. Regiment as the skirl of Bagpipes through the early morning mist is a memory of Peter Morris whilst picking mushrooms on the common.

The pipers were a complete contrast to the Burglar of 262 battery whose reveille awoke those living near to the camp. The change to the so-called skirl of the pipes had Daphne Cox as a child, asking what the horrible noise was. On occasions a column of troops from the camp with the pipers in the lead would march through the village en route to Windsor.

The tented troop accommodation of the Dorney Camp was being replaced with more permanent buildings in the form of Nissen Huts enabling the resident battery to invite the village children to a grand Christmas party. This was due to the kindness of the Commanding Officer, Major Highton, and Captain Sawyer. The party was organised with military precision, each child having a label attached to their coat and arm. The battery chefs laid on a tremendous feast. One child on seeing all the good things to eat declared to the Major, "Sir, I can hardly wait". The N.C.O.s, Officers’ wives and other lady helpers became the waiters for the feast that had been laid out on two large tables. A decorated Christmas tree, Punch and Judy Show and singing with musical accompaniment entertained the young guest. To the sound of Bugles everyone left the hut to greet Father Christmas who arrived by army lorry accompanied by the blackest clown playing a banjo and the children all received a present and a silver coin from Father Christmas.

Air raids on British cities culminated in a heavy incendiary attack on London on December 29th. 1940 and these fires in the City area lit the sky with a red glow that was visible from Slough. The damage wrought to the buildings by the firebombs during this raid brought a Defence Order for men of 16 to 60 years to register for fire watching amounting to forty-eight hours a month. All factories, shops and offices were to station firewatchers to combat the serious threat from incendiary bombs. Men from the village working on the Trading estate were expected to do fire watching at their place of employment. Firewatchers and plane spotters were also stationed on the roof of factories to ensure that as little interference to production as possible occurred during air raid alerts. Warning to take shelter being given to those working when danger seemed imminent. Married men often entices the young single men to do their turn of night fire watching with an inducement of three shillings (15p).