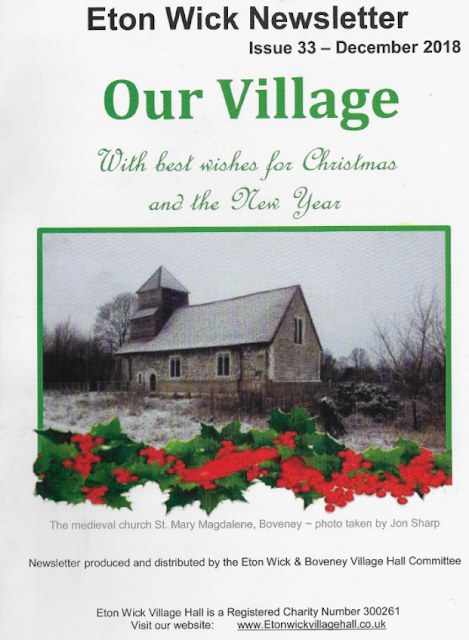 As the year of 2018 draws to a close we are left to reflect on the many reminders we have had of it being the Centenary of the end of the Great War of 1914 - 1918. and the many times we have heard We Shall Remember Them' when of course no living person could possibly remember those who made the supreme sacrifice of that war. In actual tact there are not many alive today who can remember those who came back from that war. Perhaps more correctly we should say We Commemorate their Endeavours'. It was not just the fighting; but the conditions under which they fought and endured that fostered the belief there would never be another world war. What a sad delusion: as of course there was 21 years later. There are now few survivors of the armed forces of that Second World War. In the year 2005 over fifty ex-servicemen and women of Eton Wick attended a very memorable Dinner and Celebration in the Village Hall to mark the 60th Anniversary of the end of WW2. Now at this time of writing. in Spring of 2018. there are only five of that gathering still living among us, and three of those are unable to get about unaided.

All wars are very different and, by the nature of things commanded by men who gained their position by very creditable service in an earlier conflict. Many senior officers of the Great War (1914 - 1918) had been cavalry officers during the late 19th century African wars and found little opportunity in the present static. entrenched and muddy terrain of Flanders. WW2 had none of this. and largely depended on tanks and great fleets of aircraft. Life in Eton Wick and elsewhere changed considerably after these wars. Before 1914 it is doubtful if many local people had ever seen the sea or had a holiday away from home. Probably the majority had never been in a motor vehicle of any description, given that Eton Wick's first car was in 1907 and the first village bus in 1922. Those who did have a holiday would very likely have stayed with relatives or at a bed and breakfast guest house. It would seem that hotels were not considered for working people, probably beyond their means and above their station. Apart from the Hi Di Hi Butlin's Camps it was not until after WW2 that package holidays and air travel became possible for all.

Undoubtedly the necessary wartime advances of aviation opened up this mode of travel to places undreamed of just a few years earlier. Until the late 1920's an annual Sunday School outing for children locally meant going to Burnham Beeches by horse and cart. Although it must have required considerable cleaning. coal merchant carts were much preferred: as the platforms were appreciably lower and larger than other trader's vehicles. Not only were the horses and carts generously provided. but the traders themselves were obliged to give their lime driving to and fro. In many ways neighbourly generosity was more readily given at times when all the villagers knew each other. The slowness of the procession of carts determined the destination; and only after the early 1930's, when motor coaches replaced the horses, was it possible to go to sea resorts.

Pubs also had annual coach outings and usually chose horse race meetings or the seaside; having a half-way roadside stop for a customary drink or Iwo. My father. I think. never did have a holiday or see the sea. He once told me he took time away from his village greengrocery round to go to Sussex to meet his future in-laws. The occasion was too much for him. and he suffered a raging toothache until he returned to Eton Wick.

This period between the World Wars. 1918 —1939, was probably the time most enjoyed by the proliferation of clubs, associations and general participation. Every village had its pub and often more than it needed. Every pub and hall had its piano and every church its choir and bell ringer. Now TVs have ousted the pianos and general car ownership has contributed to the decline of village sports teams, variety groups etc. Rarely does a church bell ring, and if it did I am sure the hum of traffic and the aircraft overhead would dim the 'ding dong'. Sadly, few churches have choirs and Sunday Schools, and yet I still get asked by villagers "have there been any changes?"

I was serving on an RAF station as the Second World War was drawing to a close and, probably as a well intentional scheme to prepare us for the return to civilian life, we had compulsory weekly discussion groups related to appropriate topics. At one meeting we were told there would be more cars and that they would not all be black but of almost any practical colour. What rubbish we all thought, cars, like cycles, had to be black. At another meeting we were told about the new material of plastic: how that too would be any colour, and that even doors and window frames may well be made of plastic. Never, never we mused. One talk involved an officer asking us what we planned to do as civilians; When he asked me I said I thought of going to Australia to forge a new life. The officer bawled me out saying we all had a duty to rebuild our own country. To me it was enough that we had all spent our youth in uniform for the past five years: never thinking that I would return to my birthplace and be content to stay there.

Most of the old ways were about to go, and electricity brought in its wake TV's. music centres. washing machines. refrigerators. tumble driers, central heating and so much more that pre-war women had never dreamed of. Even the simple ball pen. jeans and nylon are all post WW2 products. However, there is usually a price exacted for the gains we enjoy, and surely the biggest price is yet to be felt, as ever more of our younger citizens turn to social media and their mobile phone, in preference to face to face conversing.

Many wartime service men and women actually appreciated amenities never experienced in their old rural homes; shower baths, bathrooms and flush toilets were all new to me and became 'must haves' after the service years. Of course active service and some overseas postings were at best primitive, but now better forgotten.

Certainly, after WW2 and despite its many long-lasting shortages the local emphasis was on home building, and the Eton Wick population more than doubled as the years passed by.

Much of this drive I credit to ex-servicemen who were not necessarily pre-war Wickers' but who came here with a job to do. This must include Jim Ireland who went on to build many of the privately owned houses, as distinct from the Council Estates of Boveney New Road. Colenorton Crescent, Stockdales and Haywards Mead. Council built homes were not entirely a new idea. but on the cease of post WW2 certainly were for Eton and Eton Wick. The first Council houses for Eton Wick (1924) were the eight houses we know as South View immediately west of the relief road bridge. They were allocated to families of ex-servicemen of the 1914 -1918 war. Apart from the Somerville Road houses built for Eton Town in the mid 1920's I cannot think of any more Council homes for the village until 1939 when houses and bungalows were built at Vaughan Gardens and in 1945 the last year of WW2 when twelve prefabricated bungalow dwellings were erected alongside Vaughan Gardens. This now being the site of the shop parade that includes the Pet Shop and Bellsfield Court flats.

A note from Joan Neighbour, the editor of Our Village;

Dear Frank Bond was always one or two articles ahead of me, and this is the last one he had written before he passed away in April 2018.