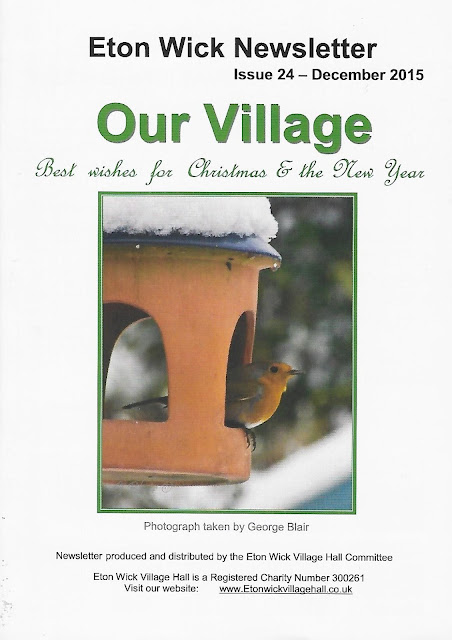 Our Village First School of 1840

Some months ago I attended St. John the Baptist Church for the funeral of a young villager, and was pleasantly surprised when a man approached me and asked if I was Mr Bond, and did I recognise him. My responses were 'yes' and 'no'. He then explained that he was Mr Hampshire, a name I readily recalled as a former Headmaster of our village school. He was apparently living in Wokingham. In truth I regretted not having recognised him, but could not remember having had much contact with him during his Eton Wick tenure. Even so I was much impressed that after thirty years he came back to attend the funeral of this forty one years old man, who I presumed had been a pupil of his so long ago. At this point I can well imagine Eton Wick's late author and historian, Dr Judith Hunter's oft quoted advice -"Frank, in history we must never presume!' - Sorry Judith -.

This incident had me thinking about my own school years of 1927 - 36 which started in the village school until I was seven years old; and then on leaving the infants came the long tramps to Eton Porny School until I was fourteen. This was normal for all the Eton Wick boys, but girls had the option of doing all their schooling in Eton Wick. There were of course no school buses, no school canteen or school meals, which effectively necessitated returning to our village homes for the midday meal, and then a return to Eton and school. Classes were known as 'standards' and we had the same teacher for most subjects for the year. The exception was for woodwork, gardening, swimming and occasional sport. Gardening and singing were the subjects that Mr Frampton, the Porny Headmaster, took charge of. The school had its own site of allotments; situated on the 'Sleds' and just outside the Eton recreation ground west boundary. Even on really hot days the 'head' would not allow drinking at the water pump because in his opinion men never worked as well when they had taken a drink; after 3pm it was acceptable. Rudyard Kipling's famous 'IF' poem could well have added a two line sequel - "If you can't sing, or strive away in your allotment you are never going to be a man my Son".

Other Eton Porny teachers of the early 1930s included Mr Hoare, a firm disciplinarian, which in those days meant use of a cane, either by necessity or perhaps mood. He often had the lads chanting - "Old Conn Hoare is a very good man, he tries to teach us all he can, Reading, Writing and Arithmetic, and never forgets to give us the stick". In todays' world talk of corporal punishment is an abhorrence, but it also did much to deter the big boy bully. Perhaps a price that some tormented youngsters of today would consider worth paying.

Every age has its beliefs until technology makes them outdated. Mr Hoare told us that skyscraper buildings would never be a feature in England, because unlike New York we lacked the rocky ground on which to support them. I am sure there are Londoners who would now wish that was so. Also, that men were hoping to  land on the moon, but of course that would never be, due to lack of air. Again, man wanted to split the atom, but fortunately he could not, because if he did there would be such a chain reaction that the world would not survive. In little more than ten years Nagasaki and Hiroshima knew otherwise.

Probably Mr Hoare was well regarded by pupils on account of his having served and been wounded in the Great War of 1914 - 18. Colin had a silver plate inside his forehead where he had suffered a shrapnel injury. I conclude - must not presume again - that he had volunteered to join the army in the early months of the war. With little more than perhaps heads above the trench parapets there were many such head wounds; until in late 1915 when the steel helmet came into general use. All those serving before this date were volunteers, as conscription was first introduced in the spring of 1916. As a teacher he had several unusual methods. This was a time of much unemployment and like many others he advocated the slogan of 'Buy British'. He would say "My shoes are British made of British leather" - "my pocket knife was Sheffield made", and so he went on. Occasionally he would say "That will do for lessons today boys, you may now ask any question you choose. This was always popular, although on one such session a lad said "Sir, when I go on the common I sometimes see a cow jump on the back of another, why is that?" The quick reply 1 do not want that sort of question."

Other teachers in the early years of 1930 included a young Welshman; Mr Hughes, whose favourite subject was natural history. Beyond any doubt, an enthusiastic teacher quickly imparts his knowledge to willing pupils and we were soon observing the plants and birds around us. Regrettably ho only stayed at Eton a few years before moving on to South Africa. A very unusual move, and certainly at that time when working class just did not travel either for work or holiday. Another young teacher was Mr Birmingham. I think this could have been his first school as he certainly had much difficulty in controlling the boys. I do hope in time he acquired whatever it takes to apply discipline. He was kindness itself, even buying prizes for particular achievement. Most boys wore short trousers until they left school at fourteen years of age. There was no school uniform, although the 'Porny' football team played in chocolate brown and blue, the school colours. Eton always had a good football side, and Mr Frampton was known to say 'all the best footballers came from Eton Wick' - the long walks every day to and from school gave the village lads better leg muscles. He certainly had no cause to include me.

These were turbulent years, as Europe was bubbling over yet again, despite there being only seventeen years since the Great War had ended. Mussolini had sent an Italian invading force into Abyssinia - now Ethiopia - and were reported to have used gas against the natives. Maybe they did, but news reporters have been known to exaggerate or distort facts. In Spain General Franco had opposed the establishment and the country was struck by civil war.

To some extent this resulted in Spanish pupils evacuating to Britain, although I never knew of any living locally. On one occasion Mr Frampton, the 'Porny head, announced that a football match had been arranged between the Eton School and a Spanish boys team. He expressed sadness at their plight and asked for every consideration toward the Spanish visitors. I think he stopped short of asking 'Porny' to throw the match but I got the impression he would be pleased to think the opposition won.

I had left school four years before changes really had an impact. After the third year the country was at war and then came tho change in school status, with newly opened Ragstone Road School drawing all the pupils over eleven years of age. Both Eton Wick and Eton were Church of England schools and of course still are: but I do wonder if present day respects of other creeds results in less imposed influence of our traditional faiths. Apart from a small Dame School in the early nineteenth century there was no school in Eton Wick until 1840 when thanks largely to the enthusiasm of a young Eton College tutor, Henry J Chitty Harper, who was also a Conduct (Priest) and of the Eton Provost (also Vicar of Eton Parish) a site was found, and money raised by donations and subscription for the villagers' first school. It was not large, having just one classroom 29 x 21 feel; brick built and situated at what we today know as the junction of the 'Walk' with the main road. In 1840 there was no 'Walk' road; at best just a track leading to the Greyhound public house, approximately 130 metres north. The pub had only been licenced about seven years earlier, and the village population was less than four hundred.

The site was leased from William Goddard of Bell Farm for the generous sum of ten shillings a year rent; roughly equal to a labourers weekly wage at that time. The building cost £259. Education was not compulsory, but pupils were expected to pay a penny or two where possible. It may not seem much to pay, but with a family of several at school it would have been difficult. Although unwittingly at the time, William Goddard was responsible for the later development of Boveney New Town. In 1870 he sold Bell Farm to Eton Council for their town sewage. As we have seen previously, within a few years the Council sold nine acres of their acquisition as being surplus to their needs, and in only a short while Alma, Inkerrnan and Northfield Roads were created and duly lined with late nineteenth century homes, effectively doubling the population, which soon made the first school of 1840 inadequate, and in 1888 a second larger school was built in Sheepcote, adjacent to the church which was built twenty two years earlier.

Rev. Harper later became the Bishop of Christchurch in New Zealand, superseding Bishop George Selwyn, who had in fact been the Bishop of all New Zealand. Previously both men had been Conducts at Eton together, and both had worked beyond their College remit. Selwyn preached from Boveney Church and in Windsor before going 'down under'. He also rowed for Cambridge in the first varsity boat race of 1829 before going to Eton as a tutor. Both men were larger than life.