The United Kingdom Census of 1911 was taken on Sunday 3rd April, that year and was the eighth of the UK censuses to include details of household members. The total number of persons returned as living in England and Wales at midnight on Sunday, 3rd April, 1911, was 45,216,665. This shows an increase of 3,757,944 upon the number enumerated on 31st March, 1901, and gives a decennial rate of increase of 9.06 percent. The 1911 Census is the first that the forms that were completed by each household are records made available by the National Records Office. Previous Census records that have been released are the books completed by the Enumerators. 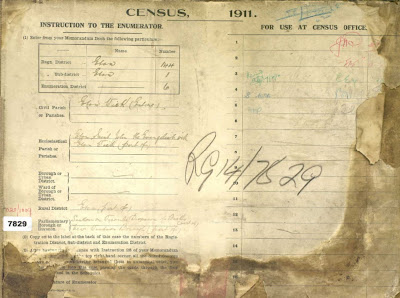 Relationship to Head of Household.

Particulars as to marriage.

The area for the 1911 census included was the entire parish of Eton Wick. There is no further description of the area covered

The 1911 Census reveals that there were 147 households and 527 people in residence in the village at midnight on the 3rd April. The oldest person, Esther Wheeler at the age of 89, she was born in 1822. Her husband, William was 87.  Eda Alice Talbot and Felina Brades were both one month old, there were four children born in the first three months of 1911 within the civil parish of Eton Wick.

Click on this link to see our transcription of the 1911 census records for Eton Wick. We will be looking deeper into what the census reveals about Eton Wick and publish our findings in future articles.