Our Village December 2011 - The Way Things Were 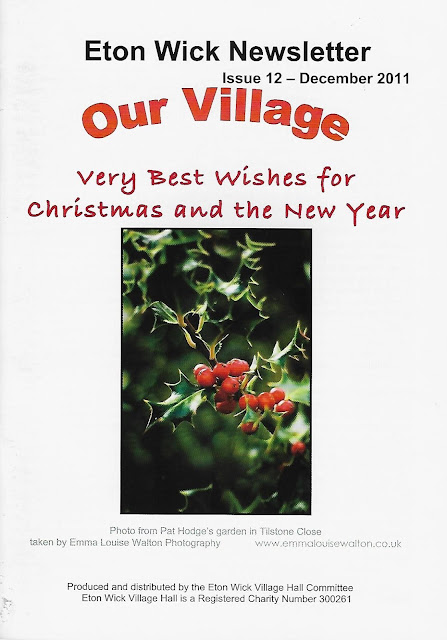 At a time when we are expected to tighten our belts, it may help if we reflect on what things were like in living memory, albeit 70 to 80 years ago.

It was in 1922 that Eton Wick got its first bus. Until then a shopping trip to Windsor involved a tiring and often a wet or cold walk both ways. A few may have had a pony and trap, but there were not many of them in Eton Wick. Some would have cycled, and one well-known man of the '30s told me he walked to and from his work in Uxbridge. Hard to imagine now. 'The blue bus", as it was known, went on to provide a truly wonderful service of three return runs to Windsor's Castle Hill every hour; one of which went to Dorsey and Maidenhead.

During the 1930s to 1960s the bus was often packed with sitting and standing passengers. Particularly later in the day for the cinema runs. Windsor had four cinemas - 'The Playhouse'; 'The Regal'; 'The Empire' and for many years the theatre became 'The Royalty' cinema. Many may remember the cinema in Eton.

Nothing lasts forever and by the 1960s the television had killed off the big cinemas. The bus service fell into decline with the public's ownership of cars, and in the fullness of time the Blue Bus proprietor, Bert Cole, who for over forty years had served the village so reliably in all weathers, retired. His popular drivers included Johnny North, John Bell, Des Sutton, Gerry Austin, Mr. Mitchell, Mr. Lovegrove and of course Bert himself and his son. They often stopped in irregular places for passengers to alight.

Before the T.V. we had the 'wind up' gramophones with their tinny sound-boxes, but it was the 1930s before most homes possessed a wireless set - large, with battery and chargeable accumulator. The very first wireless in Eton Wick was a Cat Whisker's kit assembled by Norman Lane and Bill Brown in the early 1920s. Both men had recently returned from service in the 1914 - 1918 Great War.

Most pubs and halls had a piano, and a customer who could play one probably got free beer and was generally popular. Years later, when the television took pride of place in the bars, the piano became unwanted. This, of course, enabled the Wicko! Carnivals to get pianos at no cost for their piano smashing contests.

In the late 1920s to 30s, there were few cars, and this was evident by the fact that as schoolboys we could and occasionally did, whip tops along the Eton Wick Road on the way to 'Pomy' school. In 1934 a neighbour berated my Mother because King George V's car had been obliged to stop by The Three Horseshoes pub on account of my young brother playing 'golf in the road. Mother's comment was "of course the car stopped, it could hardly drive over them". There was an exception; every Fourth of June we did see many more cars. In fact, not just cars, these were large limousines with their attendant livened chauffeurs. Nothing today is ever quite like that, and of course the 'Fourth' itself is often not on the fourth, and there are none of the sumptuous dinner parties for parents in the evenings.

A little under forty years after the King was 'held up' Windsor Bridge was closed to motor vehicles (1970) and Eton Wick was no longer a possible route into Windsor; sadly neither could buses take villagers into town for their shopping. Castle Hill may not be an obstacle to the fit, but I can confirm it is to the aged and the less than fit.

A little over forty years before that 'Royal holdup' a much smaller Eton Wick got its first retail shop and Post Office. Ada Cottages (48 Eton Wick Road) had been used for retailing for a year or two before Thomas Lovell opened a shop there; with the Post Office; around 1887. He had his own bakery and sold household and garden wares. A photograph shows stacked galvanised baths, wash tubs, toilet buckets etc. These were all items too bulky for carrying from Windsor, Probably one or more of the village's public houses sold some grocery items, and I was told that in the period around the Great War (perhaps 1910 - 1912) 'The Grapes' public house, now a restaurant, sold milk from the churn.

Following the Tom Lovell enterprise five shops were opened using converted dwellings. Additionally, in the early 1900s, Eton Wick got its first purpose-built shop on the original school site at the top of 'The Walk' road. Two of the five were in Alma Road (then in Boveney Newtown). These were both general grocers. Two in Eton Wick old village were not for groceries. One was Welman Cottage (now 62 Eton Wick Road) which had a front extension c. 1910 - 12 and was owned by Bill Hearn for the sale of harness, leather goods etc. In 1923¹, following the death of Mrs. Hearn, Bill became the motor taxi driver, operating from Victoria Road, and the shop became a grocery retailer's and known as Thames View Stores. The name was apt, as it looked out over a low hedge, allotments, and the Recreation Ground to the river. Three doors away; now 56 Eton Wick Road the sitting room was converted to a cycle shop, mainly dealing in 'Royal Enfield' and cycle accessories. This was a few years before the Great War 1914 - 18 and like other village traders the shopkeeper, Ted Woolhouse², tried without success to avoid conscription on account of his business. They did get three or six months deferment but usually denied further appeal. After the Second World War 1939 - 45 the cycle shop reverted to the sitting room. 'Thames View' was a grocer's for 54 years until 1977 when it became an Aquatic shop, until c. 1994 when it reverted back to a dwelling.


One other post-war shop was owned by John and Pat Prior in Moores Lane. This business development at the end of Alma Road's terraced row of Primrose Villas was originally built for, and occupied by, John Moore. He came to the village from Kent where he was a businessman, who followed his daughter, Annie Tough, to Eton Wick. Annie was the wife of the manager of Bell Farm and was the prime person responsible for the building of the Primitive Methodist Chapel. Moores Lane got its name from John Moore. The shop in question was at first petrol pumps and newsagent, opened by Bill Sibley, formerly of the 'Walk'. In 1979 It was sold to John and Pat who established a local grocery shop with newsagents. They closed the shop in 2005 and converted it to a private dwelling for their retirement.

There was another house conversion, in the terraced row of St. Leonard's Place for grocery, newsagents' etc., before selling wool and items of clothing. This shop, I was once told, was the first retailer of ice cream in the village, probably early 1920s. Before the Eton Urban Council built the parade of seven shops in Brewers Field, 1951, the purpose built shop and Post Office on the old school site was almost certainly the main shop of Eton Wick. Inevitably the 'parade' gradually made the other shops increasingly difficult to survive. They changed their usage, launderette, florists, builders' store and workplace, betting shop, motor spares; but alas the days of scattered shops had gone. In 1973 the Council opened the second parade of shops in Bell Lane and one year later the last of the small shops, at 'Thames View' closed.

Probably before any of these shops came to the village there were door to door traders. Certainly until the post-WW2 years such traders still served the community and in the 1930s there were at least five farmers selling their milk from churns on pony and trap. Also daily deliveries included bread, greengrocery, fish and rabbits, with weekly deliveries of coal and bottled minerals. There were less frequent callers such as gypsies selling clothes pegs and props for clothes lines, along with white heather (for luck) and paper artificial flowers — usually carnations. Most of these were made by the gypsy families in winter time. Less reliable vendors included sellers of winkles; muffins and even sticky fly catchers. About once a year a salesman came, encouraging householders to change their daily paper. If an agreement was reached it was necessary to cut out sixty consecutive serial numbers from the front pages and a book came as an award. I still have a gold hardback book of King George VI Coronation and once had a book 'Britain's Wonderland of Nature'. Many of these offers and callers did not resume after the war of 1939-45 and in time, with labour saving facilities, householders were all away from the home in full employment, and it became a waste of time calling.

The last thirty years has seen the supermarkets taking the trade from the estate shops and now with the decline of so many the big stores are themselves opening smaller outlets on the estates. There is always a downside, and I cannot see these superstore outlets ever playing the local supportive role that had become a feature of many local traders.

Eton Wick was perhaps late with some advances but not having electricity until around 1949 — 50 was a setback. That was many years after Dorney. The population had stuck at around 1000 — 1200 for the first half of the 20th Century and rapidly increased with the post-WW2 housing. No longer can we say we know all the residents, and neither do they know us. All very different to the period up to sixty years ago when we had ponds; a blacksmiths' shop; the mayday stampede of the many horses let free to graze the common after having been stabled for much of the winter, and so many other happenings to differentiate village life from the town. We can look back but cannot go back. It would be difficult to think of any improvements that had no downside.

Clickhere to read Our Village December 2011.


Notes
1 - In Oliver Stannett's memoirs he recalled that Bill Hearne sold his shop and started to run a taxi business soon after Oliver had been birched, aged 12. That would have been in 1915 or 1916 as Oliver was born in 1903.

2 The impact of The Military Service Act of 1916 was a concern to small businesses across the country. This guidance published in The Newsagent, Booksellers Review and Stationers' Gazette from March 1917 gave guidance on how to build a case to present to the National Service Department. Just because people like Ted Woolhouse were running a business that depended on them was not an adequate reason to avoid conscription.
Posted by Steve Denham at 06:00