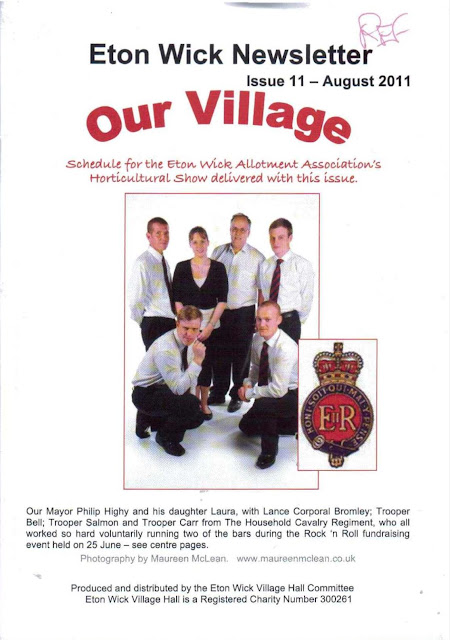 
The day of the fair' was indeed the big day of most rural communities before the ownership of family cars. Eton Wick was no exception, although until about 130 years ago the village was probably not large enough to support regular events.

In 1878 some diverse social gatherings did take place and were considered worthy of recording. Firstly a political rally, and a steam circus, were held on the Common. I find this perhaps surprising, as at that time all villagers' were conscious of their Common's Rights and vehemently opposed any misuse. Again, a surprise that the small population was deemed adequate for a steam circus. Perhaps more importantly in 1878 Eton Wick held its first Horticultural Show, which predated the village recreation ground by several years; the allotments by 16 years and was 13 years before Eton Town's first Horticultural Show. Apart from war years the show became an annual event and with time, became ever more successful. By the 1930s it was the August Bank Holiday event held in Wheatbutts Orchard, often with a Guards' band; outdoor dancing, side shows; various pet classes on show: children's competitions of wildflowers, grass collection, mini gardens. needlework etc., and adult cookery entries of cakes, cooked vegetables, dinners etc. The allotment holders have revived the horticultural show in recent years but alas the days when every villager attended with enthusiasm have long since gone.

We will now look at the biggest of them all, the Wicko! carnivals. held between 1967 - 1981, at how they came about, why they stopped and ask "could they have survived?' The origin was certainly unusual and indirectly came about following the end of the Eton Wick cricket club in the 1960s.

The cricket club was long established; it played home matches at Saddocks Farm, had its own wood pavilion and regularly had very popular fixtures. Unfortunately, a possible move to the village recreation ground brought about the club's demise. They gave the mobile pavilion to the Eton Wick youth club, but unfortunately, village children burnt the building and the youth club duly claimed the insurance money of £600. At that time; and after ten years as the 'Club Leader' I was then its Chairman. The Adult Committee decided against a replacement pavilion but opted for a purpose-built Sports Hall to be built behind the Village Hall. The insurance money was inadequate so we decided to raise the money needed with a Recreation Ground based fete. The word 'fete' had been used by the scout movement and also the Village Hall in recent years so we settled on 'carnival'. That year of 1967 Canada had held an International Exhibition. logoed 'Expo! 67' so committee member Andy Skeels said we will call our carnival 'Wicko 67½'. Success came so we subsequently held 'Wicko 68'; 'Wicko 69' and so on. Publicity was pushed way beyond our locality and Mr. Jim Kinross of Manor Farm generously let us have the entire use of South Field as a free car park for the many hundreds of visitors at one event it was estimated a crowd in excess of 10,000 attended.

Of course events in the arena cost money and being held in the recreation ground no admission charge was possible, so as with the car park the event was virtually free to those not wanting to spend. There were, of course, side shows: fairground stalls and continuous arena entertainment. including music by a Scottish pipe band. a Caribbean steel band and a military band. There were go-cart rides: ladies wrestling: boxing: piano smashing competitions (inter pubs). a lively mock American civil war performed by the Civil War Re-enactment Group plus regular beauty queens and fancy dress shows. Also every year expert tug-of-war competitions. Wicko! attracted tug-of-war teams from far and wide - the midlands, west country and the London districts. With no experience of tug-of-war we were much indebted to the long-established Holyport organiser, Mr Charlie Aldridge, who guided us through the necessary 'know how' We were able to offer more attractive prizes to the teams through the good offices of Mr Stout, a villager who at that time had a substantial Reading based business trading suitably priced chinaware.

Within a few years we were able to build the youth club's sports hall and in a year or two, the carnivals were handed over to the Eton Wick Football Club who themselves needed funds to develop their newly built headquarters. The event probably needed much more work input than had been anticipated and it quickly fell into decline. Just one example was an Eton Council Officer giving his usual warning that he would inspect the recreation ground the day after a Wicko!. As usual, the same few cleared the site and with failing light, the crowds all gone: my brother Albert was driving our shop truck on the Rec and by its headlamps my two aging sisters were on hands and knees picking up the rubbish. Looking up we saw the Club customers with pints in hand looking from the clubhouse window and naturally, we mused they were saying "just look at those ..... fools'. Enough for Albert who said 'this is my last and of course his input had been overwhelming - making props, repairing stalls, painting etc., and always giving us new ideas

Like other village ladies my sisters had spent months knitting saleable items and later making cakes and jams. All these village happenings need keen workers and it is no use dreaming up ideas without the will to execute them.

Could Wicko! have survived? I have always thought it may, but probably depended on a more positive initial approach. I always had the old village pre-war shows in my mind and when planning the first Wicko! I asked Mr Harry Cook, who organised the annual Horticultural Show, If they would combine with Wicko! for a Recreation Ground annual event and in return Wicko! would guarantee the marquee and prize expenses of the allotment event. Harry decided to keep his independence, for which I could appreciate. However, if it had joined with Wicko! there would have been permanence to the show that the 'quick fix' need for money may not have brought about the early demise.

Incidentally, in 1969 the Sports Hall and Wicko! Carnival were opened by the British Heavyweight Boxing Champion 'Billy Walker'. He also judged the many young ladies' Beauty Queen Competition. He chose Susan Lund as the 'Queen' and Kathy Reader as runner-up. Both girls lived in Princes Close, and eleven youth organisations had girl entrants. Some years later both Susan and Kathy were married to the village twin brothers. Tony and Terry Skeels, who were, in fact, the sons of Andy Skeels who had given the first Wicko! its name.

Footnote: To further the family connection, Susan is the Great Niece of Ernie Brown: the 22 year old remembered on the Village War Memorial.