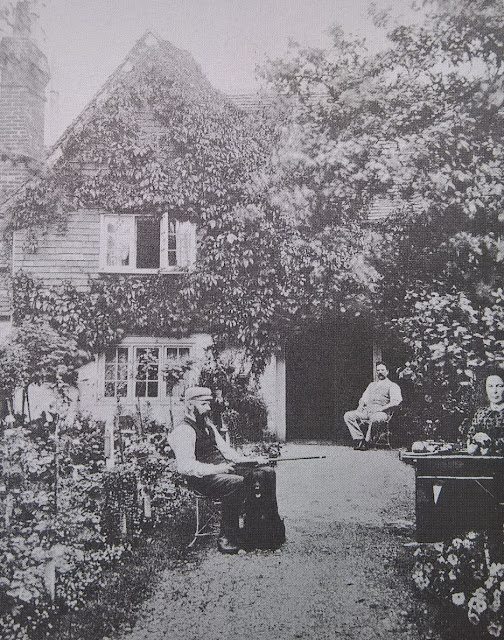 This photograph of Bell Farm House, taken at the turn of the 19th century, shows farm manager Charles Tough with a shot gun on his lap and a black gun dog sitting at his feet. Presumably, the shotgun is pointing somewhere between his wife Annie seated opposite, and the unidentified man seated in the doorway. Charles and Annie came to Eton Wick from Kent. Charles had been appointed by the Council to manage their recently acquired farm, the fields of which were primarily to be used as the Eton Sewage Farm. Annie was the major driving force behind the building of the Methodist Chapel in nearby Alma Road in 1886.

Bell Farm House was the home of several generations of the Bell family, who were major property owners and farmers in and around the district during the 16th and 17th centuries. The house is circa 1360 in origin and is timber-framed with brick infilling. There have been many alterations over the centuries. In the mid-1850s, the south elevation was tile hung and a Victorian porch replaced the gabled mediaeval bell tower. It is a Grade II Listed Building. 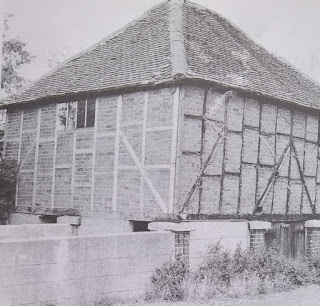 The 14th century Granary belonging to Bell Farm House was converted to living accommodation in 1963. As part of the conversion the pigsties beneath the granary (see top photograph) were made into garages. Bricks were turned weather face inside, and the whole timber frame raised to comply with Building Regulations. 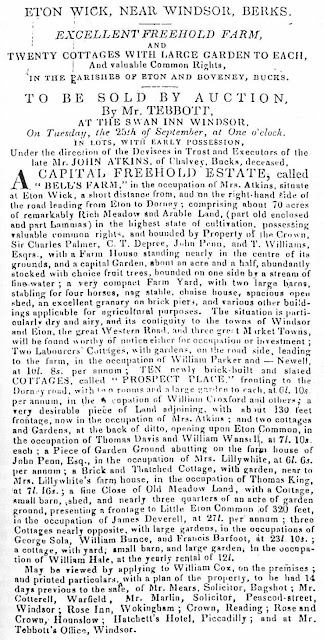 A clipping for the sale of Bell Farm estate. The description of the properties that were then part of the estate (including Prospect Place) and the names of the occupiers makes interesting reading. The reference to 'newly built' Prospect Place dates this to the 1830s.

This is an excerpt from A photographic history of Eton Wick & Eton first publish in 2000.
Copywrite Eton Wick History Group.
Posted by Steve Denham at 06:00