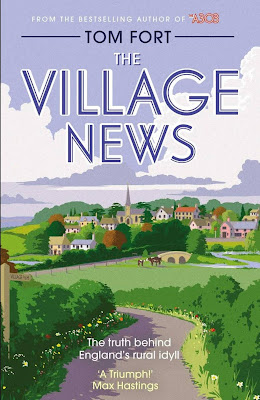 I have lived for over 40 years in and have been part of the life of two villages, Eton Wick and West Chiltington Common so when Tom Fort's “The Village News” came out I felt that I should get a copy. It is a fascinating collection of village stories that takes the reader on a meander through rural England both geographically and historically. From Twyford where his parents moved to when he was a year old in 1952 to Sonning Common where he currently lives his book looks at how villages have survived and what they need to make them work as communities.

His journey from Twyford to Sonning Common takes in Eversley, Luccombe and Chelsfield in the South of England to Troutbeck and Chopwell in the North. He chose his villages with care as most of the places that he has written about have either literary connections or researched histories written about them; these are referred to throughout the book.

Eton Wick may not get a mention, but villages across much of Berkshire are from Chieveley* in the west, home of Miss Read via Three Mile Cross, Miss Mitford and Sonning Common (used to be in Berkshire) to Twyford are covered and the changes that the passing of time has brought them. Eton College does get a mention as it is part of the history of Juniper Hill in Oxfordshire.

Juniper Hill was the village that Flora Thompson called Lark Rise in the novel of that that she wrote about rural life in the   North Oxfordshire community in the 1890's. One part of Juniper Hill's history is the experience of the area being enclosed by the landlord, Eton College. Mr Fort writes

"when it was enclosed the people would lose their rights to graze and take wood, and much more alarmingly would risk losing their homes." 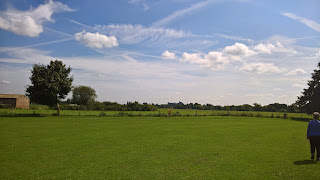 Eton Wick had its own experience with the threat of enclosure when John Penn attempted to gain the necessary legislation through Parliament which was defeated on 1st May 1826. Eton Wick is still surrounded by open fields, Lammas land and commons. And of course, Eton College is Lord of the Manor.

The story of Three Mile Cross contrasts with Eton Wick as both villages are close to major urban centres, but so far have different futures. Three Mile Cross which is part of the Parish of Shinfield* the area was subject to several Enclosure Acts between 1856 and 1863.  The village lies immediately south-east of the M4 – A33 junction and is being developed. There is a website for the Shinfield plan that shows where the national house builders are adding the new homes.

The Village News illustrates that every village is different and that actions and decisions taken in the past can bring about very different futures for the communities that live in villages. Eton Wick had a major growth phase from the early 1880’s with the development of Boveney Newtown starting on former farmland on the north side of the Eton Wick Road and west of Bell Lane. The growth continued through to the early 1970’s when the Wheatbutts was built on.

Mr Fort suggests an asset mix that can make a village successful. This includes in no particular order:

The village school, Church, shops and Post Office, sports and other clubs, families with young children and people how are prepared to be actively involved in making the community thrive. He also adds that finding space for small developments is important, Eton Wick offers all those. I think that as someone who has a keen interest in Eton Wick and looking through the lens of The Village News I would say that the village community has much to be proud of and some issues to be wary of.

Some notes on the growth of Eton Wick.

The census records for the older part of the village in 1861 show that there were 78 occupied dwellings with a population of 276.   By 1911 the village had gained a neighbour, Boveney Newtown on what had previously been farmland immediately to the west. The two communities, they both had their own Parish Council totalled 248 houses and 1026 inhabitants.  The population of the village at the 2011 census was 2260.

During 100 years between 1861 and when my parents brought their family to the village in 1960,  it gained a new school in 1888 and extended several times since to cope with a larger population. A Post Office arrived in the mid-1880’s as well as other shops. A new parade of shops was built by the local authority in the early 1950’s  and a second parade was added in the early 1970’s. The Village Institute/Hall, Scout Hut, Youth Club, St. Gilberts RC Church and Football & Social Club were added to the south side of the village between 1900 and the end of the 1970’s.

*Author's note: my own 3x great-grandparents, Richard and Asenath Povey lived in Chievely and had nine children including my 2x great-grandfather also called Richard.

Elizabeth Povey, a granddaughter of Richard and Asenath is recorded as having stayed at the Wheatsheaf Inn, Shinfield on the 1901 Census.