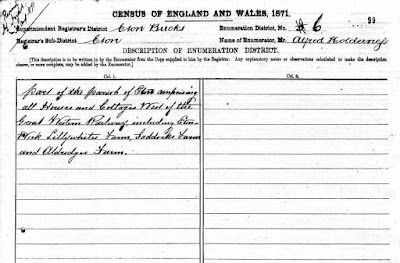 The area classed as Eton Wick for the 1871 census was part of the Parish of Eton comprising all the houses and cottages west of the Great Western Railway including Eton Wick, Lillywhites Farm, Saddocks Farm and Aldridges Farm.

The 1871 Census reveals that there were 106 households and 452 people resident in the village on the 3rd April. The oldest person, Mary Deverell age of 81, he was born in 1790. There were two other residents in their 80’s. Sarah Ann Croxford was youngest at three weeks old, she was the fifth child of James and Lydia. Sarah Ann was one of eight children recorded as being born inborn in the first three months of 1871.

Click on this link to see our transcription of the 1871 census records for Eton Wick. We will be looking deeper into what the census reveals about Eton Wick and publish our findings in future articles.
Posted by Steve Denham at 14:08